For the first lesson of my practicum, I taught a 1.5 hour class in ISCI 330A: Symmetry. One of my mentors attended the class and completed a COPUS evaluation. I also asked her to look for students that were off-task during the lesson because this is one of things that I’m considering using as a proxy for student motivation for my SoTL project next term. There are 39 Integrated Sciences students enrolled in Symmetry and almost all of them are in their third year of university. This is a course that I am quite familiar with as I am currently TAing it for the third time, and I have also been a co-instructor and TA for the summer version of this course that is offered through the Vancouver Summer Program. I think the combination of being a TA for the course and the small class size made this an ideal environment for me to teach my first lesson because I was comfortable with the material and more willing to try new techniques, and knowing the students made it easier for me to facilitate discussion and get questions answered. My familiarity with the course material also allowed me to devote more of my time to integrating teaching techniques into the lesson since I did not need to learn any new content.

The topic of my lesson was Frieze groups, which are 2D patterns that are translated in one direction. When I set out to plan my lesson I wanted to make sure that students were participating in the lesson as much as possible so that they would hopefully be engaged and be more motivated to learn the topic. My strategy to achieve this was add the following elements to the lesson:

For the retrieval exercise I asked students to take out a piece of paper and write down 3 things that they learned in the 2 lectures we had last week. I told them to do this on their own and without looking at their notes. This is something that I have seen one of my mentors do a lot in her lessons and it is a technique that I like and see the value in. It gets students to reflect on what they have learned, and if they are included in multiple lessons in a class, students will start to anticipate them and will ensure that they are paying attention to the lesson so that they can complete any retrieval exercises that come up. As a bit of a twist on what my mentor usually does, after I had walked around the room and gauged that most students had written down their 3 things, I got students to pair up and compare the things they listed. I told students that if there were any concepts they had listed that their partner hadn’t, they had to explain that concept to their partner. The reason I did this is because I think that students learn best when they are teaching others so I wanted to give them the opportunity to do so.

Since we don’t use iClickers in Symmetry, I planned to use ABCD cards (or as I like to call them, “clickerless-clickers”) during the lecture. I had used them before in this class when I was filling in for the instructor at the beginning of the term and, based on the feedback I received from a couple of students, students seemed to like them. Unfortunately I forgot the cards in my office, and only realized that once I had already started the lesson. During the retrieval exercise I mentioned this to my mentor and she suggested getting students to download the smart phone app so that they could use the ABCD cards on their phones, so I was still able to ask them the questions I had prepared. Almost all the students answered the questions correctly which helped me assess that I had done a good job of teaching the material. If there had of been a split between two answers for a question, I would have told students to turn to their neighbour and convince them that they are right, which would get students to think about the reasoning behind their answer and collaborate with others to gain more knowledge.

I designed the activity for this lesson with the aim of getting students to understand how the 3D point groups that were covered in earlier lessons are derived from 2D Frieze groups. Students are normally just told this during the lesson so I felt that they would end up with a much better understanding of the concept if they came up with it on their own. Students were each given a Frieze pattern and were asked to determine the symmetry elements that it had and the Frieze group it belonged to. I walked around the room to see or ask students if they had completed that task, then I told them to get into groups with the other students that had the same pattern as they did, resulting in groups of 3 students. They then had to tape the ends of their pattern together to make a 3D shape and figure out the new symmetry elements and point group of that object. As they were working on this I circled around the room to see if students had any questions, to monitor what stage of the activity they were at, and to ensure they were still on task. One problem that arose is that some of the patterns were simpler than others, so those groups completed the activity much more quickly and were getting off task. I got the students in the groups that finished their objects to join other groups that were still working so that they could work on another object and see how other symmetry elements transform from 2D to 3D. Their last task was to come up with a list of each of the symmetry element in their Frieze group and what symmetry element it was transformed into in 3 dimensions. We then went over these as a class to generate a complete list of all 2D to 3D symmetry element transformations, which ended up being the same one that is normally given to students on the PowerPoint slides.

At the end of class I asked students to fill out a brief feedback form. The three questions I asked were:

I wanted to keep the form brief because I feel that lengthy feedback forms often overwhelm students and the quality of the feedback suffers because of it. When I looked over my feedback following the lesson I was really impressed at how detailed some of the responses were. I was not surprised to see that the main thing students would change was to add more examples of how to find the Frieze group of a pattern. They also said that I can be shy when answering student questions and that I should be more confident with the answer I give, which is something I’ve never been told before and will definitely try to keep in mind the next time I’m interacting with students!

After the lesson I met with my mentor to discuss how it went. I thought the thing I did best in the lesson was to include lots of elements that could engage students in the lesson so that they didn’t get bored. I felt that the lesson went well and that the activity was successful, especially since it was the first time running it. My mentor gave me some suggestions of things we could add on to the activity so that students would get to work with more of the patterns. This would address the feedback they gave that they wanted to work with more patterns. Even though some problems arose during the lesson, I felt that it went well and that I handled the problems so that they didn’t throw the lesson off course. The main thing I would change is that I didn’t end up going over an example of how to determine the Frieze group of a pattern. I had planned to but I realized when I got to that place in the lesson that the example that I had put in the slides was the same pattern that I was going to give one group for the activity, so completing the pattern as a group would have given away the answer. In hindsight I could have pulled up a PDF file with more patterns on my computer during the lesson so that we could have completed one as a class as an example. Below are the results of my COPUS evaluation: 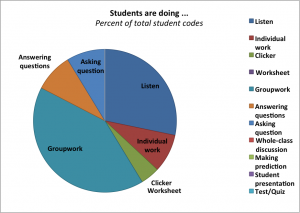 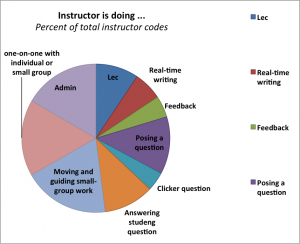