Last week I taught a class about geologic time in EOSC 110: The Solid Earth. This was the same class offered through Vantage College that I had observed two days earlier. Since this is a small class I decided to try a new activity since a smaller group of students would be easier to monitor to make sure an activity is going smoothly. I also thought it would be a good environment to try a new activity in because it’s a first year course and I was hoping that students with less university experience would be more forgiving if something didn’t go as planned. I also asked the instructor of the course to complete a BERI observation to monitor their level of engagement throughout the class.

The activity required students to construct a geologic time scale by placing key events in Earth’s history in order from oldest to most recent. Many of the events were the evolution of certain species, plus key features in Earth evolution that I thought they would have heard about without taking other geology courses. Examples of these include the appearance of species such as dinosaurs, birds and fish, the first appearance of macroscopic organisms and organisms with hard-parts, and the first fossil and oldest rock. I printed out cards with a picture of the events and a short description. Since there were 32 students in the class, I made two sets of 16 cards so that there would be one event for every student. I split them into two groups by giving everyone a small piece of coloured paper when they came into class. Since I handed out alternating colours it made sure that they wouldn’t end up with all the people they knew in the class, and would have to work with some people they didn’t know as well.

Before starting the activity I gave them a brief introduction to the age of the Earth and the concept of absolute age dating. From my pre-assessment (simply asking them how old the Earth was) I knew that everyone knew at least a little bit about Earth history, so I felt comfortable asking them to complete this activity. I gave them about 10 minutes to tape all the cards up on the wall in order from oldest to youngest, then we moved back to the desks and I revealed the correct order while occasionally asking them to tell me which event came next. I also tried to explain any common misconceptions, e.g., that mammals evolved after dinosaurs had gone extinct.

The results of the BERI protocol were somewhat surprising: the lowest point of engagement was not during the lecture, as I would expect, but while I was explaining the answer to a clicker question. However the instructor did note that they were likely chatting to each other, and therefore not engaged according to the BERI protocol, because they were surprised by the correct answer, so their perceived lack of engagement at that point may not have been a bad thing. Overall I think that I maintained a high level of engagement, and since I’m using that as a proxy for motivation, a high level of motivation throughout the class. Overall I had lower engagement than in my last practicum, but I think that some of that can be attributed to this being a first-year course in which students tend to be less engaged and motivated. Still, I can constantly try to increase the level of engagement in classes of all years that I teach in the future. 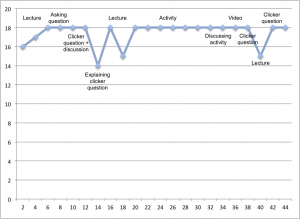 I also asked students to complete an anonymous feedback form at the end of class. It was very similar to the one I used for my last practicum, with questions about how they felt during the activity and one of the main lecture topics, as well as what they liked and what they would change about the class. Overall, most students felt “excited” or “interested” during the activity on geologic time and while learning about absolute age dating during the lecture. The vast majority of them said that the activity was the most interesting part of the lesson, as while as a video about earth history that I showed immediately after going over the answers to the activity. The main criticism they had was that I went through the material on relative age dating very quickly. I had thought that this part of the class was too fast, so it was good that their feedback backed up what I already thought. After doing the activity, there wasn’t a lot of time left to get through the rest of the lecture material, and I also wanted to make sure I had time to do my feedback form, so I ended up rushing through the slides and assigning some of the small questions I had intended for them to do in the class as homework. If I ever have the chance to teach this class again, I would cut out some of the material from earlier in the class to make sure that I could thoroughly cover the second half of the material, and also have time to do some of the examples I had planned in class.

There were two main benefits that I gained by teaching this particular class and group of students. First of all, I had already taught a class in the regular version of EOSC 110 for my practicum last term, so although this time was a different topic, teaching the same class gave me the ability to see if some things worked better in a smaller or larger class, such as clicker questions, discussions, and types of activities. I thought it was much easier to gauge when I had given enough time for a clicker question discussion, but that could also be because I’m getting better at clicker “choreography” (my mentor also mentioned this in our meeting after the class). This Vantage College class was also unique because all of the students have learned English as a second language, so I had to be conscious of what language and expressions I used to make sure that the concept was not lost in too much jargon. It also meant that a couple of my attempted jokes fell flat, but that sometimes happens with fluent English-speakers :). The second benefit was that it was a very small class compared to how big first-year Earth Science courses at UBC normally are, so it was easier to try a more complicated activity. It was exciting to try something that required a bit more preparation rather than just a worksheet that’s normally done for the class on geologic time. The classroom could also hold a lot more students than were in the course, leaving lots of room for the two groups to spread out for the activity, so it was even easier to implement than it would have been in a normal class setting. Overall, I’m happy with the how the class went and have some ideas on how I would improve it for next time.