Yesterday I taught a lesson in a third-year Integrated Sciences course: ISCI 330A – Symmetry. I’m quite familiar with this course as I’ve TAed it three times and have also co-taught it twice for the Vancouver Summer Program. Since I was comfortable with the content it allowed me to focus more on the activities and my interaction with students during the lesson.

I invited one of my mentors and another instructor to observe the class and complete Behavioural Engagement Related to Instruction (BERI) observations. Their observations showed that the engagement during the class was lower than in other classes I’ve taught. I noticed this as well as I was teaching the class and tried to make modifications to increase engagement. It was especially apparent during the pure lecture portion of the class during which I could tell students were getting off task and were not as interested in the material. To try to counteract this I ended up rushing through this portion of the class. In hindsight, this was a bad strategy because it came up in my feedback that I had gone through some content too quickly. Furthermore, although speeding through the lecture portion to get to an activity did mean that those students were engaged again at the beginning of the activity, they soon returned to being off-task after they had been working on the activity for ~10 minutes. 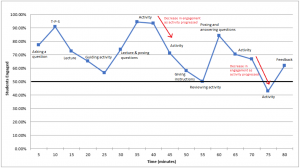 This class was the first small class that I’ve taught where I wasn’t also a TA for the course. Being an unfamiliar face to the students may be part of the reason that engagement was lower than it has been in the other classes I’ve taught. Teaching this class really made it evident to me how quickly students can get off-task. It seems like it’s better to alternate frequently between different teaching methods and activities than to have larger chunks of lecture and still include a really long activity. Engagement always increased dramatically when I switched to something new, but it would still decrease during an active exercise. However, that decrease was slower during an activity versus a lecture.

I ended up handing out the feedback form about 5 minutes before the end of class. Giving a bit of extra time to complete the feedback resulted in some very thoughtful feedback from a lot of students. I find that students often rush through feedback forms at the end of class because they have to run to their next class, and the resulting feedback is very brief and fairly uninformative. The extra time I allotted for the feedback was definitely well worth it. The most common comment was that the hands-on practice manipulating 3D objects and identifying their point groups (the biggest LO for the lesson) was helpful, and that the demonstration I gave to the class before the activity helped make this more clear. My rushing through some content was noticed in the feedback, so I’ll have to keep that in mind for my next lesson as I know I’m prone to doing that. 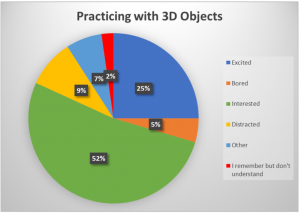 Overall, I had a positive experience teaching this class. I think that the biggest take away was all the detailed feedback I received from the students, which I can use to inform my teaching in my next class.