As identified on their BC government website, StrongStart BC is a series of “early learning programs [which] provide school-based early learning services for adults and their young children, aged birth to five, at no cost to families.”  My journey to uncover this program came as a result of reading a recent Vancouver Sun newspaper article, titled “Aboriginal education in B.C. gets failing mark“.  The article was prompted by the annual Fraser Institute report on education which concluded that aboriginal achievement and success rates in this province are unacceptably low.  The Fraser Institute report’s themselves are contentious as they are used to compare different schools and demographics of students to each other while including little-to-no data on elements such as socio-ecomic factors of the surrounding community.  Education Minister George Abbott is optimistic that recent initiatives such as the StrongStart program will help close the gap between aboriginal achievement and success and that of other students across the province.  I don’t believe there is ever one ‘cure-all’ for these types of issues, but certainly programs like StrongStart can’t hurt.  Let’s hope it makes a positive difference! 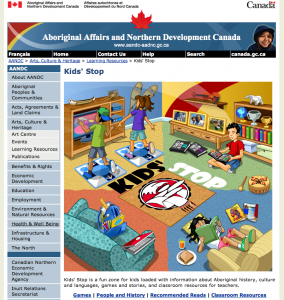 This website, created by the Canadian government responsible for Indian and Northern Aboriginals, is targeting Aboriginal youths.  The target age group appears to be early school age to adolescent with the range of available information.  On the main page there is a kid friendly cartoon image with 4 youths with different cultural backgrounds all participating in activities in a room with many Aboriginal symbols and art.  Links on the page include: ‘Games’, ‘People and History’, ‘Recommended Reads’, and ‘Classroom Resources’.  There are number of good links here, not only for students, but also for teachers.  A lot of the good information here for students appears to be geared towards Aboriginal culture and needs of Northern Communities.

As a North Vancouverite, I thought it would be interesting and beneficial to do some digging into the rich First Nations cultural history in my own backyard.  The Squamish Nation is amalgamation of many bands (I just learned this!).  The reason for their amalgamation in the early 1920s is eloquently explained in a great media production found on the Squamish Nation Network website.  I found the use of media on their website to be outstanding, particularly the informative and interesting 15 minute video I’ve provided the link to.  It’s a great example of First Nations People using media themselves to tell their own story.  I hope you’ll take the time not only to watch the video, but to explore the website and learn more about my neighbours, the Squamish Nation! 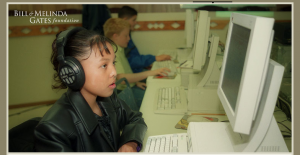 The Bill and Melinda Gates Foundation is the largest privately funded foundation in the world.  The primary aims of the foundation are, globally, to enhance healthcare and reduce extreme poverty, and in America, to expand educational opportunities and access to information technology. (wikipedia)  One of the programs run by the foundation is called the “Native American Access to Technology Program”.  I came across this program during my search for material on the digital divide and its impact on indigenous communities.

Providing access to technology has more than logistical complications.  There are also philosophical issues which go hand-in-hand with this discussion.  Some of the more salient points embedded in this issue are outlined in a paper by Dorr, Gordon & Gordon, found here: http://www.gatesfoundation.org/learning/Documents/NAATP.pdf The authors assert that it would be naive to conclude that simply overcoming connectivity issues change the fundamental economic plight of indigenous peoples in America. Underlying economic, social, and political realities that led to the lack of infrastructure also hobbled better solutions to the problems of technology access for Native Americans, and those realities are still with us.

Some details on the Bill and Melinda Gates Foundation, as well as the Native American Access to Technology Program can be found online here: http://www.gatesfoundation.org/nr/public/media/annualreports/annualreport04/programs/libraries/grantee.html 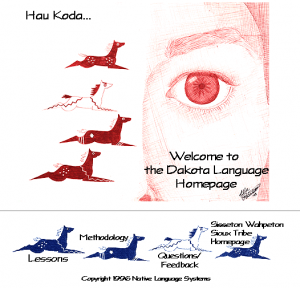 Dakota is a regional language spoken by the Sioux people.  Wikipedia identifies it as being closely related to and mutually intelligible with the Lakota language.  In doing my research on the digital divide and language preservation, I came across an old website (hasn’t been updated in years) that was attempting to preserve Dakota online.  I think its really interesting to examine websites such as this as they provide an almost historical perspective on what digital representation and preservation of indigenous language looked liked only 15 years ago.  1996 appears to be the last year the page was updated, however it seems to still have some value in language acquisition.  Check it out!: http://www.alliance2k.org/daklang/dakota9463.htm 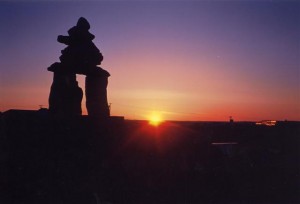 I’m trying to refocus some of my postings on here back to my proposed paper topic.  Lately many of my posts have been connected to Inuit culture as I find it personally quite fascinating.  Nonetheless, my post for today is actually a link to a project by a fellow UBC student named Cindy Plunkett.  For her ETEC540 weblog she has posted on digital literacy and one her emphases has been on the digital divide in Canada.  You can view her piece here: http://cleach.wordpress.com/digital-divide-in-canada/

The second paragraph deals with aboriginal education.  She cites academic sources in highlighting some of the unique challenges faced by aboriginals.  One of the top issues identified was connectivity and access to the Internet.  These will be items addressed in my research paper.