Analysis of poetry is hard, not because of the difficulty of interpretation, but because of the amount of different interpretations that can be gained from a single poem. Blake’s poetry is no different in this regard: while we can make some assumptions on his purpose with reference to his known life and religious faith, it’s impossible to be 100% sure of the meaning of his poetry. And this is exactly why I do enjoy analyzing poetry – it’s very interesting to see the different interpretations and perspectives each person may have for a single piece of writing. 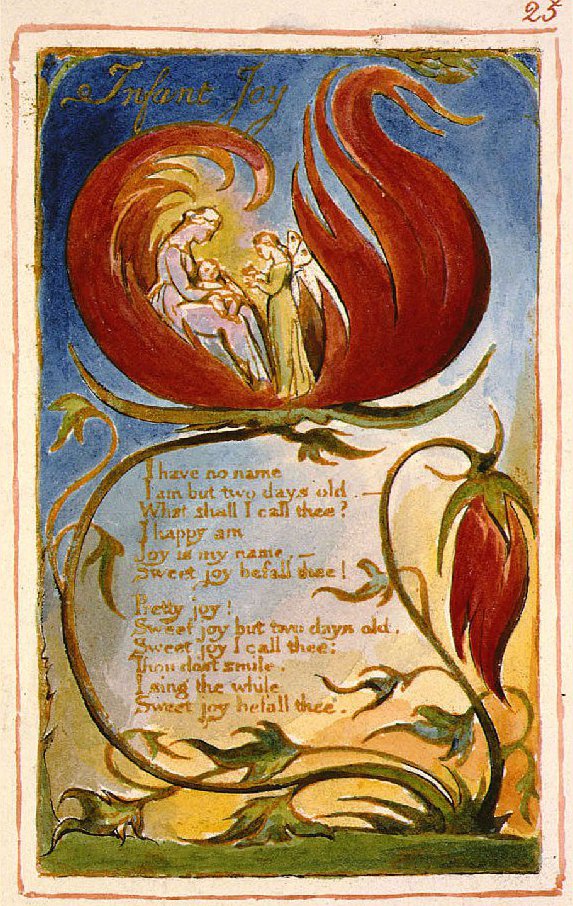 Infant Joy, painting and poem by William Blake (1789). In the public domain. Accessed from Wikimedia Commons.

Innocence, and experience – two supposed opposites of the human state, yet so interwoven. Innocence is the lack of experience, and thus cannot exist without it; if there is no distinction in levels of experience, then innocence would not be possible. On the other hand, innocence is the base standard, the comparison level to which the different levels of  experience are held to. Although Blake separates the two sections of his book with a clear distinction, there are many parallels and explicit similarities between poems of both sections. Take for example, the two poems, “Infant Joy” and “Infant Sorrow” – while both are very different in form and structure, there is a clear parallel between them, up to the point where even the colours of the art surrounding the poems share close links and draw from the same basic shades. “The Chimney Sweeper“ in the Songs of Innocence section shares the exact same name with its counterpart in the Songs of Experience section, and both share the same themes of despair and suffering (though the former does end on a much more optimistic note). Finally, there is “A Divine Image” near the end of Experience, which although was likely a later addition, is quite possibly meant to contrast with “The Divine Image” from Innocence.

The constant reference to children is interesting. Interesting not because of their presence in every poem (since they’re about innocence anyways, so it’s not surprising), but because of their portrayal in both the visual art and the poetry. Throughout Innocence, children are often painted with bright colours amidst fantasy-like settings: in “Infant Joy”, the titular infant is shown surrounded by family members inside the flower of a giant twisted plant. In contrast, “Infant Sorrow” shows a child in a much more believable place – a well-furnished indoors room, adorned with many artificial drapes and cloths. This is seen in other areas as well – the cover art of Songs of Innocence shows a woman and several children under a mesmerizing sky and a towering tree, while the art for Songs of Experience is painted with drab, urban colours and features the indoor area of a building reminiscent of a mortuary. Innocence equals fantasy, and therefore in a way, fake, and experience, the suffering, pain, and grief is the true reality of the world. It does not seem as though Blake is painting innocence and experience as contrary states of the human soul – instead, it seems like he is showing the falseness of innocence and the harsh reality that is experience.

One thought on “Songs of Innocence and of Experience”