Welcome! My name is Jess Borthwick (you may also encounter me as Jess Marlow, which is the name I use for social networking and creative work). I’m a fourth-year student at UBC, double-majoring in Theatre and English Literature. I’m a settler on this land, and I consider it a great privilege to live and study on the traditional, ancestral, and unceded territories of the Musqueam Nation.

I’m a feminist, an actor, a clown, a storyteller, a student of yoga, an activist, and a lover of fine tea.

ENGL 470A is a course that considers the intersections between European and Indigenous traditions of literature and orature, and the importance of storytelling as a tool for cultural exchange, growth, and resurgence. Not only will we encounter stories in literature, but we will also consider the stories we tell about literature: the course provides a platform from which to analyze which narratives gain a place in the literary canon, and which are excluded. It is entirely conducted online, and one of the exciting features of its format is that it requires a high level of engagement with social media, blogging, and other online tools in order to create a community of learners working together to further discussion about the future of Canadian literature. Speaking as one who grew up reading books and climbing trees, I must admit that I’m feeling a little trepidatious about the technical side of things, but I’m keen to embrace it as part of the learning process. 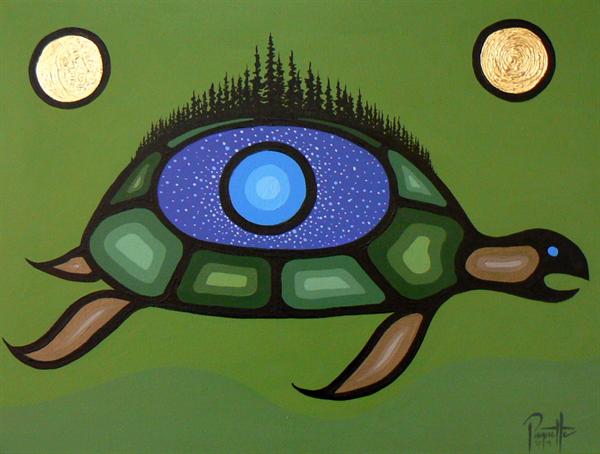 The story of Turtle Island is an Anishinaabe/Ojibway creation story

A great deal of my studies both in and outside of school have been concerned with Indigenous peoples and cultures on Turtle Island, and, in particular, the practices and traditions of storytelling. It all began when I encountered Tomson Highway‘s intense play Dry Lips Oughta Move To Kapuskasing in a Theatre class in my first year, which sparked a passion for learning about Indigenous stories and creating space for Indigenous voices on stages across Canada and the world. I have taken several different Canadian Literature classes since, including a fantastic course on Indigenous feminism and literature (ENGL 476, taught by the wonderful Dory Nason), and I keep finding myself coming back for more. As an actor and performer, stories are the most important part of my craft; as an ally and supporter of Indigenous resurgence, I recognise storytelling to be an essential part of cultural reclamation and celebration.

I hope that this course (while nudging me towards 21st Century technological skills) teaches me more about the canonization of literature, and that it will help to further my understanding of how Indigenous and European narratives intersect, informing my artwork and strengthening my own voice as it calls out for positive change.

I believe that, through listening to one another’s stories, we may help to foster a culture of mutual respect and community accountability, working together to heal the trauma of colonialism and creating a society that celebrates our various histories, cultures, traditions, and wisdoms.