Martin Chou’s blog on Foxconn’s inhumane working conditions talked about the serious issue of exploitation of the poor in developing countries. I totally agree with him on the fact that multinational  corporations are exploiting the poor people in developing countries such as China, India, Bangladesh etc and taking the advantage of their poverty to increase personal profits of the company.

With my research I found out that not only Foxconn, but all the big companies like Gap, Nike, American eagle, Guess etc are doing just the same. Nike has its manufacturing factories in China, Indonesia and Bangladesh where it has been criticized for it “sweatshops”. Nike is one of the top sports clothing brand accused by allegations of sweatshops and child labour. Workers in Indonesia complaint by saying that their “supervisors frequently throw shoes at them, kick them and call them dogs and pigs”. These labourers work all day long like slaves and not even earn enough for a basic living. This inhumane unethical practice needs to be stopped by the government as the rich will  always keep getting rich by exploiting 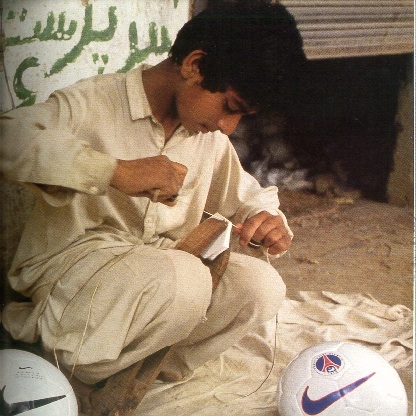 the poor. The governemnt of all these developing countries need to set a minimum wage which can atleast fulfilll the basic necessities of the people.

10 thoughts on “Exploitation of the Poor”