Last year, people in Butaritari Atoll, at the northern end of Kiribati’s Gilberts Islands began noticing these large spiny starfish depicted in the video above and photo below. The exotic-looking “crown-of-thorns” starfish, known as Acanthaster planci to scientists and latin-speakers in Brooklyn, is famous for preying on reef-building corals. Outbreaks of crown-of-thorns starfish can lead to drops in the amount of living coral on reefs, as has happened in places as varied as the Middle East and the Great Barrier Reef. 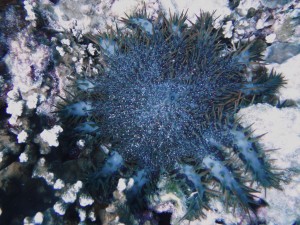 The Kiribati outbreak spread south to the central atolls of Abaiang and Tarawa over the past year. I filmed the shaky video above while conducting a coral reef survey in a, hmm, fast-flowing channel between the open ocean and the Abaiang lagoon (the word ‘drift’ is too passive to describe this dive; it was more of a ‘raging river’, ‘don’t hit anything’ or ‘I hope the boat can find us’ dive).

We’re not absolutely sure what initiated this particular outbreak or any other outbreak for that matter. Marine scientists generally suspect that over-exploitation of the few predators of the crown-of-thorns, like triton or ‘conch’ shells, is the most likely cause of such outbreaks. It is also possible that nutrient pollution can indirectly promote the spread of the starfish through increased survival of their larvae. I hope that, if funding allows, we can at least track the long-term effect of the outbreak on the coral reefs of the island chain.