Parent activist Patti Bacchus tops the polls with 64, 451 votes, outdistancing her closest competitor by a couple of thousand votes and the ninth candidate elected by nearly 20,000 votes.

Patti exemplifies the type of parent who gets involved because they care about education for all children, not just education for their children. Like many of us her first brush with education politics arose from her experiences as a parent, but Patti shows us that concern about education is a community effort. Patti has been involved in advocacy groups for special education, school seismic safety, and proper funding and resources for public schools. During the several years that I have been involved in the District Parents’ Advisory Council, I have had the opportunity to see Patti working as a parent advocate at the district level on a variety of committees and task forces. As a parent and community member I know that we will be well served by Patti.

Patti would make an excellent choice as the chair of the VSB.

University Town parents and community members identified five top choice candidates for school board. The local issue of new schools was a driving factor behind many University Town voters. Through a community-based process candidates who had demonstrated their concern and capacity for action were endorsed locally. The results show that, at least in our local voting, that our choices were on the top. We still have a lot of ground to cover though. Of the 5,800 odd people registered to vote only 423 actually voted. While some might say it is due to lack of engagement. It may be more appropriate to suggest that the biased manner by which election for the school board is managed is more at fault. The majority of University Town residents received NO OFFICIAL notification of the election. It was only through our local networks, such as the University neighbourhoods Association, that any notification was sent out. This is simply one more element of the democratic deficit that our community suffers from.

Nonetheless, we should take pride in the fact that our choices topped our local polling division. In addition we can very likely claim that our votes were significant to electing one of our strongest allies at VSB, Carol Gibson who just held on to her seat by 66 votes. 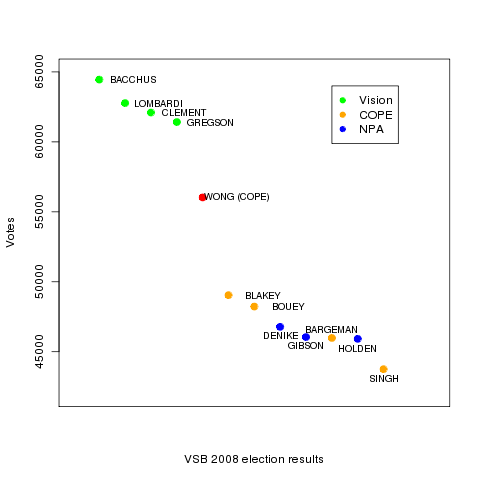