From the assigned readings you should have a good sense of the history and context for the manifestation of institutional review boards as they now exist (@ UBC, the Behavioral Research Ethics Board or BREB). In large part, contemporary IRBs result from a few well known and egregious cases of unethical treatment of people (like the Tuskegee Syphilis study, Mengele’s experiments in Nazi concentration camps, Milgram’s obedience experiments, Zimbardo’s Stanford University prison experiment, and Humphrey’s Tea Room Trade). In general, the response to unethical research practices might be described as a panic response that has resulted in a rigid system of reviewing ALL research prior to its conduct using a one-size-fits most approach (although there is usually a distinction made between lower and higher risk research).

However, Dyck & Allen argue that…

Review boards responsible for vetting the ethical conduct of research have been criticised for their costliness, unreliability and inappropriate standards when evaluating some non-medical research, but the basic value of mandatory ethical review has not been questioned. When the standards that review boards use to evaluate research proposals are applied to review board practices, it is clear that review boards do not respect researchers or each other, lack merit and integrity, are not just and are not beneficent. The few benefits of mandatory ethical review come at a much greater, but mainly hidden, social cost. It is time that responsibility for the ethical conduct of research is clearly transferred to researchers, except possibly in that small proportion of cases where prospective research participants may be so intrinsically vulnerable that their well-being may need to be overseen.

Within some disciplines (like history) there are questions about the relevance of IRBs to research, there are examples of ways in which the onerous task of obtaining IRB approval has truncated research efforts (such as during the SARS epidemic), and an unclear but no doubt significant influence on whether or not research is even considered.

Instead of promoting rote compliance with inflexible and universal rules, the role of an IRB should be to facilitate and resource the reflective practice of researchers. A simple, but significant, shift would be to move ethical review from approving a proposed project to providing guidance and feedback on submitted projects. An IRB may play a useful role in identifying ethical issues and suggesting how to deal with them, but otherwise, responsibility for research ethics needs to return to the researchers who use the feedback they receive in a reflective and project-appropriate way. Rather than policing compliance with standards that can have limited usefulness for some methods, participant populations and contexts, such an advisory review would aim to assist researchers in reflecting on the specific ethical challenges of their research.

DISCUSS WHAT YOU THINK THE ADVANTAGES AND/OR DISADVANTAGES OF FOLLOWING DYCK & ALLEN’S SUGGESTION MIGHT BE FOR YOU AS A RESEARCHER.

A doctoral student is preparing for her dissertation defense in a medical anthropology program. Her research on family relationships and child treatment discusses the borderlands of medical anthropology, child abuse and neglect. She has important theoretical contributions to make in the area of evolving cultural definitions of parent-child relationships among the subpopulation she studied. The student plans to publish her work, complete with many of the candid black-and-white photos she took of the children and families she studied. She is stunned by the evocative power of these photographs, but:

1. when she began her research, she did not include photographic methods as part of her application to the Research Ethics Board;
2. consequently, she has no signed permission from any of the individuals pictured in the photographs to use these identifying images in research or publication; and
3. some of the photographs portray evidence of physical violence with children that might be considered child abuse by professionals outside the study community.

DISCUSSION QUESTIONS
• What might the researcher have done differently so as not to be confronted with these dilemmas upon completion of the research?
• Did the researcher do anything wrong by using data collection methods not included in the original proposal? Why or why not?
• How can the dissemination of this student’s work be facilitated? How can the research participants be protected?
• Does the researcher adopt a utilitarian, deontological or virtues approach to ethics? Explain why.

I was interested in the changing nature of the relationship between schools and the juvenile justice system. Clay, a small and muscular 17-year-old whose detention hearing I happened to have observed was the focus of my research. Clay was accused of stealing a car and threatening a witness. Clay and I lived in a city renowned for its street gangs, teenage murder rate, and cocaine trade.

My participant/observation was limited to the youth court, its detention facility, Clay’s home, or his great grandmother’s home, and interviews were done in my office. In appreciation of his participation in the research, I offered to help Clay study for his GED and place a letter in his court file describing his participation in my project. I avoided observing illegal behavior.

Acquaintance with Clay’s family complicated the research experience. Serena, Clay’s mother, lived a desperate life, plagued in equal parts by poverty and her addictions. On my first visit to her apartment, I found that she and Clay’s third-grade sister, “Silk,” had been living without water for a month. The families situation lead me to offer help of various kinds—driving Serena where she need to go, giving a book as a gift to Silk (which was taken away by a school teacher who accused her of stealing it), paying the water bill, eventually trying to help Clay get a GED. Clay’s original conviction required him to pay restitution of $25/month and as a way of helping I paid him $10/hour for interviews with the understanding that the money would go directly to the court.

Throughout the research, Clay lied to others (judges, social workers, police) and continued to be involved in drug dealing and theft. His mother told me that Clay shot another boy, and he was subsequently convicted for murder.

DISCUSSION QUESTIONS
• Does the prohibition against harming subjects during research suggest a larger responsibility for their well-being? If so, does this responsibility extend to protecting subjects from risks that “do not originate with and are not the direct consequence of participation in research?” What is a researcher’s obligation to respond to human suffering?
• Who benefits and how from researching experiences like Clay’s and his family’s?
• Does the researcher adopt a utilitarian, deontological or virtues approach to ethics? Explain why.

Interpretive and critical research is dependent on human empathy. Empathic thinking is what allows us as researchers to ‘experience’ that which we have never actually experienced. The sense of dread when you hear or see a car wreck; the concern when a baby cries; the fear at hearing a scream. This video explores the evolution of empathy in humans, positing changes that have occurred in our brains over the centuries that enable us to not only understand one another, but to care for one another on a global level. 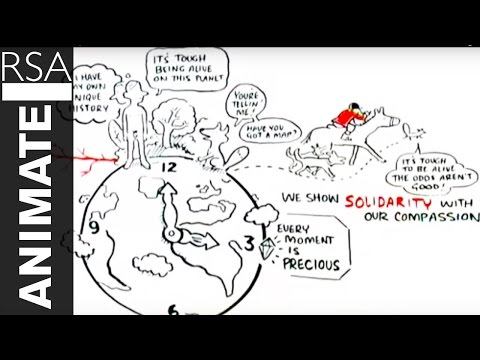