The new semester begins for many Universities with a ‘scholar strike,’ an action to draw attention to the Black Lives Matter movement, but also to all forms of racism and the privilege that many Whites have in relation to others, referred to collectively as BIPOC. (Black, Indigenous, People of Colour). This strike is meant to be a continuation of the need to undo Indigenous invisibility, anti-Blackness, dismantle white supremacy and advance racial justice. 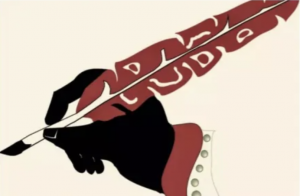 Representation of knowledge is often overlooked as a critical element of research and when we adopt taken for granted ways of writing, representing and publishing we ignore the growing concerns for BIPOC. One place to start is with this book by Gregory Younging wherein he develops a principled way of writing about and writing from within an Indigenous worldview.

Younging elaborates on this set of ideas for writing and publishing:

1. Avoid using the past tense when you write about Indigenous Peoples. 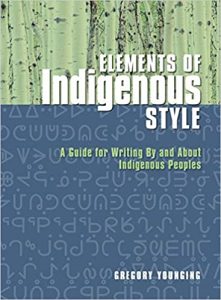 2. Do not use language which props up the colonial idea that Indigenous Peoples are incapable of taking care of things themselves.

This manifests itself in language that implies Indigenous Peoples have no agency.

3. Do not use the possessive when talking about the Indigenous Peoples who live in a country.

Canada doesn’t “own” the First Nations, Métis or Inuit Peoples who live in what is now called Canada.

4. Do not whitewash Indigenous Peoples out of history.

5. Think about Indigenous Knowledge as holding its own copyright.

6. Be prepared for consultation to take time.

Be aware that no one person is able to give permission; if copyright is held by a Nation, then there needs to be a proper consultation practice about sharing.

7. Collaborate and seek permission when writing about Traditional Knowledge.

If you’re writing about Indigenous People then contact them and discuss what you’d like to do. Be aware that Indigenous Protocols — which are more formal than “customs” — need to be adhered to, and often it may not be appropriate to write about matters which have sacred significance, or perhaps contain stories which may only be told by women, men, or at a particular time of the year.

8. Do not repeat inaccurate and offensive material.

Capitalization may not be where you’d expect to see it. Use Indigenous style: Aboriginal, First Nations, Indigenous, Elder,  Longhouse, Clan, and so on.

Be aware of the important role of Elders within Indigenous societies and their role as holders of Traditional Knowledge and as community advisors.

The Indigenous population in Canada is made up of Inuit, Métis, and some 634 different First Nations. Each has their own distinct Traditional Knowledge, culture and heritage. Avoid writing about ‘First Nations’ as though they are a homogenous group; instead, be specific and ask for people’s preferred self-declaration.

12. Understand Indigenous cultures do not need to be static to be authentic.

Indigenous Peoples are currently engaged in a period of cultural reclamation and rejuvenation. Indigenous cultures are dynamic and undergo natural change and adaptation, just like other cultures, and there are many manifestations of authentic indigeneity. This point is core to Thomas King’s work: The Inconvenient Indian and The Truth About Stories: A Native Narrative.