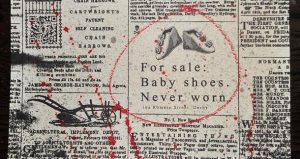 Six word stories have been around for many years now, instigated by Hemingway’s six word story, the title of this post. (Caution: there is dispute about this authorial  attribution, but I’ll take the story at face value here.) Hemingway’s story contains three elements, a 2-2-2 form. (Another common form is 3 -3 and these forms contribute to the aesthetics of the story.) The first “for sale” calls to mind a recognizable trope, followed by “baby shoes” a recognizable object, but it is the third element that turns this into a story. “Never worn” can invoke many possible meanings, but perhaps most common is the tragedy of child loss. Those baby shoes were never worn, because the baby wasn’t there to wear them. 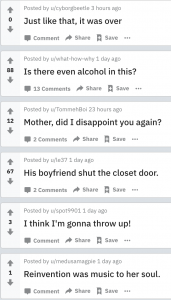 Six word stories have only one explicit rule… that they be six words. But looking more analytically at these stories they also seem typically to require something implied, something not explicitly stated in the story… the possible death of the baby in Hemingway’s story. This very short story form has a contemporary appeal in an age of texts, memes, and tweets.

Many six word stories are primarily about the aesthetics, but as the reddit examples illustrate they are also stories filled with meaning and the telling is heart-felt. There are plenty of pedagogical uses of six word stories, but they may be useful in research, especially narrative research. From a research perspective, whether six word stories are literature is less important than whether they provoke reflection, illustrate human experience and meaning, and perhaps whether they are a window through which we can see other stories.

While six word stories stand alone, they might also be prompts for more discussion of experience and meaning… a beginning to a more elaborated story.