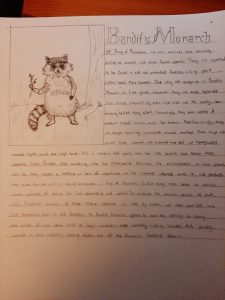 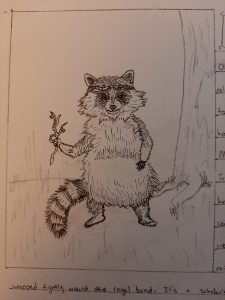 A Bandit’s Monarch, or King of Raccoons, are rare creatures most obviously related to raccoons and other forested rodents. They are reported to be found in old and untended forests, calling great hollow trees their homes. One may not recognize a Bandit’s Monarch at first glance, however they are made separate from average raccoons by their larger size and portly low-hanging bellies. Interestingly, they seem capable of constant bipedal motion as well, much like humans. More fascinatingly, they are always sporting immaculate crows crafted from twigs and animal bone, adorned with hardened tree sap and honeysuckle wrapped tightly around the royal band. It’s a scholar’s best guess that the little bandits have stolen these crowns from fairies after having wandered into The Otherworld. Whatever the enchantment on these crowns may be, they appear to bestow an heir of importance on the creature adorned with it, and perhaps even gives them the qualities required to become a Bandit’s Monarch. In fact, they even seem to exhibit human qualities of desire for land ownership and wealth (or whatever the raccoon version of that might be). Firsthand accounts of these elusive creatures are held by hunters and other poor folk who find themselves lost in the old forests. The Bandit’s Monarch appears to have the ability to sway the minds of other wild or loyal animals – most notably, hunting hounds, who, after making contact with a King of Raccoons, quickly turned on their masters, chasing them out of the Raccoon’s forested domain.