Now you shall allow me to introduce the beast, the most devious of all a legend in Mongol tales: the locals fear it so take it as a taboo banning the use of its name as if the beast is imagined. Yet now I assure you that the beast is undoubtedly real whose name is olgoi-khorkhoi or in our language the Mongolian Death Worm. The worm was first brought to sight by a traveller called Andrew who described it as ‘‘sausage-like’’ and compared it with other worms. No doubt the poor Andrew was deceived by the locals who feared the beast: through understatements and lies, they concealed their true nightmares. But now humbly shall I to be brave and tell the truth unravel the real like of the beast and shed light upon the silent darkness.

There is a well-known story told about the worm and a knight famous among Mongols but secret to the globe. It is believed that the story was at least three hundred years old dating back to the last Empire when Mongolia was under Chinese control. So here came our knight called by his Emperor traveling south from his tribe to the Imperial City of Peking. The journey was not simple but rather laborious and dangerous for it must go across the Gobi Desert where many travellers died. Yet the knight was no coward and was accompanied by his men; they marched into the desert with little fear and hesitation. It was on the fourth day of journey they encountered a sandstorm whose scale was unprecedented and during which they lost the knight. Now alone and ill-supplied, the knight lost his way; he wandered in the desert and was thirsty and desperate. It was by the night fall the knight saw a camp: it was in a valley where flags flew. The knight felt lucky and stirred his horse to the camp: he believed he found another knight, also called by the emperor, who would offer him a drink and lead him out from the desert. Yet when getting close the knight felt queer: the camp was entirely empty, and the flags could not be realised. Suddenly his horse was scared and threw off the knight; he heavily fell to the ground, and fear rose in his heart. Deep in the valley a shadow arose. A huge worm in reddish shell, legless, and eyeless. The knight was scared by the size of the worm for it was almost two metres long and now looked down from the height on the fallen knight. The knight drew his sword and waved on the evil, yet the sword melted instantly when it touched the evil’s shell.

‘‘Oh, petty knight, now what do you possess? Your horse has betrayed you and so does your sword. Realise these flags from your ancestors and heroes? They were but my feasts, prays, and walking meat! You Mongols are the most disgraced, dishonoured, and cursed hiding behind your steel and so boast your skill. Remember your Khan Mongke who conquered most of the world? Remember his mysterious death which was one of my works? Now see you the descendants of him who were poorer in skill but funnier in life; slaves of your former slaves, be sure to tell me how that feels. But now flee you petty slave but know that I am the master of your fate. Now flee you petty knight but spread my terror and might. For it if you disobey me this camp shall be the fate of your tribe.’’

The knight fled and dared not to reply but he sure told the story which now all Mongols learnt. Centuries now have passed, yet few have seen the beast: a true story turns to a myth, and whose threat is long discarded. Lucky was I informed by my families whose blood traces back to last Empire and in which they were knights, but now have I told you the truth, the threat deep in the desert, the ultimate nightmare of all, so guard yourself with knowledge and be aware of the beast. 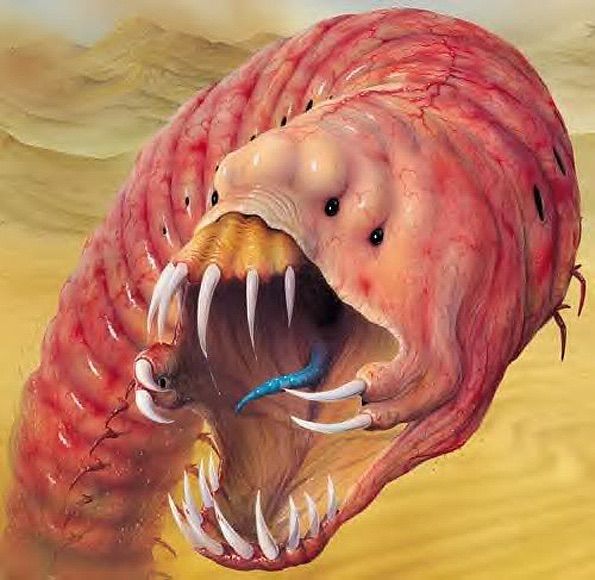 The Image is from: https://www.google.com/url?sa=i&source=images&cd=&cad=rja&uact=8&ved=2ahUKEwiKhsns6ZrmAhXO6Z4KHSGJCcgQjhx6BAgBEAI&url=https%3A%2F%2Faminoapps.com%2Fc%2Furban-legends-cryptids%2Fpage%2Fblog%2Fmongolian-death-worm%2FEw8M_1BtPu5qozx0W6XBGkNr1Zj0lo7LkE&psig=AOvVaw0vZhxUscRW0TJ7UqpqZO0k&ust=1575508799674587