A story from Nunivak Island 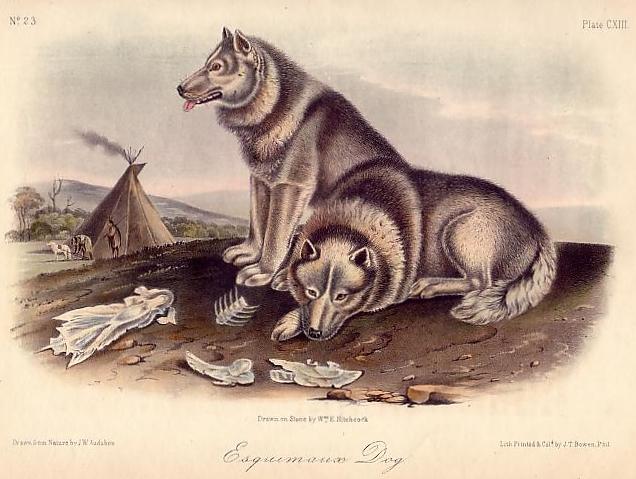 I want to tell a story from Nunivak Island, Wolves as human beings. I think it gives a great insight to Nunivak culture and their perception of animals. Also, this story gives a new perspective to the human-nature relationship I try to investigate: It is not always the simplified, respectful relationship towards nature and other forms of live which western society likes to think of. Sometimes it’s more complicated.

A man once found a wolves’ den. He saw young wolves in front of the den’s entrance. He clogged the entrance to the den so that the young ones were unable to get in and he played with them. After a time he went home without having seen any of the old wolves.

But as he walked home, the father and mother wolves ran after him. The male wolf gave him a blow against the legs. Although he had a weapon, the man did not shoot.  He told the wolf to quit doing this. If it became too much for him, he would shoot it dead. At that the wolves stopped bothering him and trotted a ways behind him. They spoke a language that he could not understand. Ion that way they followed him until his legs hurt. Eventually, when he had enough he shot the male wolf in the chest. Then they left him alone. And so he came to his village. It wasn’t a real village but a hunting camp in which his wife and his sons lived all summer long.

Later in the fall he slept there once in the small men’s house. There somebody woke him up. When he was a wake, he saw a young man in front of him. The stranger said he would like to take him outside. As they stepped outside, another man waited there with a large sled pointed in the direction of the mainland. They let him take a seat. But they asked him to sit in front and not farther back as usual. It was a moonlit night. They traveled until daybreak. Then the two said, “We are so tired! We want to get someone else to take you farther.” When he got up from the sled, he saw that a village lay just beside them. Two other people came. The left half of their faces continually twitched while the right half was completely stiff[1]. They brought him to the village. In front of the men’s house stood a large stake. Inside he found many people and in a corner one wounded man. He was asked to take his place on the seating board. He also was a man sitting beside the door.

The people said that someone should bring him something to east. A young man went out and brought dried wolf meat. The man at the door, however, told him to eat it. Another asked him to remove the bullet from his son. Then the man remembered the wolf he had shot. He said, “I didn’t shoot at the wolf right away, only when he wouldn’t leave me alone.”

The father said to his son. “I told you before, you should not act rough against human beings because they have bullets which one cannot see.” The stranger told the wounded son that he should lie down in the middle of the men’s house. Then he too his knife, cut open the wound and removed the bullet.

Some of the people had traps on their hands and said that human beings had done this to them. Then they played with the man. They hung him u by the feet and pulled him high, but he fell down. After that they drilled a hole through the base of his nose and lifted him up again, but again he fell down. Mow they made a hole in his hand between thumb and index finger but he still fell down.

There were three exits to the men’s house, one above the other. The man was told that if he went above or below, he would never return to his village. Only the center opening would be right. The man by the door said this. This man indeed was his late grandfather. Actually he had wanted to take off the people’s traps, but he thought that it would be better to depart as quickly as possible. He went through the center opening and saw his village. When he looked around however, there was nothing there. As he came home he thought that hit had been just yesterday when he left. But it had been a whole year.

[1] This tells the listener about their true nature: Iricit are extraordinary people who appear alternately as small humans, foxes, wolves or killer whales.

Retrieved from: Hans Himmelheber, 2000: Where the Echo began