A film about the peoples of the Skeena River 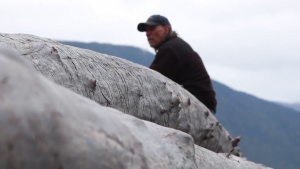 Between 2012 and 2017, an industrial project was being planned in the Northwest of British Columbia, Canada. Lelu Island, the chosen location for Pacific NorthWest LNG , is an ecological bottleneck for the second largest salmon bearing river in Canada.  The First Nations of the Skeena River fear the loss of the salmon, which is part of their food and culture. However, they also hope to decrease poverty in their communities through cooperation. In the form of an interview-based documentary, the impacts of the LNG project on the First Nations of the Skeena River are investigated. The 5 years of consultation have changed the First Nations, leaving them divided. The film explores the social impacts of an industrial project that never happened.

Screening at the Global Eco Filmvestival in Zurich: 9/23/2017

Or watch The Island Business now.