This week we looked at populism and Argentinas’  first lady Evita.

This week we learned of the concept of populism political representation.  When I googled the definition of populism I got a vague answer; “A political approach that strives to appeal to ordinary people who feel that their concerns are disregarded by established elite groups”.  I then thought don’t all politicians make an attempt to sympathize with the citizens of the country they are looking to lead?  As I continued to read the lecture I learned that a lot of the politicians I thought about could be considered populist.  I also learned that this term was hard to define because of its overuse.  It has been used to describe many politicians, this makes populism hard to define because it is used to describe so many. 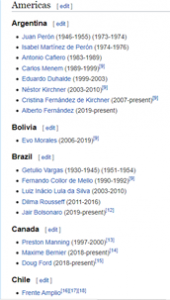 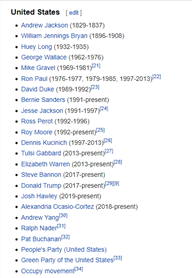 This is a list of Populists in the Americas. (via Wikipedia)

A well known Argentinan populist is Maria Eva Duarte de Peron.  Evita,  as she is named by those who loved her, she became an icon for her humanitarian efforts.  Evita was born into a poor family, she left her childhood home as a teen to become and actress in Buenos Aires.  She met her husband at a fundraiser.  They got married a year later and she began her fight for women’s rights and working toward providing aid to the poor class and children and women.

Her humanitarian efforts led to her follower’s love and support for her run for Vice Presidency. In fact, when she had to resign from the run her supporters rejected her decline.  She would have been able to continue her candidacy with her husband if she wasn’t diagnosed with cancer.  This cancer took her from her loving support at the age of 33.  There were some things she did that have continued a legacy for Evita. In fact, there is now a museum all about it. 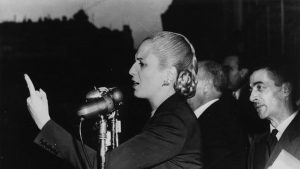 Something that I learn through my own research is that she can be seen as a hypocrite.  Some see her lavish lifestyle that she lived as hypocritical.  As she continues to help out women and children who are poor while wearing expensive clothes and jewels is seen as a hypocritical act.  Those who didn’t like Evita had this as one of their reasons to dislike her.

What are your thoughts on Evita? Is she a humanitarian or a hypocrite?

Here is the video of the Evita Museums’ opening.