With all the drinking and celebration going on, it is easy to forget the origins of St. Patrick’s Day. March 17th commemorates the day that St. Patrick’s died. A Roman boy enslaved by the Irish, Patrick, helped bring Christianity to Ireland peacefully in the fifth century. Legend has it that Patrick used the shamrock, with three petals on its stem, to explain the Holy Trinity while converting a pagan Irish King.

I was most excited about this day in particular, at the beginning of the program, given the opportunity to come up with cultural festivals to celebrate throughout the year. And I am glad (as someone who had not celebrated St. Patrick’s day before) that we have our own Irish champ in the class, giving us an even better excuse to go celebrate the day. On a day where our ethics class proposed that it is our responsibility to go green to protect the environment, we did exactly that. We had a challenge to see who could wear the most green on the night and there were many contenders for the winning spot. Camille looked elegant with her green dress and brown shoes. Mandeep showed up with the brightest green jacket that I have ever seen in my life. And Shamsheer showed dedication with a green shirt and a matching green turban. 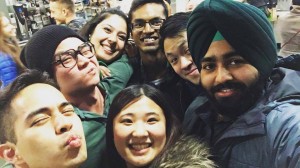 While the folks were enjoying, the waitress happened to tell me a funny joke that I would like to share. She was waiting tables one time when an American stumped her with a drink order. She took the order and approached the bartender, “Have you ever heard of a drink called ‘Seven young blondes’? He admitted he had never heard of it and grabbed a guidebook to look it up. Unable to find the recipe, he asked her to tell the patron that she would be happy to get the drink made if he could list the ingredients for her. “Sir”, she said, “can you tell me what’s in the drink?” The American looked at her like she was nuts. “It’s wine,” he said, pronouncing his words carefully this time, “Sauvignon Blanc!”