Population, Rhetoric, The Spanish, The Haida and Darmok and Jalad.

“We began this unit by discussing assumptions and differences that we carry into our class. In “First Contact as Spiritual Performance,” Lutz makes an assumption about his readers (Lutz, “First Contact” 32). He asks us to begin with the assumption that comprehending the performances of the Indigenous participants is “one of the most obvious difficulties.” He explains that this is so because “one must of necessity enter a world that is distant in time and alien in culture, attempting to perceive indigenous performance through their eyes as well as those of the Europeans.” Here, Lutz is assuming either that his readers belong to the European tradition, or he is assuming that it is more difficult for a European to understand Indigenous performances – than the other way around. What do you make of this reading? Am I being fair when I point to this assumption? If so, is Lutz being fair when he makes this assumption?”

It is an interesting topic, why we make assumptions the way we do.  In our particular case, Lutz is writing for a specific audience in First Contact as a Spiritual Performance, Encounters on the North American West Coast. His assumption that the reader will be more familiar with European tradition than First Nation tradition, is a rhetorical choice. It is one he employs to make it easier for the reader to understand how Europeans made first contact and how challenging it may have been. By understanding the challenges of first contact through the lens of a familiar tradition, he asks us then to “attempt to perceive indigenous performance through their eyes, as well as those of the Europeans” (Lutz, 32.)

It is not an unfounded rhetorical decision to assume that the reader will have an easier time understanding European performance than First Nation’s performance. According to a United Nation’s Live population tracker, Canada has a population of 37,152,262 people as of today February 8th 2019.  The last religious survey conducted was back in 2011. The population at that time was 32,852,320 people. I grant that population has changed drastically since 2011 and our religious survey information is out of date. However, working within the available information, we see that their were a total of 22,102,745 confirmed christian practicers, while there were only 64,935 confirmed who identified themselves to believing in a “traditional (aboriginal) spirituality.” There is a massive difference in number of people who would be more familiar with traditional christian stories than traditional First Nation stories.  We can also assume that people of Muslim faith and of Jewish faith, both being Abarahmic religions with a long history of trade and contact with Christian society, would have a much similar understanding of christian tradition than First Nation tradition. There were in 2011, 329,495 confirmed Jewish practitioners in Canada and at that time there were 1,053,945 Muslim practitioners.

Due to population alone (in 2011) we can see his choice was probably most likely a wise choice, if his intention was was educate about the challenges of first contact.

The other implication our prompt question has us consider is that  “he is assuming that it is more difficult for a European to understand Indigenous performances – than the other way around.” I do not believe this is an assumption that Lutz makes and it is unfair to imply that he is making it.  Lutz assumes we will be familiar with the technology and the spiritual beliefs of the Spanish during First Contact with the Haida, because “we have insufficient distance from our own and our ancestor’s view” (Lutz 32). He then makes a special case to inform his reader how First Nation’s people may have had extreme difficulty understanding European culture as well. Lutz details a possible First Contact scenario involving First Nations rationals and spiritual practices appear quite reasonable when applied to the context of spiritual belief. The use of “dousing oneself in urine” to ward off spirts makes sense, if that was a embedded cultural belief. “being afraid of eating maggots” and seeing “skulls with rope running through their sockets” would terrify anyone if the sight was misunderstood.

It is difficult to understand anything without context. This is his Lutz overall point in the article. Because he assumes we have context regarding the European, Christian mythology, he uses this context as a way to help the reader understand why First Contact happened the way it did by providing spiritual context from the Haida perspective.  The implication that it is more difficult for one party to understand the other is an invalid point. Lutz shows quite clearly that both parties had a great deal of difficulty understanding each other.

There is a wonderful Star Trek the Next Generation episode dealing with exactly this topic. In the show Captain Picard is working to establish first contact with a race of aliens whose language is comprised of only references to their historical and mythological histories. The Universal translator had been destroyed and both Captain Picard and the Captain of the alien vessel became lost on an deserted planet awaiting rescue. Each Captain had to try to understand, not only language, but mythic history as well in order to understand each other and survive until rescue. The captain of the alien vessel kept drawing attention to a mythical first counter between two of his people called “Darmok” and “Jalad” at a place called “Tanagra”. Picard first has no idea who Darmok” and his compatriot “Jalad” was; however after considerable faith, understanding and patience Picard eventually learns that the people of this planet are not hostile and peace can be established through understanding of the repeated phrase “Shaka, when the walls fell.” 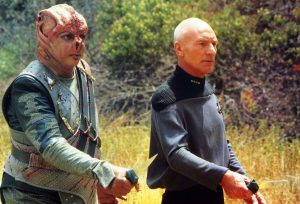 It is this understanding or misunderstanding of context and the willingness or unwillingness to accommodate beliefs that allow for peaceful or violent interactions between the Spanish and the Haida. It is Lutz’s point that context is everything and in our particular case religious context was vital.

5 Responses to Population, Rhetoric, The Spanish, The Haida and Darmok and Jalad.