Racism, Xenophobia, and discriminatory legislation in Canada’s Immigration Act of 1910.

In this lesson I say that it should be clear that the discourse on nationalism is also about ethnicity and ideologies of “race.” If you trace the historical overview of nationalism in Canada in the CanLit guide, you will find many examples of state legislation and policies that excluded and discriminated against certain peoples based on ideas about racial inferiority and capacities to assimilate. – and in turn, state legislation and policies that worked to try to rectify early policies of exclusion and racial discrimination. As the guide points out, the nation is an imagined community, whereas the state is a “governed group of people.” For this blog assignment, I would like you to research and summarize one of the state or governing activities, such as The Royal Proclamation 1763, the Indian Act 1876, Immigration Act 1910, or the Multiculturalism Act 1989 – you choose the legislation or policy or commission you find most interesting. Write a blog about your findings and in your conclusion comment on whether or not your findings support Coleman’s argument about the project of white civility.

In the early 1900s, Canada began to see an extreme exodus of migrants. Canada, still relatively young, felt it necessary to curtail the amount of work allotted for itself by excluding people who were deemed “undesirable” (Immigration Act of 1910, 208)  or bound to be a burden on the state. These people included an entire “prohibited class”. (Immigration Act of 1910, 208) 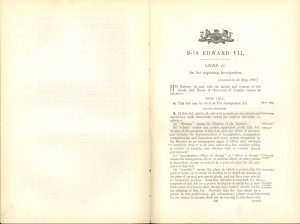 “b) Persons afflicted with any loathsome disease, or any disease that may be contagious or infectious, or which may become dangerous to public health.”

“c) Immigrants who are dumb, blind or physically defective, unless in the opinion of a board of inquiry officer…they have money, or a profession, occupation, trade, employment or any other legitimate mode of earning a living that they are not liable to become a public charge…”

e) Prostitutes, women and girls coming to Canada for any immoral purpose, Pimps or persons living off the avail of prostitution

“f) Persons who procure or attempt to bring into Canada, prostitutes or women or girls  for the purpose of prostitution, or other immoral purposes.

h) immigrants who have been given or loaned by any charitable organization enabling them to qualify for landing under this act…” (Immigration Act of 1910) It is noted in the explanation of this particular note that; “This condition was prompted by an influx of impoverished British immigrants in 1907, many of whom had received assistance from charitable institutions to facilitate their immigration” (Canadian Museum of Immigration at Pier 21, Immigration Act of 1910)

i) persons to do not fulfill or comply with any regulations which for the time being are in force and applicable to such persons under sections 37 and 38 of this Act.”

As we can see from this list, Canada was seeking only the “best” applicants for immigration and anyone who could possibly fall under the charge of the state was considered “undesirable.”  This extreme rejection of anyone who could not contribute well, or at all or had the likely potential of being any burden whatsoever on the Canadian government was rejected.  It seems that government immigration officials had full authority to arbitrarily decide whether a person was “desirable”

The act gave government officials absolute power, without transparency, to accept or reject any applicant as they saw fit. One such rule is as stands: ” Every passenger or person as to whose right to land, the examining officer has any doubt, shall be detained for further examination by the officer in charge, or by the board of inquiry and such examination shall be forthwith conducted separate and apart from the public, and conclusion thereof such passenger or other person, shall be either immediately landed or rejected and kept in custody pending deportation.” The veil of non public screenings no doubt allowed for an extreme number of unjust deportations.

The Immigration act of 1910 also paved the way for a permanent residency which we still employ today. On a personal note, I have several immigrant friends who say the process for immigrating to Canada isn’t terrible (in comparison to other countries) although is quite slow, still expensive and does not include many government assisted employment help. Transferable professions remain an insurmountable obstacle to many.  I found a wonderful report on employment and resettlement in Canadian Immigration. You can find it here.

The part that interests me the most is of course the systemic barriers to re-employment in Canada. It seems we are past our racist past. In the article mentioned above, It states:

” The obstacles to seeking work typically involve a
combination of credentialing, Canadian work experience, devalued foreign work experience, and language issues [25,36,39]. Hiebert’s [22] focus group
study revealed that non-recognition of credentials was
a common experience, along with visible minority migrants’ belief that education and training from the United States and European countries were deemed more
valuable than that of other source countries” (Melinda Suto, Compromised careers: The occupational transition of immigration and resettlement, 419)

The article goes on to say that a major reason for underemployment in immigrants is: “The reasons for foreign work experience being “heavily discounted by Canadian employers” … range from discrimination and racism based on country of origin, to ignorance
about the value migrants’ experience could offer an organization” (Suto, 419)

This is extremely disappointing to me. I was hoping we would learn and offer more acceptable transition for educated immigrants and less blatantly racist prejudices.  There are of course many other reasons why it may be difficult for immigrants to find suitable employment in Canada, but from the state of this article, it looks like our government has such an inefficient method of allowing for help with employment that it should be heavily looked into.

This assignment has reminded of me of article I had read in the Globe and Mail: Report on Business last year entitled “For Canada, Immigration is a key to prosperity”

In this article it states: “Why is this so important? Because without this immigration flow, Canada’s population aged between 20 and 44 years old would be declining. That cohort, which constitutes most of the labour force, is the one that creates new households, buys new houses, has children and pays the greater part of taxation revenue. Without immigration, Canada’s natural population growth would not be enough to sustain economic growth and welfare. Quebec, given its demographic structure, especially needs immigration to increase its labour force in the short term so as to sustain the costs of its social programs.” (Globe and Mail, For Canada, Immigration is a key to prosperity) This article has very little actual information. It seems to be a propaganda piece to make the Canadian Government “look good” while refusing to educate the common layman on its processes at all.

The Immigration act of 1910, unfortunately does not show Canadian’s fairness or aptitude for multiculturalism. It shows a racist, xenophobic and discriminatory attitude toward immigrants in the early 1900s.  It falls absolutely in line with Coleman’s notion of “White Civility”. The blatant disregard for public transparency and the self harming repercussions of such a piece of legislation is embarrassing and appalling to read and it appears Canada hasn’t improved much.

Gignac, Clement. “For Canada, Immigration Is A Key To Prosperity”. The Globe And Mail, 2018, https://www.theglobeandmail.com/report-on-business/economy/economy-lab/for-canada-immigration-is-a-key-to-prosperity/article14711281/.

4 Responses to Racism, Xenophobia, and discriminatory legislation in Canada’s Immigration Act of 1910.