“The emphasis on finding and describing “knowledge structures” that are somewhere “inside” the individual encourages us to overlook the fact that human cognition is always situated in a complex sociocultural world and cannot be unaffected by it.”                     (Hutchins, 1995, p. xiii)

Ed Hutchins has spent his “academic carreer trying to understand human cognition in social, cultural and material context”. He “believe[s] that cultural practices are a key component of human cognition”. In the mid 80s, he and his colleagues at the University of California, San Diago, developed the Distributed Cognitive theory–a psychological theory–where he claimed “that cognition is better understood as a distributed phenomenon” (Rogers, 1997, p. 1).  Cognition in the Wild (MIT Press, 1995) is Hutchins’ first attempt at a coherent statement of the principles of distributed cognition.

According to Rogers (1997),  “distributed cognition is a hybrid approach to studying all aspects of cognition, from a cognitive, social and organisational perspective” (p. 1).  The approach considers the “distributed nature of cognitive phenomena across individuals, artefacts and internal and external representations in terms of a common language of ‘representational states’ and ‘media'” (p. 2).

Therefore, using insights from sociology, cognitive science, and the psychology of Vygotsky, the theory emphasizes the social aspects of cognition.

Hutchins’s views of cognition contrasted with traditional views in which the focus was on localised phenomenon best explained as information processing at the level of the individual.  Within the distributed cognitive activities, technological artefacts and other tools and representations are utilized. Hence, the distributed cognition compared to other approaches has its own properties.

The following graphic illustrates the interelation between subjects and artefacts in action in order for the distributed cognition to happen. 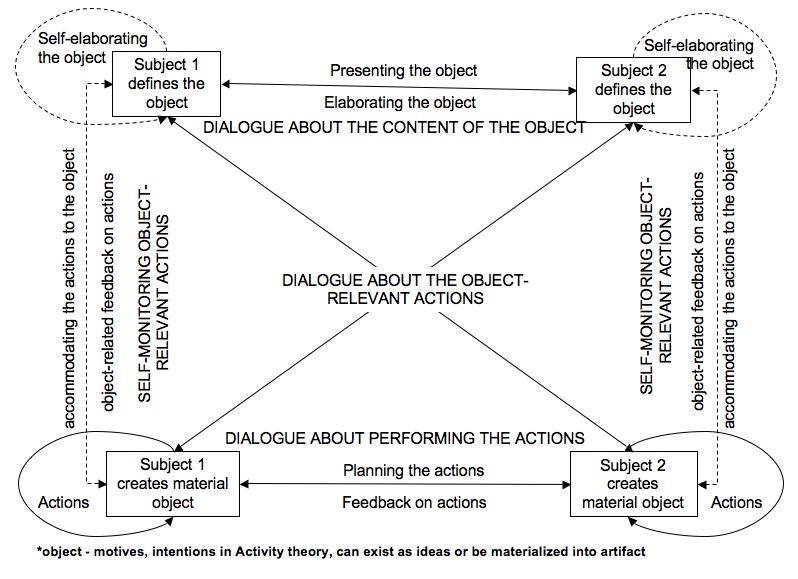 The following are some examples to explain when Distributed Cognition is seen.

Take a moment to think about the following questions.

Now, if you are interested about research, watch this video on Distributed Cognition as a Theoretical Framework for Information Visualization.

“Humans create their cognitive powers in part by creating the environments in which they exercise those powers” (Hutchins, 2000, p. 9)