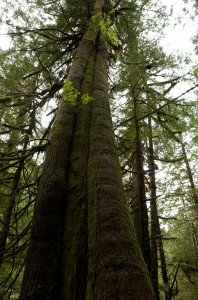 All along the BC coast and throughout the interior of the province evidence of ancient human practices can be found. One of the most intriguing is the result of the everyday Indigenous practice of harvesting red cedar bark. Cedar bark was (and remains so today) used for a range of everyday objects: rope, clothes, mats, baskets, etc.  The process of peeling bark (you can see it here in a video I’ve produced) is one portion of a longer process of harvesting, processing, and then manufacturing everyday items.  Bark wasn’t the only thing harvested.  One can find trees with entire planks removed.  Other trees were selected to build large ocean going canoes.  Other trees were modified with carvings or used as burial sites.  Taken together theses ancient trees that show the markings of human practices are referred to as culturally modified trees (CMT).  In British Columbia CMTs are protected under the provincial heritage act if the cultural modifications occurred prior to 1848.

This entry was posted in notable, survivals. Bookmark the permalink.