Seven years ago I blogged about an impressive arbutus tree in what was once a relatively untouched part of campus off Agronomy Road near Main Mall.  It was a splendid tree, lush, large, and magnificent. The same tree is greatly diminished today, overshadowed by the Vantage College prep school and encased within the walls of a preschool. 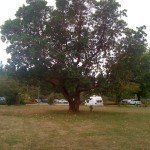 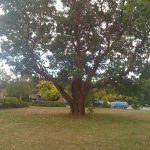 In 2010 the tree was resplendent in a field to itself.  It towered over the landscape, provided a sense of shade, and a visual sense of it’s unique and special self.  The tree was old (as urban arbutus trees go) and needed some love and attention. However, that was not to be. First the tree was  threatened with removal. Then it became encased in a development site. Finally to be locked, for the rest of it’s life within the confines of a daycare play yard (click on photos to enlarge).

In 2014  the initial plans for what is now the Hummingbird Daycare in Orchard Commons was to cut down the old arbutus tree. A few folks penned letters lobbying to retain the magnificent old tree. It’s not clear if the handful of letters made any difference (no response was received) but during construction of Orchard Commons it was clear that the tree was actually going to be kept.  It was, however, a sorry sight to see.  There was an orange plastic fencing dutifully placed around the tree. However, heavy equipment and building supplies compacted the surrounding soil.  Large machinery scraped away accidentally at the lower branches of the tree. As construction proceeded the orange fence became more ground mat than effective barrier. 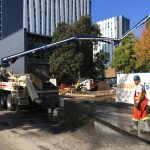 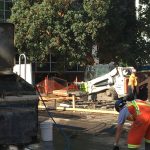 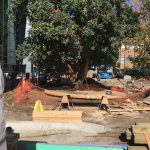 As construction on Orchard Commons and the Hummingbird Daycare proceeded it was clear that despite initial good intentions to save the tree the construction had seriously undermined it’s health. Subsequent modifications  (ostensibly to enhance the safety of the institutional occupants) may well have sealed the sad fate of the tree.

Concrete footings for an under-tree deck were drilled into the ground through the old tree’s extensive root network.  One day I happened by as a worker was sawing and hacking away at what appeared to be a very significant root.  It was hard to get pictures of that process as by this time the construction site was hidden behind a 6  foot tall barrier that made it difficult to take effective photos.  It seemed that the interence with the tree had come to an end but it wasn’t so.

Some time after most of the construction was over another period of work ensued.  This time to set up braces to hold up several of the old trees large limbs.  Further sets of concrete foundations were poured and then large structural posts set to brace the tree in place. It’s a sad near end of life for this majestic old tree. 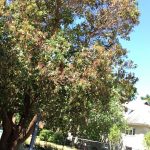 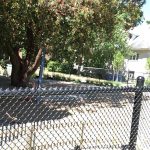 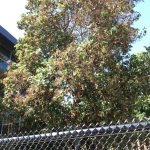 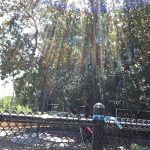 Today the old tree looks haggard and worn. Dwarfed by the post-modernist monstrosity beside it, hemmed in by decking and fences, and no longer able to support itself, the old tree gives the impression of an elder hovering on the edge of death.

I’m not sure if anything could have been done to alter the fate of this wonderful tree. Student gardeners in the former Orchard Community Garden tried to prevent or at least modify the plans for Orchard Commons to preserve open productive land – but to no avail.  UBC’s dominant pro-developer business agenda mandated that Orchard Commons be expanded to fully utilize potential housing and marketable density of the site.  Even with good intentions to maintain the tree there are so many competing factors at play that perhaps it would have been kinder to remove the tree at the start of the process rather than the long drawn out tortuous descent that has resulted.  I would like to think that even still it might be possible to pull a small miracle out of the hat and to revive the old arbutus tree that once stood so proudly on a quiet corner of UBC’s campus.

This entry was posted in notable, survivals and tagged memories. Bookmark the permalink.