Tonight, ESW is having our recruitment info session where you can come meet our current members and hear about our upcoming projects, including a collaboration with SEEDS Sustainability Program
The session will be hybrid, so you can join online or in person. 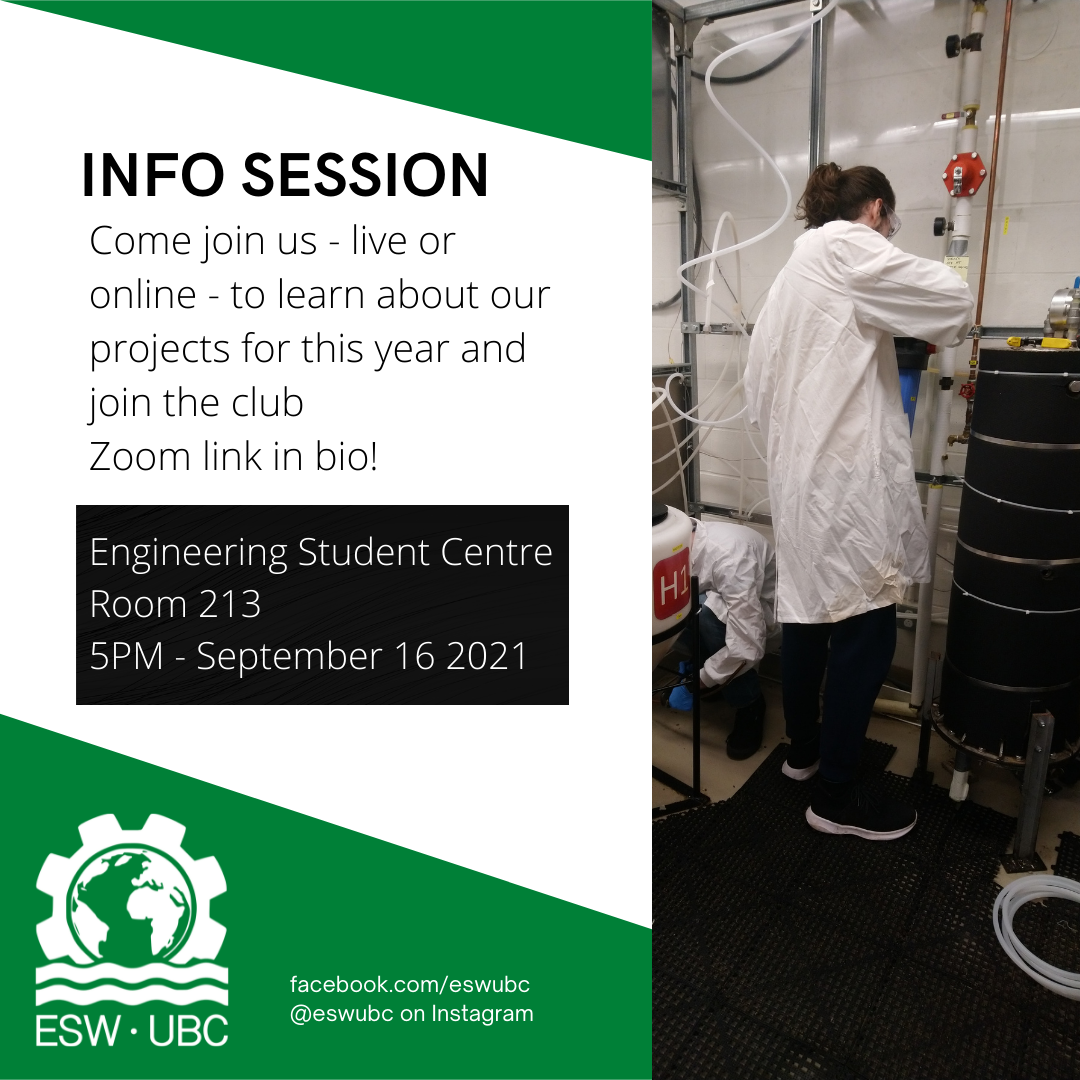 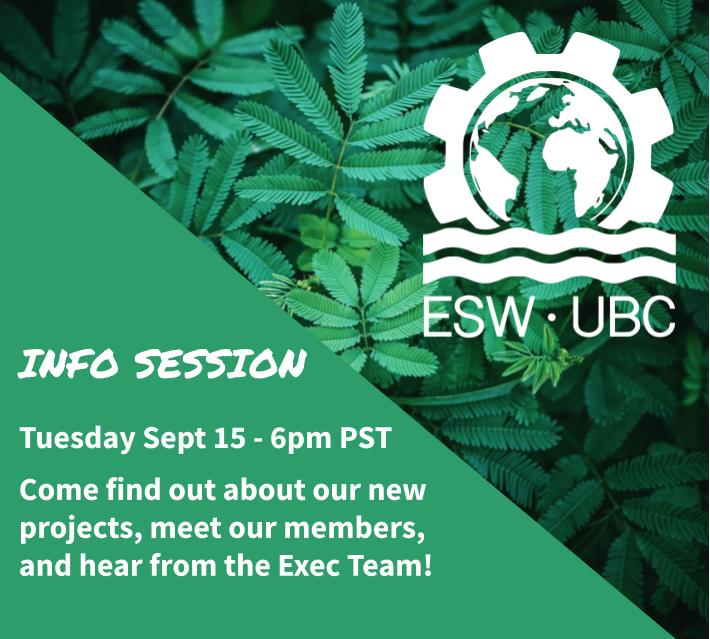 Welcome back to classes! I hope all of our members had a good winter break.

ESW general meetings will be held in FNH 30 on Thursdays from 5-6pm on the following dates:

General meetings are open, feel free to drop by if you want to hear about our projects and find out a little bit more about our club. Updates to any meeting times/locations will be posted on our Facebook page and Slack

Thank you to all of the members that came to the last general meeting of the Fall 2019 semester! The discussion topic of the night was the sustainability of public transport and transportation infrastructure, presented by Danie and Kira. 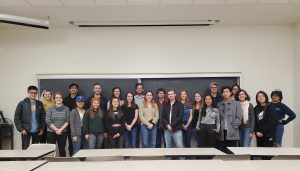 Projects will be continuing over the break at the project leader’s discretion, check Slack for details. We will be picking back up with the general meetings in January, check on Slack and Facebook for the meeting time and place.

Thanks for a great semester everyone!

Engineers for a Sustainable World is an international organization that seeks to drive sustainable development in an interdisciplinary, holistic fashion. Consisting of a strong network of passionate students and professional engineers, we are committed to a vision of a truly sustainable future. Current areas of focus revolve around clean air and water, as well as reducing reliance on fossil fuels and fostering the growth of strong alternative energy solutions. We invite people from any discipline, not only engineers, to engage with us in our bi-weekly meetings and discuss important topics related to sustainable development in Canada and around the world.

For the UBC chapter of Engineers for a Sustainable World, 2019 has been about renewal and growth. This year we have grown the club from less than ten members into a robust group of enthusiastic students nearly 40 people strong. As a project-oriented club with a savvy eye toward networking, we are actively seeking to engage the community at UBC and around the province to support sustainable growth in every sector. We put a lot of emphasis on empowering students to execute their vision. We are seeking to connect students with resources and interest groups that will help them to achieve their goals. This year we have more active projects than ever before, and we are looking for passionate people of all skill levels to help us work towards our goals.

Here’s a little bit about each of the projects we’re taking on this year:

In past years, ESW UBC has supported an undergraduate laboratory space in the chemical engineering building for producing biodiesel from restaurant waste oils. The lab is in need of upgrading and repairs.  Our goal for this year is to restore the lab to operational capacity and to give undergraduate students the chance to receive hands on experience with small-scale chemical processes, lab experiment design, and sustainable energy production.

ESW UBC has partnered with SEEDS Sustainability Program to produce a recommendation report on the possible development of a lab glove recycling program on campus. We will be investigating recycling methods, existing infrastructure, project constraints and budgeting.

Build day is a community initiative which challenges its participants to construct a sustainable installation in one day. This year, ESW UBC is designing and building a living wall which will be located in a high traffic area of the UBC campus. This installation will not only be a method of reducing pollutants present in the air, but also serve as a reminder of how student initiatives can make an impact on sustainability and carbon negativity on campus.

We will be designing and installing a water treatment process for a small community on Denman Island. This project is designed to not only improve the water quality of this community, but also do it in a sustainable manner, utilizing solar energy to power the pumps and water purification system.

ESW will be at the APSC Open House 2019 in the Chemical and Biological Building atrium from 10-4 on Saturday, November 2nd. Come drop by our booth and ask about our projects!

Hello everyone, it’s time to get the ball rolling for ESW again!

We are very excited to head into this semester and we’d like to thank everyone for the wonderful display of interest that we encountered on Imagine Day. In total we had over 150 people sign up to be informed of future events and meetings, which is very exciting! We had a lot of people asking about an info session for the club.

We will be having our first general meeting on Thursday, September 12 at 6pm in the CHBE building (room number TBD), and we hope to see you all there!

This meeting will function as an info session for people interested in joining, as well as our first general meeting for returning members. This will be a chance to check us out, hear about what we have planned for this year, and participate in a discussion about sustainability. Any and all who are interested in the club should come to this meeting and stay for as long as they would like!

Hope to see everyone there!

2018 was another year of learning and growth for members of the University of British Columbia’s chapter of Engineers for a Sustainable World (ESW). ESW is a mission driven organization with the goals to unite networks and empower engineers to tackle sustainability challenges.

The year began with monthly general meetings discussing topics such as sustainable consumption and plastics use, sustainable urban systems, and progress on Vancouver’s 2020 Greenest City Action Plan. Progress was also made on ESW’s biodiesel project. With funding assistance from a Shell Experiential Learning Fund (SELF) grant, ESW members were able to replace the oil filtration system for the pilot-scale biodiesel production lab housed in the Chemical and Biological Engineering building. Replacing the filtration system was a major step forward in allowing ESW members to demonstrate production of renewable biodiesel from used cooking oil collected from campus dining halls. 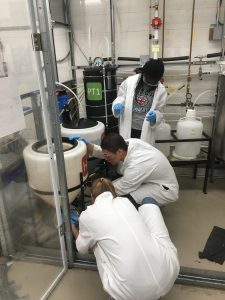 In March, members of ESW organized a successful seminar for the general UBC population focused on sustainable agricultural technology. ESW invited Dr. Andrew Riseman in the Faculty of Land and Food Systems to speak on future agricultural technology to meet food demands in growing and warming world. Dr. Riseman spoke about improvements in traditional approaches, such as crop rotations, as well as gave his thoughts on the buzzy topics of genetic engineering, AI, and robotics. 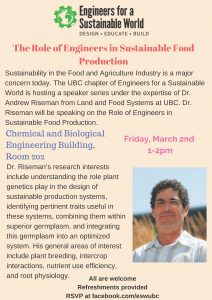 Three ESW members were fortunate to attend the ESW General Conference in Atlanta, Georgia in April, with support from the Walter Gage Memorial Fund, the Engineering Undergraduate Society Professional Activity Fund, and UBC’s Chemical and Biological Engineering Department. The conference offered the opportunity for these students to network with peers from ESW chapters from across the United States and Canada. The students attended workshops on sustainable design and heard from speakers, such as Coca Cola’s Director of Corporate Sustainability. Furthermore, a team of five women from UBC and Emily Carr University (not directly affiliated with the ESW UBC chapter) took first place in the ESW CommUnity Resiliency Design Challenge for their design of the “Neighbourhub.” The Neighbourhub is a post-natural disaster meeting place and functional water storage and energy generating structure. The structure was designed with input from UBC’s ESW chapter, and the chapter is continuing to work with the team (the Neighbourlab) to help them develop a prototype for their design. 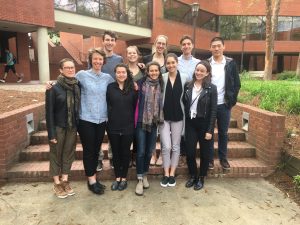 Members of ESW from University of British Columbia, the University of Guelph, and Emily Carr University at the ESW General Conference in Atlanta, Georgia (April 2018)

Fall of 2018 brought a change in leadership for the ESW chapter and a new cohort of recruited members. ESW has continued with monthly general meetings, discussing topic including the pros and cons of a sustainability labeling system for supermarket foods, and the merits of British Columbia’s new legislation on zero emissions vehicles.

In October, the chapter organized a community-building seminar by inviting Sustaingineering and UBC Solar to present their projects and network with members of ESW. This new initiative was part of ESW’s mission to strengthen the network of engineers passionate about sustainability challenges, and is something ESW plans to continue in 2019. A positive outcome of this seminar was the agreement for ESW and Sustaingineering to work together on developing a prototype for the Neighbourhub project, and UBC Solar offering to donate unused solar panels to the project.

ESW and Sustaingineering are continuing to work with the Neighbourlab team to develop the Neighbourhub prototype. The design will feature a fully integrated electronics system with energy generation from a solar panel and bike generator, as well as energy storage and displays. The teams plan to construct and implement the prototype along the Arbutus Greenway in the first half of 2019. 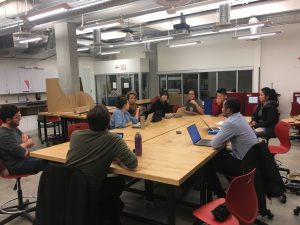 Overall, 2018 brought many opportunities for ESW members to engage and connect over sustainability topics relevant to engineering, and the chapter is excited to continue its activities in 2019. UBC’s ESW chapter is grateful for the continued support of the Engineering Undergraduate Society and the Chemical and Biological Engineering Department.

President, Engineers for a Sustainable World, 2018/19

This is the new website of ESW UBC chapter.

Formerly known as the CHBE Sustainability Club, Engineers for a Sustainable World (ESW) UBC is affiliated with ESW USA and the associated student chapters.

Our mission is to forge innovative, lasting solutions to local and global sustainability challenges. ESW-UBC achieves this purpose by planning and executing sustainable projects. The scope of these projects include engineering design, fundraising, advocacy, public outreach, and student competitions.

Check back here for information about our chapter including events and projects.