I can’t wait to see Prometheus, the fifth installment of the epic Aliens movies. I’ve spent chunks of the previous two evenings re-watching parts one and two, pouring over H.R. Giger’s creepy sketches online, and fantasizing about the “face-hugger mask” I could to design and wear to the theatre on June 8th.

It struck me how much the pronounced vertebrae and pointed tails of the alien resemble those of the brine shrimp adorning Artemia’s front page. Further research led to an interesting discovery: both aliens and brine shrimp have an amazing ability to produce eggs that can be left dormant for long periods and “hatched on demand.”  Both species are hyper-resilient, and able to subsist in various atmospheric conditions. In their different worlds, both species are profoundly involved in what Bruno Latour has called “laboratory life”  — places where the production of life, value and scientific knowledge are actualized. I’m going out on a bit of a limb here, but the point is straightforward enough: I don’t think any of these connections is coincidental. American pop culture knows very little about the world of brine shrimp (“artemia”), but it has an idea — largely informed by good sci-fi — of what it should think of all the shadow activity transpiring upon  them and similar life forms. I’m suggesting the Alien movies cast moral-epsitemological light upon the varied practices (bioprospecting, bioassays etc.) shaping contemporary incursions into the production of life and value. Consider this my sketch for the world Prometheus. 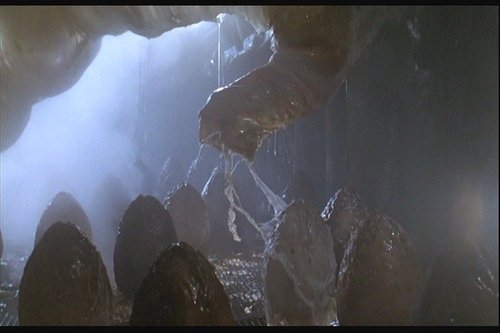 The Alien economy of reproduction.

The key, of course, is the egg, the ultimate symbol of life’s value and the ultimate symbol of life’s brutality in the Alien movies.  The egg internalizes the alien economy of reproduction, one which is exploitative, parasitic, and unflinchingly cruel: find a host, invade, use its life, unleash the beast within, repeat. And if there is one word which I think helps understand why this process is so scary in the films, its this one: ‘metabolism.’ Metabolism can refer to the set of chemical reactions that happen in the cells of living organisms in order to sustain life. For Marx, metabolism can be used in a social sense, to describe the “material interchange” or “exchange of matter” that takes places between humans and nature. The alien egg describes the fascinating interconnections between both.

Eggs in general tells us a lot about the ways contemporary economies work: producing life and squeezing productivity out of life, processes resulting in phase shifts in our worldly epistemologies and bodily constitutions — see Kaushik Rajan’s recent talk for more on this.  For Marx, the whole point of talking about metabolism was to describe the problems of capitalism — its characteristic feature of a “metabolic rift.” Capitalism “produces conditions that provoke an irreparable rift in the interdependent process of social metabolism,” he writes. Its certainly possible to read Alien as a horror of male pregnancy — of man going into labor — but I’m suggesting its the other way around as well: its labor, alien labor, going into man, man who suddenly becomes the material substrate for the alien’s “form giving fire.” What could better combine Marx’s “metabolic rift” with the terrifying implications of capitalism’s growing interest in the body as its new site of value production than the blood-spattered, chest-popping emergence of the alien life-form from the value-depleted human corpus? 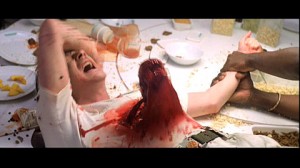 Alien meets crew: "my compliments to the chef"

Alien (1979) gets the anxiety going at high boil.  We begin in a world we are actually pretty familiar with: recall that the people responding to the distress signal are the agents of industrial capital: the working- class miners of the Nostromo. Their journey into the silent planetary underworld describes a society’s general entree into a new bio-economy. This is rendered quite stunningly as the Cain descends into the depths of the “alienated” ship. The dark endoskeletized stuff growing across all the infrastructure anticipates the way human bodies will get metabolized by alien bio-power.  And frankly, its these interior shots that made the first watching of Alien (me, age 8) so damn scary — the movie seems to have drawn more from the sweaty underbelly of feminist Minimalism — say, Eva Hesse or Louise Bourgeois — than the masculine geometry of other sci-fi movies: Star Trek, 2001 etc. It works with a whole new cultural logic of bodily anxiety, one which has had a huge effect on all the sci-fi horror lexicon since – Tremors (1990), Species (1994), Mimic (1997) etc.

It wasn’t until the late 19th century that Western science came to believe that parasites were separate creatures rather than manifestations of moral malaise generated within the body.  Alien puts us back in that earlier more doubtful period. It does this by asking us to consider the ambivalence of man’s metabolizing mission (miners, after all). Turns out they dig too deep.  And because of what happens, we are able to see how humans sociality really is, at its base, pretty nasty. Time and time again ‘the company’ will screw over the crew  — via the Android, Ash (Ian Holm), in Alien; or Burke (Paul Reiser), the executive, in Aliens; or the creepy doctor Gediman (Brad Dourif), in Resurrection. The morality of capitalism is always called into question via a company spokesperson. “Is this going to be another bug hunt?” Hudson (Bill Paxson) asks imperialistically in Aliens (1986). Successful parasites are ones that go unnoticed by the host body. For all his hubris, Hudson becomes the first one to crack, the first Marine to question the parasitic social relation he serves — disavowing the mission in memorable fashion (“Game over man, game over!”). 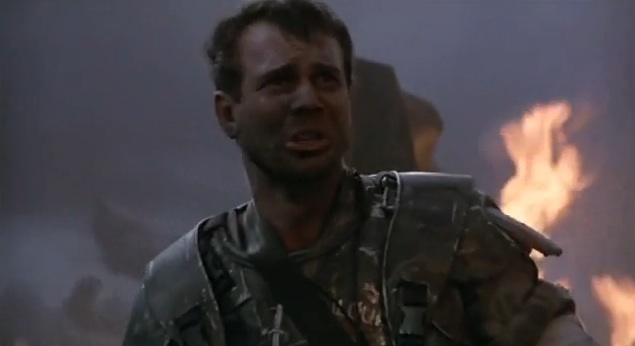 Recall all those laboratory scenes throughout the Alien movies; clearly scientists are fascinated by the thing.  As with artemia, the real value of the aliens is not in the beauty of their biological feat-of-life. Rather its in their industrial use-value –in the aliens’ case, as biological weaponry.  “At least they don’t fuck each other for a goddamn percentage,” an exasperated Ripley (Sigourney Weaver) tells us at one point.  To cope with all the exploitation, Ripley, our moral compass, has to go from outrage at the humans to a severely compromised one herself. Her metabolic transformations can be read as a purposeful alienation from comprised human sociality. This builds slowly, in the first movie it is revealed through her special compassion with another non-human – Jones the cat. In Aliens (1986), Ripley shows her willingness to adjust her humanity by going cyborg — donning a giant robot-like cargo-loader unit, and eventually beating an Alien Queen with it.  In Alien 3 (1992), she participates directly in the metabolic exchange. In its final scene, she accepts the destruction of her humanity, thrusting herself religiously into a pit of fire.  But escape from capitalism’s metabolic relation isn’t easy: in Resurrection greedy scientists on the space station Auriga cloned her back to life to crossbreeding tests on other humans. And because Ripley had the alien inside her, the new Ripley is transformed:  super-strong, acid-veined, needlessly tempermental. 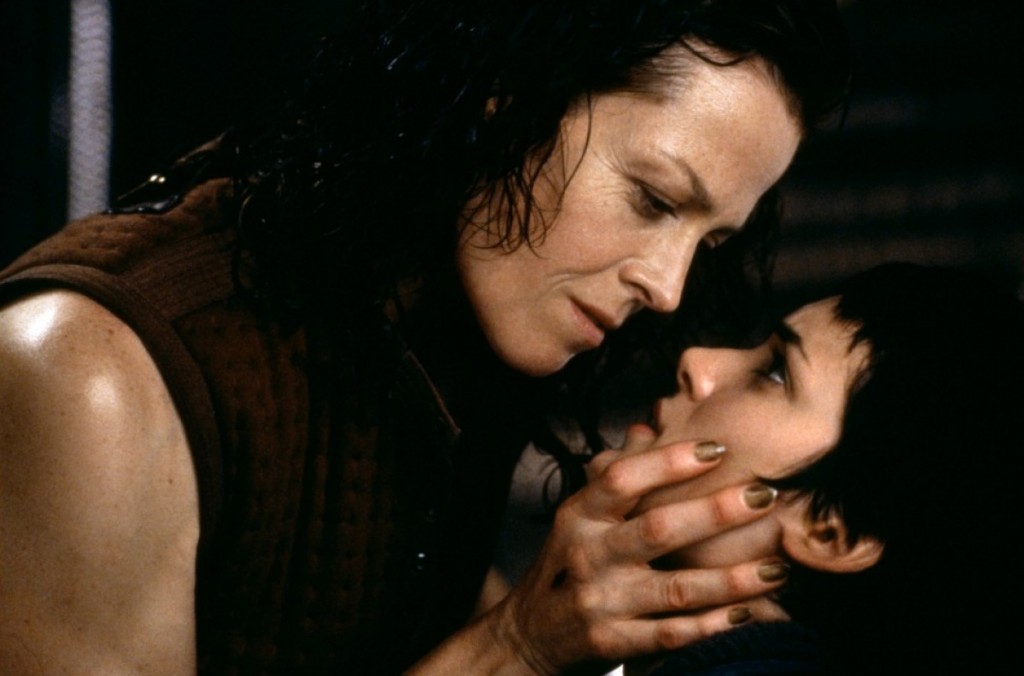 "Think you know how much Reality Bites, bitch?"

The alienation of Ripley is essential for her survival in society, but so is humanization of the alien. By the time of Resurrection (1997), the alien metabolism has been transformed in turn — the Alien queen now possesses a womb: it can give birth to live offspring without the need for eggs and human hosts. From this new metabolism emerges a new being — the Alien Queen/Ripley spawn.  Appropriately, its humanization contributes to its heightened terror: traditionally, parasites are not out to get humans; for many of them we are irrelevant or inadvertent objects to metabolize with. This is the impression we are left with in Alien (1979) and Aliens (1986) even to a certain extent up to Alien 3 (1992) — where the suffering of the innocent dog has us a little less convinced. But Alien Queen/Ripley-spawn in Resurrection (1997) seems to enjoy popping heads and observing the bloody remains. Ripley’s compassion for her offspring’s death — sucked, as always out of the airlock — has us feeling even more unsettled.

Its possible to read the awesome Alien movies in so many ways: as anxieties over motherhood and pregnancy, as warnings of scientific triumphalism, mediations on the new art of war, explorations into the sociologies of deep space discovery. I’m suggesting that we can also trace in them shifting anxieties over the metabolisms of life and the economies covering the bodies of brine shrimp and humans with sticky, slimy, and salivating forms of labor. The arc that I trace in the Alien movies suggests that this gradual merging of industrial capital and life sciences upholds not so much aliens, but the process of alienation — the external undoing of an internal self-recognition applicable to all species — as the truly freaky proposition.

This entry was posted in aliens, film, reproduction. Bookmark the permalink.