The other local Indian Band that my school is located on is Whispering Pines/Clinton Indian Band. There is a quote on the front of their page that sets the tone for this group.

Since time immemorial our ancestors lived in harmony with mother earth. We took from mother what we needed to survive. We cared for and nurtured our lands. We defended our Traditional Territory from outside invaders Our Coyote Rock stands as a Sentry Guardian and Protecting our Territory.

This quote on their page suggests the connection to the land and strong spiritual beliefs.

This website is very different from the KIB’s sophisticated site. There website can be found here at:

In the section about the Pellt’ip’t people, it mentions the importance of the following symbols

There is also a section on the site that contains:

It is quite obvious that the Pellt’iq’t don’t have the money and resources that the KIB have. They are in a more rural area and outside of the major city of Kamloops. This remoteness would impact their financial abilities.

Much like the KIB, they also have no map of territory and very little on their history on the web site. There is also no critical reflection on colonialism. But, this is about the only similarity between the two Indian Bands according to their websites.

Tk’emlúps is the Secwepemc word meaning “where the rivers meet” because their territory is at the meeting of the North and South Thompson rivers. The fact that the Kamloops Indian Band (KIB) now has changed its name on its website to Tk’emlúps shows how progressive they are. Perhaps they are trying to redefine for themselves what was taken during colonialism by changing their name. The website refers to Tk’emlupsemc territory. I did some checking and their legal name according to the Government is still KIB.

The website is very extensive, well designed and contains a great wealth of information. This site is divided up into the following main categories:

One thing I have noticed is that there is not alot of information on information on Secwepemc history on their website. They only have a few paragraphs and these are not critical of colonialism. In-fact, so far I have not found any parts of the site to contain information that is critical of the way the dominant culture historically teated the Secwepemc people. Why? I am not really sure, other than the front page has a focus on business development. I am also not seeing any maps showing their territory. I can’t help thinking that this has to do with something the Howe (1998) mentioned: publishing information on the web may hurt you case in court over unsigned land-claims.

There  is a link to the Secwepemc Museum on their site that takes you to http://www.secwepemcmuseum.com/. Here we find a little more detail on the culture; but again, I find little that is critical on whites. Again I have to ask why?

I have been checking out the web sites for the two Indian Bands that are in Kamloops and close by the school I work at. They are:

In another post, I will examine these sites in a deeper way.

The United Nations had the Declaration on the Rights of the Indigenous Peoples adopted by General Assembly Resolution on September 13, 2007. This declaration of the General Assembly is not legally binding, but it does serve as an acknowledgement of how important Indigenous peoples rights are. It also recognizes that there have been many injustices that Indigenous Peoples have gone through in the past and present. The full text of this can be found at:

Unfortunately there were four important colonial countries that voted against this: Canada, New Zealand, United States and Austrialia. In 2010, Canada has now given its support to the declaration. The Canadian government had previously said that it was not compatible with the Canadian Charter of Rights and Freedoms and that the Charter does not protect discrimination of Aboriginals anyway.

In case I have not been too clear on my topic for area of research from looking at the theme of my previous posts, it will be on Residential Schooling in British Columbia.

My final topic for the weblog will focus on the perspectives of First Nations in Residential Schools in B.C. I would like to have some of the focus to be on the interior of BC, but I am unsure at the moment of how much information there will be on specific Residential Schools.

Part of my focus will be on perspectives of First Nations, so I will be looking at some personal accounts of students who attended the schools. I am also wanting to do my research in this area to strengthen my knowledge and understanding to be better able to teach this in my classes.

This is my first draft and it is still early in the course, I hope to refine and focus the topic more as my research continues.

The resources here are very extensive. I especially like the 1950’s video clips where CBC does a report on what happens at Indian Residential schools. It paints a very glowing report and these primary sources are very valuable for historians and students alike.

Residential Schools were developed to speed along the government’s agenda of  assimilation. In looking at their experiences we gain the real message of the cultural genocide that was taking place. This web site has First Nations People’s experiences of colonialization the perspective of First Nation people. It contains seven video interviews. Remembering the Children Website, includes a timeline and apologies of Church groups. The Indian Residential School were funded by the Federal government, but mostly run by various church denominations across Canada. Below is timeline history from the Assembly of First Nations that outlines the history of Residential Schools.

Canada’s protestant denominations issued a joint paper outlining their apology in very specific terms. Click on the image below. 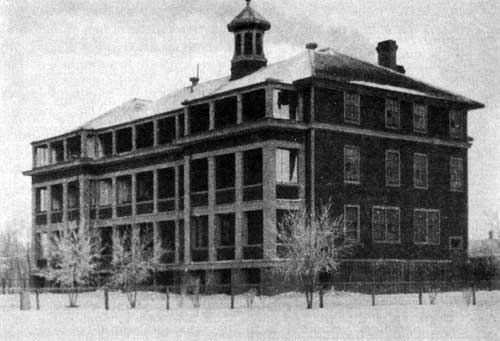 Read all the churches' apologies summarized together in one document

Source: The Anglican Church of Canada

The United Church of Canada also operated many residential schools throughout Canada. Here is a link of their involvement. The church issued it’s apology for involvement in Residential Schools in 1986. Here is the full text of their apology.

The Presbyterian Church of Canada also operated many residential schools throughout Canada. The church issued it’s apology for involvement in Residential Schools on June 9, 1994. Here is the full text of their apology.

The Catholic Church of Canada also operated many residential schools throughout Canada. The church issued it’s apology for involvement in Residential Schools on March 13-15, 1991. Here are some details on their acknowledged apologies.

The video below is an apology from Canada’s Prime Minister Stephen Harper in a speech from parliament. In it, he apologizes on behalf of Canadians for Indian Residential Schools and the damage that they have caused first nations people.

The video below is an apology from Canada’s NDP Leader Jack Layton in a speech from parliament. His speech as an oppostion member is largely in support of the apology to first nations.

Here are some quotes from parliament by the Prime Minister:

“Mr. Speaker, I stand before you today to offer an apology to former students of Indian residential schools,”

“The treatment of children in Indian residential schools is a sad chapter in our history.”

“Today, we recognize that this policy of assimilation was wrong, has caused great harm, and has no place in our country,”

“The government now recognizes that the consequences of the Indian residential schools policy were profoundly negative and that this policy has had a lasting and damaging impact on aboriginal culture, heritage and language,”

“While some former students have spoken positively about their experiences at residential schools, these stories are far overshadowed by tragic accounts of the emotional, physical and sexual abuse and neglect of helpless children, and their separation from powerless families and communities.”

(b) Provide a holistic, culturally appropriate and safe setting for former students, their families and communities as they come forward to the Commission;

(c) Witness, support, promote and facilitate truth and reconciliation events at both the national and community levels;

(d) Promote awareness and public education of Canadians about the IRS system and its impacts;

(e) Identify sources and create as complete an historical record as possible of the IRS system and legacy. The record shall be preserved and made accessible to the public for future study and use;

(f) Produce and submit to the Parties of the Agreement a report including recommendations to the Government of Canada concerning the IRS system and experience including: the history, purpose, operation and supervision of the IRS system, the effect and consequences of IRS (including systemic harms, intergenerational consequences and the impact on human dignity) and the ongoing legacy of the residential schools;

(g) Support commemoration of former Indian Residential School students and their families in accordance with the Commemoration Policy Directive (Schedule “X” of the Agreement).