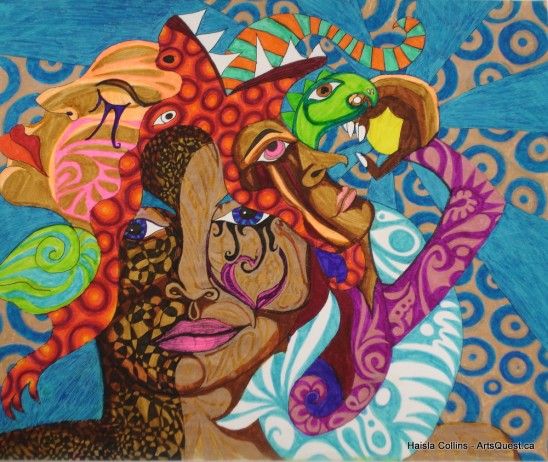 Through the Eye of the Raven

In these two sections, only Lionel’s pages are referenced by Jane Flick. However, in both parts, I found additional connections and interconnections between the characters that are not in Flick. In this blog post, I focus not on Flick’s notes, but instead on the additional observations that I have made. that uncover king’s de-colonization and his implied message about colonization.

Lionel goes to Wounded Knee, where there is an on-going occupation by Native Americans protesting their poor living conditions and treatment (Flick 148-9). Lionel’s purpose,  in going to Wounded Knee, was to read his boss’ paper, but instead of accomplishing this, he inadvertently gets drawn into the protest. Some observations I had about this section:

Lionel’s name, “Lionel Red Dog”, (King 64) also points to King’s use of reversals, or backwardness throughout the novel. The reference to Dog reminds us of “[t]hat Dog Dream [that] has everything backward” from the beginning of the book (King 2).

Commentary on the Residential School System:
Lionel “stood there, feeling vulnerable” (King 60). I believe this is a reference to the vulnerability of children who were placed in Residential Schools (“Reclaiming“).  Betraying Lionel as vulnerable, King once again uses reversal as a method of making his point. He shows Lionel standing with the protesting Indians, feeling uncomfortable and vulnerable. He is “shifting from one leg to the other, putting his hands behind his back, putting his hands in front of him, pushing his lips out, sucking his lips in” (King 60). Lionel, a First Nations person, is feeling uncomfortable and detached in this situation. When he first arrived, he had no reaction to the fact that the people there were protesting against the poor treatment of Native American Peoples. It did not occur to him, that the issues of the protesters, were also his own issues. Through Lionel’s reactions, King shows just how effective the Residential School systems was in destroying Native People’s connection to their culture.

King further drives home his point, that Native People’s connections to their roots have been severed, through his reference to the confiscation of numerous Reservations: Lionel tries to make an excuse so he can leave when he said, “I’ve got a reservation.” To which the protester “took Lionel by the shoulders, looked at him hard, and said, “Some of us don’t” (King 61). These few words emphasize not only actual theft of Native lands, but also the theft of Native communities through the deliberate destruction of families and bands. Aboriginal peoples believe that all life is interconnected. “First Nations relationships fully embrace the notion that people and their families are strongly connected to the communities they live in, their ancestors and future descendants, the land they live on, and all of the plant, animal and other creatures that live upon it” (“Interconnectedness”).  However, with colonization, Native beliefs were outlawed and children were forcibly torn away from their parents and placed in residential schools. This process caused generations of Aboriginal children to be separated from their communities and from their beliefs. Moving Aboriginal peoples into residential schools ripped away their source of spirit and because they no longer felt a connection to their people, land, or ancestors, many were left feeling isolated and bereft.

King’s use of cartoon character to portray official “government-type” individuals.
I believe King uses cartoon character names for the official “government-type” characters, first to portray how credible, yet ridiculous the situation is that Lionel finds himself. In addition to this, I believe it is a statement about the historical relationship between the government and Native Peoples. “Tom and Gerry” are the two Hotel security men who escort Lionel to the police (King 67). “Tom the cat and Jerry the mouse, are the stars of a Long-Running series of short theatrical cartoons produced by MGM” (“YMMV”). The use of the names, Tom and Gerry, reinforces the position that the Invading Europeans, erroneously felt they did nothing wrong in their actions towards the Native Peoples. This is shown through the trope: “Tom never ever did anything wrong! Tom was only following his instincts, how dare Jerry object to being eaten!” (“YMMV”).

Tom and Gerry hand Lionel over to two police officers, “Chip” and Dale” (King 68). “Chip ‘n Dale Rescue Rangers was one of several Animated Series on the syndicated “Disney Afternoon” block of the late 1980s into the 1990s”. The Rescue Rangers started “after a police dog they befriended is put behind bars for a crime he didn’t commit” (“Chip”).  The first point I want to make is, Chip and Dale are goofy characters and they are Rangers. In this way Chip and Dale are a metonomy for police as stupid and unintelligent. As a result, King is using them to send a message about the police. Secondly, Lionel’s situation is a reflection of Chip and Dale’s friend, who was put in jail for a crime he didn’t commit.

Commentary on Stereotypes:
King engages in yet another reversal, when Lionel spends a month in prison, for a crime he didn’t commit, and returns to “Blossom, an unemployed ex-con” (King 68).  Lionel moves from being detached from his cultural situation, to being placed in the centre of the negative reality of his culture, resulting in part, from the Residential School System.  Lionel becoming unemployed speaks directly to stereotypes attributed to Native Peoples.  “Over the course of history, since Christopher Columbus ‘discovered’ North America, First Nations have been depicted as blood thirsty savages (the earliest stereotype), drunken, poor, wooden, lazy, and “casino rich” (the latest stereotype), to name a few (Joseph).  Lionel is tagged as an Indian Activist, loses his position, but finds a new job.  However, three weeks later, “the police arrived to question him about a rally that the American Indian Movement had planned for the following weekend” (King 69).  Lionel knows nothing about it, but just the suspicion that he might causes him to become “unemployed again” (King 69). Stereotypes are an important issue, because “[f]or First Nations, it diminishes self-esteem and cultural pride, and for non-First Nations it dehumanizes and enhances negative perceptions of First Nations people and their culture” (Joseph). The last few pages of Lionel’s section that I analyzed tie directly back to the residential school system, and reflect the “response to RCAP’s five-volume report that revealed an overwhelming link between the social crisis in Aboriginal communities and the Residential School System” (“Reclaiming”).  Lionel’s situation goes beyond stereotypes, and speaks to a failed system.  A system that has resulted from long-term historic trauma resulting from the residential school experience.

Eli is driving Lionel to the Sun Dance when he recalls the death of his wife, Karen. There is a lot going on within these few pages, but I am going to focus on these main points: The role that death plays in Native Culture, the Sun Dance, and the notion of home. These are my observations:

Death in Native Culture:
“The Blackfoot believe spirits to be an active and vital part of everyday life. Therefore, they viewed illness as the visible presence of an evil spirit in a person’s body. Consequently, such illness required the expertise of a professional medicine man or woman who had acquired, through a vision, the ability to heal the sick by removing evil spirits” (Hanes). Taking this belief into consideration puts a different view on both Karen’s sickness and her recovery. It raises the question of what evil spirit caused her illness, and what caused the evil spirit to leave.  Add into this mixture the fact that she still dies, because she is hit by a car as they prepare to return to the Sun Dance after being absent for “over twenty years” (King 381). This raises the question, of what evil spirit brought forth her death.  I believe King is making a statement about the Sun Dance and evil spirits.

Sun Dance:
“Once the Sun Dance lodge was erected around the central cottonwood pole, the dance began and lasted four days. During this time, the dancers, who had taken their own sacred vows, fasted from both food and water. They called to the sun, through sacred songs and chants, to grant them power, luck, or success” (Hanes). In addition, the European Invaders tried to ban the Sun Dance. I think it is interesting to note that Eli never wanted to go to the Sun Dance, and when he finally decided to return, because Karen requested it, and she had just defeated death, he reluctantly agreed to go. However, Karen’s life was taken from her before he (or they) could return.

Notion of Home:
Karen asks Eli if he is afraid of going home, and he answers, “I am home” (King 382).  Throughout the novel Eli has separated himself from his cultural ties, and has turned his back on his family and people. In many ways this signifies the isolation created within Native communities resulting from the Residential School System (“Reclaiming”).  Eli was conflicted on who he was, and as his sister Norma tells Lionel, “Your uncle wanted to be a white man” (King 36).  He married a white woman, he turned his back on his home and culture, but in the end he returns.  The death of Karen – his place of home, caused him to return to his roots. To return to the home he grew up, a home that he decides to save from the dam.

“Reclaiming History: The Residential School System in Canada.” Where are the Children. WhereAreTheChildren.ca. n.d. Web. 26 July 2016.