“If Europeans were not from the land of the dead, or the sky, alternative explanations which were consistent with indigenous cosmologies quickly developed” (“First Contact” 43). Robinson gives us one of those alternative explanations in his stories about how Coyote’s twin brother stole the “written document” and when he denied stealing the paper, he was “banished to a distant land across a large body of water” (9). We are going to return to this story, but for now – what is your first response to this story? In context with our course theme of investigating intersections where story and literature meet, what do you make of this stolen piece of paper? This is an open-ended question and you should feel free to explore your first thoughts. 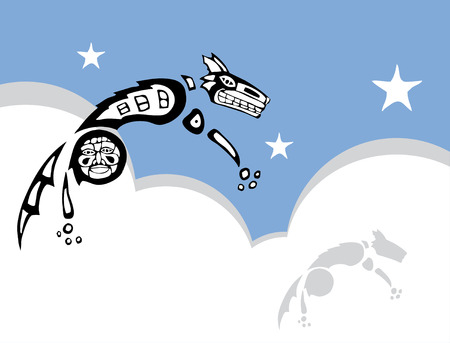 Robinson’s twins story is a key that can help unlock the door of understanding. When I first read Wendy Wickwire’s account of Harry Robinson’s story about first contact, I had several thoughts (Robinson 9 – 10).

First I could see the blending of two ways of thinking. This is an oral story about a written document, and as a result gives both oral and written literature equal weight. This story in effect creates an intersection between two different ways of being.

Next, I thought the story totally makes sense, because Europeans and their decedents, used the law to cheat the Native Peoples out of their land, and out of the agreements that were made with them This was done using written reports and written documents. According to the governments of Canada and the U.S., these written documents held more weight, and validated the decisions made by the conquering Europeans as well as the subsequent actions of the governments that followed. I found an interesting conference report from the Shuswap Nation Tribal Council that explores the effect of how the colonial doctrine of discovery is used to substantiate the continued subjugation of Indigenous sovereignties around the world. This report uses Harry Robertson’s story, and repeats the tale about the twins showing how the North American lands were assigned (Doctrine 16). In this report, Dr. Ignace states, “The Secwepemc word for paper, before paper, also meant rights and laws” (Doctrine 21).   (The Secwepemc People are a Nation of 17 bands, and they occupy the Shuswup area in British Columbia. Click here for more information about the Secwepemc People (“Our Story”).) This conference report echoes my first impressions about this story that colonial power puts into law the rules that gave the colonizers “a tool to strip them [Native Peoples] of their rights” (Doctrine 3).

Next, I wondered how this story fit in with other contact stories. One story I found was the oral story from Haida Gwaii of Raven and the first men; click here to see a video of the telling of this story (Gibb). In this story Raven encounters supernatural beings. However, when the first men appear, there is no mention of anyone other than the Haida. This fits right into what Lutz said in his article: “When we look at a large number of these accounts, [contact stories] we see a wide variety of stories, not surprising given the amazing diversity of indigenous cultures on the west coast. But … [e]uropeans are shown as associated with the spirit world” (“First” 36).  Robinson’s story is similar in many ways to the Haida version, yet it is also different. Robinson’s version delves into the spiritual, because it explains the beginnings of both First Nations as well as Europeans. His story connects each group to the other, and shows where each culture places value. “Indian’s power was located in their hearts and heads; for whites, it was located on paper” (Robinson 16).  This statement fits in with European traditions of literature, because what is written is given value. This follows into how Western society functions, because value is given to the printed words and written laws.

Finally, I wondered if I was even entitled to hear this story. While I was reading Harry Robinson’s story about first contact (Robinson 9-10), I thought about David Peat’s book, Blackfoot Physics. In Peat’s book, I recalled reading: “[s]ome Elders teach that the [origin] stories are sacred and must never be passed on to outsiders” (Peat 87). I also found this quote from First nations Pedagogy Online, “[s]tories can vary from the sacred to the historical”, and “[s]ome are ‘owned’ by certain clans or families and can only be told by a member of that group” (“Storytelling”).  As a result, I felt almost guilty reading Robinson’s story. However, Robinson wanted his stories to be passed on, and had created “English versions of his stories to audio tape so that they could carry on without him” (Robinson 29 -30). Robinson knew, as Peat wrote in his book that the Elders had acknowledged, “the time has come to speak openly and share their knowledge” (Peat 87).  Robinson wanted Wickwire’s assistance in transmuting his oral stories into written form, and “was very pleased with the book” once the first book was completed (Robinson 21). Living by stories was important to Robinson, and he knew with his death, his stories would die too, unless they were reproduced in written English. Like the story of the twins that melds together European and First Nations culture, Robinson’s stories in print form, also melds together these two cultures.

I felt that Robinson’s story about the twins is important, because it speaks directly to the history of contact between Europeans and Native Americans. The story helps explain the period of conquest and exploitation. Robinson’s story turns the table on the European beliefs and their propaganda, and shows the truth of what actually occurred. The many native peoples of North America have been told (by the Europeans invaders) that they have no real history, because it has not been recorded anywhere, therefore, it does not exist. Instead the Europeans maintained that the natives were savages, because they did not have a written history, and as such are not a distinct people; therefore, they have no rights under the law. The Europeans maintained, that these oral stories, which were told by the Elders, were from memory, and were simply myth and fantasy. Robinson’s story turns this around, and instead validates the Native position, and invalidates the conquerors. The use of twins, sets up the potential for the use of dichotomies, including two different ways of life.

Robinson, Harry. Living by Stories: a Journey of Landscape and Memory. Compiled and edited by Wendy Wickwire. Vancouver: Talon Books2005. (1-30)

10 thoughts on “The Underlying Meaning Behind the Stolen Document”