My current research is on lodgepole pine, but I originally considered working on whitebark pine. Whitebark pine is an iconic species of sub-alpine ecosystems in western North American mountains. It can survive a millennium in harsh, cold environments, but climate change, pests, and disease are now threatening it with extinction. 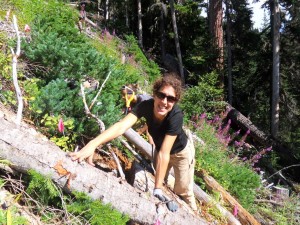 Sierra McLane planting whitebark in an experimental plot. Photo by Sally Aitken and used with permission of Sierra McLane.

I came across this paper by Raffa, Powell, and Townsend that made me think whitebark pine just can’t seem to catch a break! Between disease, fire suppression, climate, and now beetles, it’s in real trouble.  It turns out the trees have no natural resistance beetles to speak of. They do seem to do better in mixed stands, but that’s only because the beetles seem to like lodgepole better.

However, there’s still hope for whitebark pine. One of the things that could change its prospects would be assisted migration. A changing climate doesn’t just render current range unsuitable; it transforms locations outside the current range into potential habitat. Aitken lab alum Sierra McLane tested whether this might be possible a few years ago. She planted whitebark pine seeds in experimental plots north of the current range and found that whitebark was able to establish north of its current range. No one has decided to move whitebark pine, but Sierra’s work gives us insight into how to do it if we ever do make that decision.

There’s a paper coming out soon in Environmental Applications discussing the ethics of moving whitebark pine. They conclude:

We are not arguing here for anything as strong as a duty to relocate the whitebark pine. However, we do consider that there are good reasons to do so, and few very strong ethical objections. Our claim is that if rust-resistant strains of whitebark pine can be clearly identified, depending on the outcome of economic and feasibility studies, and consultation at particular sites, there are likely to be places where relocation of whitebark pine is ethically desirable.