The Alma Mater Society of UBC Vancouver (AMS), UBC’s student union, has discovered voting irregularities in its January 2010 elections and referenda. The AMS is taking this issue very seriously and is taking the necessary measures to deal with this matter. An independent auditor has been hired to conduct a thorough investigation. The AMS will be unable to release any further information until the investigation is complete. The AMS’ primary concern is in serving students. As such, the organization will operate business as usual.

Council tonight will address this issue, and presumably key parties will learn what, exactly, the fuck is up.  Meantime, however, you and I and everyone else not privy to this info (which is, it seems a good 90% of hacks) are left wondering what exactly a voting irregularity is.  Because, to me, it sounds like this: 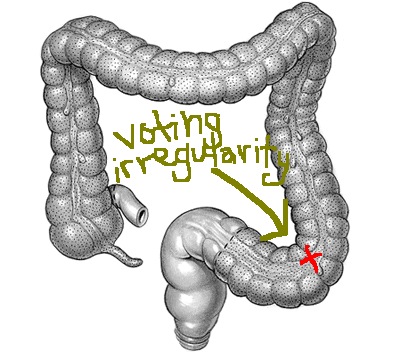 (See, because the elections were supposed to have been passed, but apparently something wrong went into the system? and now things are all backed up? and we have to seek independent help for this blockag—oh, fuck it.)