WIth only a few hours left in the EUS elections, we’re hoping you’ve all already put in the time and research to make informed democratic choices. But if you didn’t, check out this obviously timely and well-prepared post: What’s up, Ian Campbell. We knew Ian was running unopposed for VP Finance, because apparently most people—even those paid to do it—just kind of don’t like Finance positions: And it takes a classy dude to admit Hey, I’m running in an uncontested race and then turn around and say, but it’s still my job to convince you that I’m the right person for the job.

But the real reason we <3 and are endorsing Ian:

1. He’s knowledgeable about AMS affairs, and we like his views on those;
2. He recognized us on a bus and we talked about the above for like half an hour (drunk time).
Yeah, we’re suckers for that sort of shit.

THE KIND OF JUST CONFUSING

Jannel Robertson is one of many running for AMS Rep. Unfortunately, her platform left us scratching our heads a little. (So did her legwarmers and Eminem pose.) In amongst your boilerplate campus left material (tuition is too damn high, Gage South/Land Use—o hai not yr department) is this:

“During my term, in order to prevent sexual assault or violence from occurring, I will work with Business and Facilities Committee and Student Life Committee to implement an official training program and workshops for all Pit Pub, Gallery and security staff. This way staff can recognize a potential situation before it develops and hopefully be able to prevent the event from occurring. They will know how to deal with disclosure and where to direct the individual to for support. Proper training of staff can raise awareness and help prevent future sexual assaults or violence from happening.”

Normally we would analyze this and talk about strong and weak points in Jannel’s argument, because it’s not commonplace in elections—and especially not in (stereotypically) male-dominated EUS elections—and therefore a worthy topic of analysis. But in the interests of Lady Feminism As Interpreted by Women I’ve Never Met, that would be wrong. So you know what? BLINDLY VOTE FOR JANNEL. She seems like a good person with a lot of unrelated volunteer experience, and her ideas could be worse. Also, she said ‘women’ and ‘sexual assault,’ so as a feminist, I’m legally obligated to find these good ideas for Council to address.

p.s. I’M SORRY WE CALLED YOU EMINEM, WE KNOW HE’S MISOGYNISTIC AND HOMOPHOBIC AND GLORIFIES DOMESTIC VIOLENCE AGAINST WOMEN

See, a bureaucracy like the AMS will never have the efficiency that a smaller bureaucracy like a student society will ever have; therefore, THE AMS SHOULD JUST GIVE THE EUS THE MONEY FOR WELCOME BACK BBQ/BLOCK PARTY.

“For example for frosh week, instead of AMS hosting a concert they should instead give us the grassy knoll and funds so WE can host a giant kick ass party for the entire campus.” 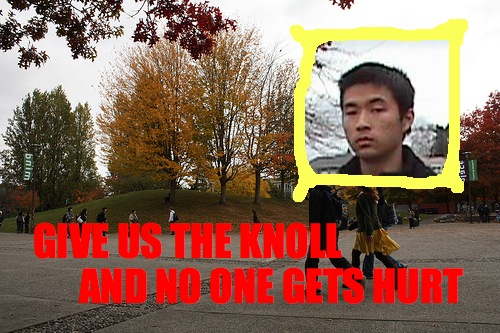 Loooooooook, the AMS refused to underwrite more years of ACF because it was a bad idea. If the Engineers want to take a crack at this, that’s great—but in light of IMMINENT FINANCIAL MELTDOWN, I’m thinking hey, maybe this one waits a year. WHAT THE HELL, BROSEPH

“Provide a wide range of opportunity for student involvement in all aspects of the External Portfolio, allowing UBC engineers to experience more than just the academics of university life”
I’ve been to petting zoos with less fluff than that statement. There are entire factories devoted to the creation of pillows and other find bedding which have less fluff.

We know you’ve got ideas, Ben Kernan, even if you don’t have a website. But this is ridiculous. And since you’re running in one of the most contested races, you may wish to step your game up. 5 thoughts on “The EUS Is Weird”