A number of students in my course on Latin American politics (Poli 332) last fall were actively involved in the movement to support José Figueroa. One put together this terrific blog on the issue. Another idea the students generated was a “We are José” campaign on the Internet. The movement continues to build momentum, and on January 16 there will be activities in support of José nation-wide. The story has been picked up by CTV news. What follows is an update from the campaign. 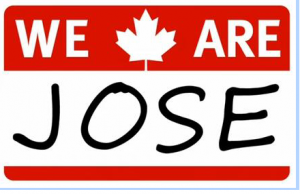 People from all walks of life and community-based organizations are joining forces to reverse the deportation order against José Figueroa and his family and are making a call to all to join the WE ARE JOSE campaign. Several initiatives are being organized for the WE ARE JOSE Campaign held across several Canadians cities on January 16th, 2011. Visit www.wearejose.com for more information.

WE ARE JOSE supporters believe that the Canadian government’s decision to deport José is a mistake and that this error impacts not only Jose and his family but also puts many Canadians of Salvadorean origin at risk of deportation. The campaign requests that the Canadian government, in particular the Minister of Public Safety, Vic Toews, respond to the demand to grant José an exemption by January 16th declaring him no threat to national security, in honour of the Salvadorean Peace Agreement and as a reminder to Canadians that our country played a key role in putting an end to El Salvador’s bloody 12-year civil war.

Join WE ARE JOSE National Day of support, January 16th

In Toronto, ON: TBA

1. Offer your endorsement to the WE ARE JOSE campaign, either as a person or organization or both. Send us an email at wearejose@gmail.com. Don’t forget to FWD this email to all potential supporters.

2. Print and display the WE ARE JOSE logo in a visible place such as your Facebook profile, door step, back of your car, desk top at work, etc… Visit www.wearejose.com to download it.

3. Watch and Fwd to all your friends the WE ARE JOSE video: https://www.youtube.com/watch?v=4fxMAYgQjN8

4. Record your video response to the WE ARE JOSE youtube video. You can say who you are and where you are from and why you support WE ARE JOSE. See http://wearejose.wordpress.com/tellyourstory/ for instructions.

5. Send an email to the Minister of Public Safety, the Honourable Vic Toews, at Toews.V@parl.gc.ca, requesting the reverse of the deportation order. Get a sample letter at http://wearejose.wordpress.com/tellyourstory/ .

6. Organize an event of solidarity for Jose and let us know when and where it will be. Recommended events are vigils of support and commemorating the peace agreement. Can include showings of the recently released documentary about José’s case http://harpalarp.blogspot.com/2010/12/sfu-students-explain-jose-figueroas.html and host a discussion.

READ more about José’s case at the following blogs and below: