The artists re-interpret the cosmological stories and oral histories from their own cultural heritages — Greek, Chinese, African, and the Indigenous’ Haudenosaunee culture, and explore the meeting of cultures in their collaborative process with community members, where unique stars signifying individuals’ heritage were made. Each story is connected to a season, and characters from the heavenly world travel through time and space as the night unfolds, highlighting diverse cultural beliefs. 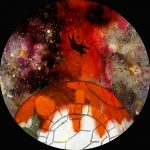 For thousands of years, the Haudenosaunee Nation has told the story of Shahutolátha’ né·n Ohkwalikó· Hunting the Great Bear, which involves the ‘Big Dipper’ constellation. This story describes why the leaves turn red and yellow in autumn and indicates that this time of year when the men should begin hunting. In this story, a Great Bear kills many animals and steals food from the fields, making everyone scared. Amberley reinterprets this bear as a mechanical monstrosity, reflecting destructive actions and industry taking place in our present day. In the story, Three Brothers share a dream in the smoke of their fire and learn that they are the ones who will kill the Great Bear. They hunt him, and becoming afraid, the Great Bear leaps into the sky, where he is chased among the stars and around Turtle Island. He is finally defeated, and his blood and fat falls back to Earth, where it stains the leaves. 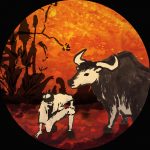 The love story of the Cowherd and Weaver Woman has been told all over East Asia, as centerpiece of the Chinese Qixi festival, Japanese Tanbata Festival, and the Korean Chilseok Festival. In the night sky, the Weaver Woman is represented by the Vega star, and the Cowherd by the Altair star. As young gods of the Heavens, the Weaver Woman and Cowherd Man fell in love, but this love was prohibited and they were separated; the Cowherd man was cast down to earth to live as a human man. Many years later, the Weaver Woman stole away from the Heavens down to Earth, where she and the Cowherd accidently meet and fall in love all over again. After further hardship where they are separated once more by the creation of the Celestial River (the Milky Way) they are shown pity and allowed to meet once a year. On the 7th day of the 7th lunar month, a flock of magpies forms a bridge to reunite the lovers over the Celestial River. 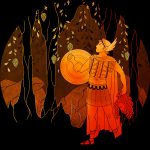 The Greek stories highlight the mythology of human desires and emotions through Heroes and Gods. We journey through the constellations of the sea monster Cetus, the princess Andromeda, the magical winged horse Pegasus, and legendary slayer of monsters Perseus. Offended by claims made by Andromeda’s mother Cassiopeia, Poseidon God of the Sea punished her family, demanding that Andromeda be sacrificed to the sea monster Cetus. Andromeda was chained to a rock in the middle of the ocean and just before the sea monster gobbled her up, the renowned hero Perseus slayed Cetus and unchained Andromeda. As well as Andromeda’s story, we present an Orpheus story, that of adventure, music, and a narrow escape on the high seas. After receiving the Lyre from the eagle Aquila, Orpheus joins the Argonauts on the seas and when the crew encounters the Sirens, he is able to save the day with his beautiful music. 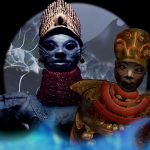 The African story ‘Why the Sun, the Moon, and the Stars live in the Sky?’ is an exciting journey about Owen the Sun and his wife Uki the Moon, who are forced to flee into the sky to escape their drowning by the Sea King Okun on earth. After a fateful visit with the Sea King, Owen sets on a quest to build a palace large enough to accommodate the entirety of the Sea King Okun’s vast oceanic kingdom and retinue. As the sea levels begin to rise, and Owen the Sun and Uki the Moon are forced to climb atop their newly built palace and flee into the sky, and Uki swears that she will never leave. The dynamic story brings to life the fascinating history of West Africa’s finest instruments, such as the Talking Drums, Djembe, and Shekere, which are expressed by the many dancing stars’ vibrant attire. The shining daylight and glimmering moonlight are a reminder of this story, as the Sun and Moon continue to live with the clouds and their cousins the stars in the sky.