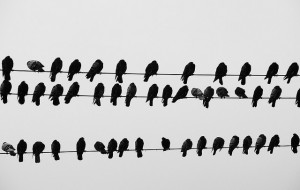 A few days ago Fiona wrote two posts about Twitter, tweets, and Twitter essays: in the first, she discusses Jeet Heer, who numbers tweets to structure them together into an essay; in the second, she talks about how a person ought to read tweets. In particular, Steven Salaita had an offer for a tenure position withdrawn over a tweet which seemed, on its own, to be incendiary:

Salaita claims that, in the context of his overall Twitter career, this tweet isn’t as bad as it looks; it means something different when it is part of a whole. Fiona therefore asks the following question:

How far forward or back in someone’s tweet corpus must we look to be satisfied we have enough context? What are our responsibilities as readers? What are the boundaries of a twitter storm? What is the flock that holds our unmarked sheep?

I want to approach this question—approach, not answer—but first we need to get into some literary theory.

My position regarding the issue of meaning and text is this: a text has a set of meanings inherent in itself, determined by the semantic structure of the text in relation to a wider context of meaning. So, a text can only mean something because a language outside of that text provides a system of correspondences between signs and concepts. However, it’s more than just language that creates those correspondences; context does this, too. (A simple example: the phrase Yes, thanks only means something in relation to other sentences. See also deixis, anaphora, and exophora.) In other words, nothing is a unit of meaning on its own. Whether in a Twitter essay or not, a tweet can only mean something in relation to other tweets—or texts, at least.

Because the context and language are perpetually changing, the meaning of a text is perpetually unstable (Derrida and deconstruction), and that’s a concern, but rather than treat it separately I think I want to clump it together with the fact that, in any text, there is always going to be ambiguity. Words have multiple meanings, and when strung together that ambiguity grows. So it probably makes sense to say a text has a set of possible meanings, some better than others, but none is authoritative. No matter what, the text will mean more than the author desires it to mean; the author’s task is to limit the overflow.

Neither the author’s intentions nor the reader’s interpretation are where we find meaning. Of course a reader is needed to uncover the meaning, and of course an author is needed to create it, but the text means on its own. (A simple example: if someone misspeaks, their intention obviously and by definition differs from the meaning of what they said. If a person misreads clear instructions, their interpretation differs from the meaning of what they read. See the intentional fallacy, for instance.) Thus we have a relationship that looks like this:1

So, when you are composing a text (a tweet, for example), the goal is to get the text to match or represent your intention as closely as possible. Because there’s a gap between your intention and the text’s meanings, there are two things you’re responsible for: your intention and the text’s own meaning. And because there’s a gap between the text’s meaning and the reader’s interpretation, you’re going to have to be careful not to make that gap worse than it will already be. If you don’t number your tweets and signal what context you’re writing in, that gap is likely to get bigger.

(Of course, not all authors strive for clarity. In poetry and fiction, there are certain advantages to making a reader work for the meaning. Perhaps there are some in non-fiction, too. As an example, a friend of mine does some work in Asian Canadian literature, and she notes that the work of Fred Wah is deliberately alienating as a reflection of the alienation of Asian Canadians in Canada.2 It’s a risk an author might be justified in taking, but they are still responsible for that risk.)

So what I would say to Fiona regarding Salaita is that readers are responsible for trying to find out as much context as reasonable; specifically, the more you intend to act on your interpretation (lay blame, etc.), the more context you are required to consider. But Salaita is also responsible for his tweet’s meaning, and it seems there was a sizable gap between what he intended and what he said: he’s responsible for that gap. He should have numbered his tweets.

I think there are three interesting questions that come out of this.

(Something I didn’t get into, but which I think does play a role here, is the author function. In what ways is the author, or the author’s reputation, a feature of the text? Feel free to look into it.)

1. Actually, in non-fiction, the relationship looks more like the following, but I’ve simplified it above:

I should note that I’m leaning pretty heavily here on other versions of this conversation I’ve had elsewhere; even using Paper Towns as an example is taken from this conversations. All of the writing is original, here, but the argument is not. I’m also sure some readers will take issue with this literary theory. Of course I don’t mean to suggest that neither the reader’s experience of the text nor the author’s intention are relevant; I merely note that the meaning of the text is not dependent on either. I’ll happily field any questions in the comments: this problem is one that’s been debated for decades and certainly there are no pat answers.