On the 10th of October, Cambridge University Library (the UL) launched an online ‘Crime and Punishment at 150’ exhibition, accompanied by a smaller physical version in the Library’s entrance hall. The captions for the exhibition were written by a mixed group of arts and sciences UBC students as part of their work for Dr Bowers’ 2015/16 Dostoevsky in Translation paper. Further input came from Mel Bach (the UL’s Slavonic specialist and overall curator of the exhibition), Dr Bowers, and two research associates (Kristina McGuirk at UBC and Barnabas Kirk at Toronto). 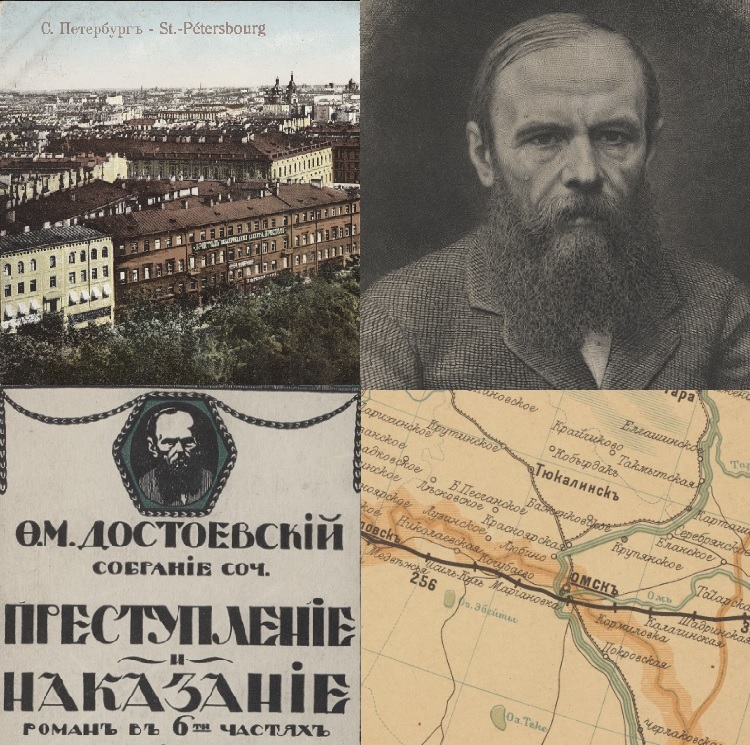 Viewing images shared online, the students each chose an object from a list of 22 selected by Mel and started to explore their chosen exhibit with some pointers given to help them tie the exhibit both to the novel and to the context of the UL’s collections. The students rose to the challenge with enthusiasm, each working out how best to research their exhibit thousands of miles away from the physical object itself. Early drafts were commented on within the peer group, and final drafts marked and edited by Dr Bowers in consultation with Mel.

It was important that the chosen exhibits capitalised on some of the particular strengths of the UL’s 8-million-volume-strong collections. Victorian penny dreadfuls housed in the Library’s famous tower, for example, provided two striking examples of wild tales of Russia produced for British readers, the Maps Department produced a huge folded railway map of Russian Asia (an enormous 1.8 metres wide) and a charming atlas of the Empire, and the Catherine Cooke collection of postcards provided several items including a light-hearted photo montage of two criminals being apprehended.

In total, the 22 exhibits explore Crime and Punishment in development, Russian original, translation, and scholarship, the novel’s influence in Russia and the UK (and UK influence on Dostoevsky), and the locations of the novel, St Petersburg and Siberia, and their role in the novelist’s own life.  The exhibition ends with an image of Lazarus being raised by the dead – a story which appears in the epilogue of the novel as Raskol’nikov progresses on his journey towards emotional and spiritual salvation.

The physical exhibition shows 9 of the 22 exhibits, and will run until November the 5th.