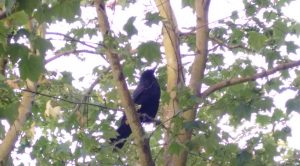 How Evil Came to the World

The first human families were happy and peaceful.  They were that way because by working together there are food and shelter for everyone.  Over the years they became a big family tied together by sharing food and shelter and telling stories.  More importantly, they are happy because there is Hope.  Hope is the belief of inherent goodness in the world; and as long as their children believed in Hope, everyone was happy.  There was another family: two crows facing eviction from the area by the owls.  The humans took pity on them, and fed them peanuts.  The crows nested near the humans, and everyone was happy.  The crow family grew, and the human children marveled at the feathery creatures with pink mouths.  The crows gifted shiny things they found to the humans.  They became fast friends.

A disease hit – the father crow died, the mother lost most of her feathers.  The owls seized the opportunity and chased all but one of the crow children away.  The remaining crow child quickly learned to fly and hunt, and started to feed his mother.  The humans were touched by his acts.  The crows showed them Hope.

The owls were consistent, and one day the crow came home to see her mother on the ground.  The fall from the nest killed her.  The crow stayed for almost ten days by the body, and then flew away.  The human children were devastated.  They told the story to each other, and some refused to believe the crow was gone.  He will be back, they insisted.  I wished he did too, but he didn’t.  As the human children grew up, they lost Hope, and Evil came into their world.  They can’t call the crow or the tragic story back.

It was too late.  For once a story is told, it cannot be called back.  Once told, it is loose in the world.  So is Evil.

Story telling is empowering and intimidating at the same time.

It empowers because I am sketching out a little piece of the world to the audience; who are in captivity.  Orality makes me hyper-aware of voice, tone, and non-verbal communication.  There are no punctuation (!), bolding, or proofreading.  Just me telling the story the best I know how.

And oh the intimidation!  It comes from the stress of trying to tell the story “right” and interaction with the audience.  Comments and questions from the audience had me thinking about the story and story telling in general.

“Why would the crow leave?  What’s out there for him?”

“Why wouldn’t the crow leave?  His family is wiped out.”

“It will be darker if the crow had to push his mother out of the nest, because he couldn’t gather enough food for two.”

The very last remark left me in awe.  It humbled me.  That is one nature of story telling?  Once it is out there, it has its own life.  It is under no one’s control; not even that of the author.