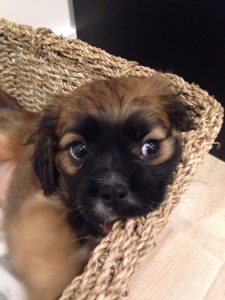 Me and my family have always had dogs. When I was a newborn my parents were living in a van in Whistler, parking in the ski lots at night, working at restaurants full-time, and looking after me and their two German shepherds — Bandit, and her daughter, Ziggy. When I was about four we moved from the farmhouse they had moved into and shared with a few friends in Pemberton to Braylorne, a small mining town past Lillouet. There we lived in a trailer, and me and my sister — she was two to my four — shared the shower for a bedroom. Hard to picture, I know — I think my Dad stuck a few two-by-fours in the middle of the shower; my bed was on the top, hers on the bottom. I faintly remember using the drawer handles on either side of the shower to clamber into bed. We still had one of the dogs then, Ziggy — Bandit had passed away after a terrible accident with a bear-trap.

We lived in the trailer for a while, then moved into the house my Dad and his friends had been building in the mean time. Ziggy had puppies, and we sold all but Bo — a half German shepherd, half husky black puppy with thick fur and big feet. I don’t remember much of him as a puppy, except that once he *ahem* eliminated on a wasp nest, and my Dad had to beat his hindquarters with a fly swatter to get the wasps to stop stinging.

We moved to Salt Spring Island when I was about five, and only took Bo with us — Ziggy had been run over a few months before, and we buried her outside our house in Braylorne. Bo took to Salt Spring Island like a fish to water — and got in trouble a couple times with running away to chase the sheep in neighbouring farm fields. I remember him then — lanky, big and furry. He had a penchant for grapes and apple cores, and once hopped in the back of a stranger’s car because he wanted to go for a ride. I’m sure he caused my parents a few headaches, especially in the hot summer months when his thick black fur would cause him to pant like the blazes — but he hated to swim, so he could never truly cool down.

When I was eight we moved to Whistler. I remember my Dad went ahead of us, and my Mom drove us in the Jeep. Bo sat in the front seat, stinking up the car with his breath. We moved to a house in Alpine Meadows that had strange cut-out shapes in the balcony. Once Bo got his head stuck in them; other times he’d sleep on his back on the porch with all four paws in the air. He was good at scaring away bears — his sheep-chasing finally came in handy there! But he came back when called; bears, after all, are a bit feistier than sheep.

When I was thirteen we moved to Emerald Estates, a different residential area in Whistler. Bo followed me to the bus one day, and I told him repeatedly to go home — which he would, until I had my back turned, then he would follow me again, keeping a sneaky distance away. He liked to sleep at the foot of the stairs, and would shed each spring and autumn huge, fluffy clumps of hair that would float on the breeze and collect under the car tires.

When Bo was about fourteen we got a new puppy, Eddie. Eddie was a rescue from Whistler Animal Galore, or W.A.G., with huge feet, floppy ears, and a tendency to fall over when he tried to run. Bo hated him — I would tear myself out of bed at the break of dawn (or as my parents called it, 10 AM) and yell at someone, anyone, to stop the dogs from barking at one another.

But eventually they got along, grudgingly. Bo became slower as Eddie got faster, and soon enough Bo just lay and watched Eddie lunge and bark at him, too tired (or wise) to retaliate.

We had to put Bo down in March, 2013, after a long, wonderful life of being our big dog who slept on his back with his feet in the air. Eddie missed him, and still sleeps at the foot of the stairs where Bo used to sleep.

I’m now living in Vancouver, having moved out to go to school and figure out what to do with my life. I’ve recently gotten a dog of my own — Finn, a fluffy Shih Tzu/King Charles spaniel cross, who at eight weeks old is 0 to 60 in half a second, and the same backwards — a  nippy little crocodile who likes to chew toes and sleep with his nose tight up against my neck.

He hasn’t met Eddie yet, but he will.

Home, for me, has never really been one house, or one town. We moved a lot when I was younger, and sometimes into places that wouldn’t necessarily adhere to the common definition of a “home.” But what has always been a constant is our dogs. Though some passed before I was capable of noticing them, and others have gone with tears and an aching heart, in some sense every dog we’ve had is still with me, with us, in the dog we have. I sort of see each special dog — with their own stories, and their own characters — as morphing into this analogous dog shape that’s followed me from childhood to now.

So what I mean to say is that home isn’t a house — it’s where my dogs feel most comfortable, where they can sleep with all four paws in the air, or curled at the foot of the stairs, or upside down on their towel with a toy still half-chewed in their mouths.

Picture of Finn — my own