For today’s episode of Expedition Science Special, we’re going to be doing an interview with Dr. Phil Tortell, who’s a professor at the University of British Columbia, who works on dissolved gasses and primary productivity in the ocean. He’s also my boss – I work in the Tortell lab at UBC – and he’s also a Principal Investigator on the GEOTRACES expedition. 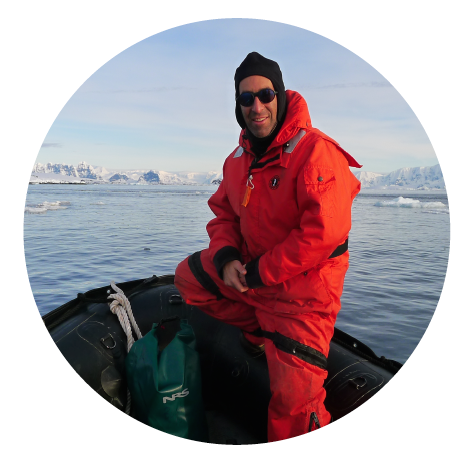 So, to start out with, broadly, could you tell the blog readers what the focus of your research is?

I study a number of questions related to marine primary productivity – that is to say, the production of organic molecules from carbon dioxide and light – that’s the process that all plants do – and we’re interested in knowing what controls the amount of primary productivity in different parts of the oceans, and how that process itself also changes the chemistry of the surface ocean. We’re also interested in studying the distribution of gasses that affect climate, like carbon dioxide, and methane, and nitrous oxide, and we’re looking at how those gasses change across different parts of the Arctic. We’re also really interested in sulfur gasses, like dimethylsulfide, that are produced by algae, and then go up into the atmosphere and influence climate.

So, you have a very broad research focus. Could you talk a bit about what the larger significance of your work is, or how it fits into bigger discussions that are currently being had in the public sphere?

Sure – so, in terms of primary productivity, understanding the rate of primary productivity in an ocean ecosystem is important because it determines the amount of biomass, or material, that can accumulate at higher trophic levels. So if you’re interested in fisheries or seal populations, or whales, the amount of biomass of fish or whales, or any other organism that lives in a marine ecosystem depends upon primary productivity. So understanding how much primary productivity there is now, and how much it may change in the future, when there’s less sea ice, or the ocean surface is warmer, is a really important question for understanding future populations of fish, for example. In terms of the climate-active gasses, the Arctic Ocean is changing quite quickly, and those changes may affect the amount of gas that comes out of the surface ocean into the atmosphere, and changes in the amount of gas could in turn affect what we call the radiative balance of the atmosphere – that is, how much sun is absorbed and how much is reflected, and that could also affect the trajectory of climate change over the coming decades.

What would you say your role is in this specific cruise, and in the GEOTRACES program?

I’ve been involved in this project from the very beginning, even before there was a real GEOTRACES program, at least for this project. Roger Francois, who is the other principal investigator and myself – we are both at UBC and work closely together on a number of different projects, and five or six years ago, NSERC announced that they would fund a number of large projects for climate change and atmospheric research, and we saw this and put together a proposal – he and I did a lot of the writing, and we put together a team from UBC and from across Canada – and we wrote this proposal to try to use that funding opportunity to do work in the Canadian Arctic. So I’ve been involved in this from the get-go, and I am one of the principal investigators – there are about 20 of us across Canada. Beyond that, of course I have specific research projects that involve a number of students, like yourself, so there’s  a sulfur project, a methane/N2O project, and primary productivity. So I’m here on the cruise running several pieces of instrumentation and also helping organize sampling for a lot of different parameters, and I’m also doing sampling for basic things like salinity and chlorophyll and just sort of helping out. So I’m kind of doing a lot of different things.

You’ve touched on it already, but why is the Arctic a particularly interesting place to do the sort of work you do?

Well, I think it’s interesting because it’s changing very very quickly, probably faster than any other –certainly marine- ecosystem that we know of, and those changes are particularly significant, because there are a lot – not in absolute numbers – but there are a lot of people that live here. Again, not a lot of people, but a number of communities, distributed all across the Arctic, so unlike places like Antarctica, for example, where there’s no natural or indigenous population of people, those changes actually affect people’s lives and they affect communities and so on. The other thing about the Arctic is that it is very likely to have very rapid increases in exploration pressure, vessel traffic, and Canada is not in a good position to understand  how the consequences of that are going to influence our shores. So I think we’re really in need of science and scientific information to help us understand why that system is going to change.

So when you’re in the field, in the Arctic, in these faraway, fairly remote regions, how do you practically conduct your research? What does your daily life look like?

Well, when we’re doing the gas measurements, we use automated instruments, and when they’re running well, which isn’t always, we actually don’t have very much to do. We check on them several times a day and make sure the signals are looking good, but they’re really set up to be autonomous instruments, and there we actually spend a lot of time extracting the data and looking at it and actually doing a lot of the analysis on the ship and making sure that we have an idea of what’s going on an understanding the conditions as they’re developing. But there’s also a lot of work that’s based on the collection of what we call discrete samples, or bottle samples, so we put bottles over the side of the ship and collect water at different depths and then we filter some of the water for certain measurements or store others in certain bottles that might get frozen and then there’s certain analyses that we might do. So it’s kind of a lot of different stuff – you’re out on the deck sometimes collecting samples, you’re maybe in your room doing some analysis, you’re in the lab checking different instruments, and that’s actually one of the things I like the most about it – you’re not just doing one thing, you’re moving around a lot.

What would you say is the most challenging about this sort of science work?

The most challenging, as you’ll appreciate,  is instruments that have a mind of their own and can give you no end of grief, and you think you’ve got it worked out, and then you have some problem, and you can spend hours and days sometimes trying to work it out, and it can be anything, from mechanical to electrical, and you’re always on your toes trying to troubleshoot these instruments and trying to make sure they’re giving you the kind of information that they’re capable of doing. So I think that working with the instruments is probably the most challenging.

So, you’ve obviously been going on expeditions for many many years. In your years as a researcher, as a scientist, what have been some of your most interesting realizations, or, if we say, discoveries?

We did a project a couple of years ago at Palmer station, which is a little research station on the northern tip of the Antarctic peninsula, so where Antarctica sticks  up towards south America. We had a program where we rotated people through and stayed in total about five months, and each of us spent somewhere between four to eight weeks on station with the sort of instruments I was describing before, measuring things like oxygen and carbon dioxide to follow primary productivity, this process of photosynthesis, and we were measuring basically every thirty seconds for about six months, so we were able to follow, with a lot of detail, the photosynthesis and respiration, or what we call the metabolism, of the plankton of the surface water, as well as bacteria and zooplankton, so little small animals that eat the phytoplankton. And by doing that, we were able to watch, or follow, the development what we call the spring bloom, the annual growth of algae and  photosynthesis in the surface. It was for me the first time I had realized that you can get a lot of information about a system without ever taking a single sample, without ever putting anything in a bottle, and you just have this autonomous little instrument, this robot, that you can just leave out there for six months, and you can learn a huge amount about how the system works, and when there is a lot of growth and when there isn’t. We could see for example whales, when there were big populations of whales that would come through and eat all the stuff and we could see the signature of that in terms of oxygen and CO2. That was a real highlight for me.

Thanks very much. Is there anything else you’d like to talk to our blog readers about today?

Well, you know, we had an interesting, in many ways unfortunate, experience on this cruise being delayed for about ten days in Hudson Bay as the ship got called off of science to do icebreaking and commercial vessel escort. And that experience really drove home for me that as a country, Canada is really not so well prepared for advanced science in the North, while balancing the obligations or responsibilities to do what we need to do to look after northern communities. We have aspirations to be a country that develops its North in a responsible manner, and I think those are good aspirations, but I’m not sure that we’re actually equipped to do that. We talk a lot about it, but I don’t know that we’re ready to do that. I don’t know if we’re ready to follow the changes that are going to happen in the north and make sure we understand that those changes are going in the direction that we want them to. I don’t think that we’re really ready to monitor the changes that are happening in the north.

I think that’s a sentiment that a lot of the scientists on board have been echoing, or discussing, as we sit in the Hudson for long periods of time.
I’ll end with the classic lighthearted question and I’ll ask you to share an interesting or a strange fact about yourself to conclude this interview.

Hm. A strange fact about myself… Well, I was born in France, in Paris, and for the first six years of my life I was only speaking French, totally francophone. Then I moved to a lot of places, none of which had French as a first language, so I lost a lot of my French, and it’s been interesting for me to be on a crew from a ship that is from Québec, where most people mostly speak French and seeing how far my French has slipped in the last three of four decades.

Yeah, the language dynamic on board is really a fascinating one. Thanks very much for your time, and for the interview.