The global economy is characterized by increasingly complex supply chains, spanning multiple continents and transcending dozens of national borders. The unfortunate truth is that complex supply chains are also marked by persistent human rights abuses, particularly modern forms of slavery. As recently explained, the COVID-19 pandemic “has exacerbated the root causes of forced and child labour…[and] [t]he risk of adults trapped in forced labour and debt bondage has also increased”.

In some cases, businesses know their supply chains are tainted with modern slavery or are, at least, wilfully blind to that reality. In other cases, businesses may not know or refuse to ask the right questions about their suppliers and subcontractors. In either case, more action by businesses and governments is needed to help ensure businesses are not relying on and benefitting from slave labour.

John Ruggie, the former Special Representative of the United Nations’ Secretary-General on the Issue of Human Rights and Transnational Corporations and Other Business Enterprises, explains that the complexity of transnational supply chains has created a growing number of “governance gaps”. Governance gaps “provide the permissive environment for wrongful acts by companies of all kinds without adequate sanctioning or reparations.”[1] These gaps mean that actors responsible for human rights abuses are not held accountable, and victims are denied remedies and access to justice.

Modern slavery – in all its forms, such as forced labour, child labour, debt bondage, forced marriage and domestic servitude, and trafficking in persons – is prohibited by international law[2] and domestic law in most countries.[3] Governance gaps emerge first through deficiencies in law enforcement in the country where abuses are occurring. The problem is that modern slavery often exists in countries that lack resources for effective legal enforcement, are ruled by corrupt governments, have weak rule of law, or exist in various states of social unrest or conflict. Of course, modern slavery also exists in countries with more developed enforcement capabilities but can go undetected for a number of reasons, such as the coercive tactics of abusers. 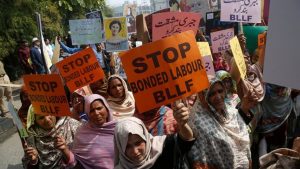 Deficiencies in international enforcement mechanisms also perpetuate governance gaps. Significant strides have been made by advocates in the international legal community to expose the connection between business activities and modern slavery, especially in countries with inadequate enforcement capabilities. There are, however, no international institutions that can independently or cumulatively deter businesses from benefitting from modern slavery and provide victims with remedies.

In rare cases, the International Criminal Court (ICC) may be able to prosecute members of the business community for complicity in modern slavery pursuant to Article 7 of the ICC’s enabling Rome Statute.

While the ICC can carry out independent investigations and gather evidence, it has several limitations that make it insufficient on its own to respond to the scourge of modern slavery.  First, the ICC only prosecutes “widespread and systematic” violations of international law, meaning that only the most serious alleged offences will be investigated and tried. There are many cases of modern slavery that will not reach this level of severity.  Second, the ICC can only prosecute “natural persons” – real people – and not corporations. Third, the court’s resources are limited, so even where cases are sufficiently serious, they may not be prosecuted due to resource constraints. In short, the ICC must build a case against each individual actor and only for the most serious crimes, when resources permit. It is plain that the ICC will not be able to prosecute many cases of modern slavery that should be pursued. While the ICC should certainly investigate corporate directors and employees who may be complicit in widespread and systematic modern slavery, it cannot shoulder the entire burden of holding businesses accountable, nor proactively prevent harms from occurring.

There is also a link between international trade and modern slavery, and in turn, there have been repeated calls – including by the administration of former U.S. President Bill Clinton – for the World Trade Organization (WTO) to help enforce international labour law. The WTO possesses a largely effective dispute resolution mechanism and has the capacity to enact sanctions – economic penalties – against its members (who are nations). One idea is that the WTO could incentivize its members to better address modern slavery through the threat of sanctions. Foreign businesses who operate in countries subject to sanctions could also no longer benefit from slave labour where they are forbidden from continuing business in those countries. Yet the WTO has repeatedly refused to deal with human rights matters and instead directs issues of labour trafficking to the International Labour Organization (ILO).

The ILO has also, regrettably, been criticized for failing to effectively enforce human rights, vis-à-vis international labour law and modern slavery.[4] The ILO has only the capacity to investigate violations of international labour law and make recommendations to its members. It does not possess a formal dispute resolution mechanism or the ability to provide remedies to victims.

Evidently, international enforcement mechanisms cannot consistently be relied on to ensure accountability for business-related human rights abuses. It is therefore incumbent upon domestic policymakers, of the countries where businesses are headquartered or import goods, to regulate business conduct abroad. Additionally, such regulation helps ensure that businesses who refuse to benefit economically from slave labour are not less competitive than businesses who do so. This is why in September 2020, 26 business associations, corporations, and business initiatives, worth a combined 350 billion EUR, called on the European Union to enact stricter supply chain accountability legislation. 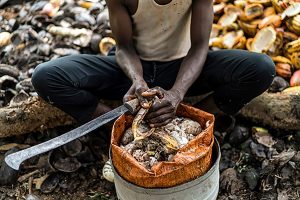 A farmer breaks apart a cocoa pod on the Ivory Coast.

The need for effective domestic regulation is explained in the United Nations Guiding Principles on Business and Human Rights, which also explain in some detail what effective laws might look like. The essential features of any effective legislation are: monitoring and reporting requirements; due diligence provisions, which require businesses to actively prevent harm throughout their supply chains; access to dispute resolution mechanisms and remedies for victims, such as monetary compensation; and import prohibitions against goods produced with forced labour.

A number of countries, such as France, the United Kingdom, the Netherlands, the United States, and Australia have enacted laws along these lines. In Canada, Senator Julie Miville-Dechêne proposed, for a third time, in October 2020, Bill S-216, An Act to enact the Modern Slavery Act and amend the Customs Tariff, which would impose monitoring and reporting requirements on businesses and ban imports produced wholly or in part by forced and child labour. Bill S-216, however, misses the mark by failing to implement due diligence provisions or guarantee access to dispute resolution and remedies for victims. Still, it is an important step in the right direction.

Why is this type of regulatory law more effective than criminal law at bridging the governance gap? Comprehensive supply chain accountability legislation could help proactively alter business practices, deter complicity in human rights violations, and prevent businesses – and consumers – from benefitting from slave labour. Such legislation targets the beneficiaries of slave labour where other actors, such as local governments in whose jurisdiction the harm occurs, fail or refuse to do so. It also levels the playing field for businesses by helping to ensure one business does not gain a competitive advantage by using slave labour. As it stands, the widespread tool of combatting modern slavery using criminal laws, can only respond to harms that have already occurred.

Policymakers in Canada and abroad might ask why should we be responsible for regulating our own businesses’ affairs abroad? The answer: because it helps protect human rights, prevent conflict, and creates a healthier global business environment. It is simply the right thing to do.

[1] UNHRC, ‘Report of the Special Representative of the Secretary-General on the Issue of Human Rights and Transnational Corporations and Other Business Enterprises’ (7 April 2008) UN Doc A/HRC/8/5 [Ruggie Report] at para 3.

[4] See, for example, a discussion of the ILO’s failure to enforce international labour law in Myanmar in Chantal Thomas, “Should the World Trade Organization Incorporate Labor and Environmental Standards” (2004) 61:1 Wash & Lee L Rev 347.

Alex Farrant is a 2L student at the Peter A. Allard School of Law working with the IJHR Clinic as part of the All-Party Parliamentary Group on Modern Slavery Team.