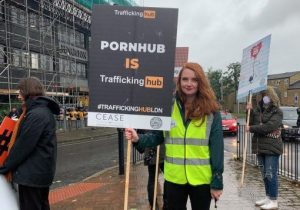 A protestor outside MindGeek office in London, UK.

Among the removed videos, many were likely illegal. Titles such as “Extreme Choking” and “Screaming Teen” suggest content containing CSAM, and non-consensual and violent sexual activity.

Statements like these sent shivers down my spine and I was left angry and sad, wondering how the world’s most popular pornography site was not held responsible or even scrutinized for almost a decade under Canadian law. This was just one of many stories shared by victims during the testimonies.

Similar stories were echoed in other victims’ testimonies. They all experienced difficulties trying to get their videos removed. They all shared the experience of lifelong trauma – childhoods, livelihoods, and even lives taken away.

Much of the testimony provided at the hearings has been conflicting, revealing the extent of Pornhub’s complicity in its content moderation. In Canadian criminal law, ‘complicity’, referred to in the Criminal Code as being a party to an offence by aiding or abetting the commission of the offence, can result in criminal liability. For organizations specifically under section 22.2, an organization is a party to an offence if a senior officer with “the intent at least in part to benefit the organization” and knowing that “a representation of the organization is or is about to be a party to the offence, does not take all reasonable measures to stop them from being a party to the offence.”

Pornhub’s Terms of Service, which Ms. Galy was told to follow, indicate Limassol, Cyprus as “the sole and exclusive jurisdiction and venue for any action.”:

When asked about this unusual corporate headquarters, Mr. Antoon stated “we are clearly living in Canada, we abide by Canadian law for sure.” He swore under oath that every instance of CSAM was reported to proper authorities.

The RCMP continues to choose not to act, even after 75 MPs and Senators, over 100 survivors, and hundreds of NGOs sent a letter in March 2021 advocating for the launch of a formal criminal investigation into MindGeek and its executives. For over a decade, the RCMP has failed to investigate MindGeek’s non-compliance in reporting instances of CSAM under the MRA, and has not provided an explanation for never beginning an investigation. The RCMP claims one of its main concerns is jurisdiction. MindGeek’s convoluted corporate structure stretching over jurisdictions including Canada, Cypress, Luxembourg, and the US,[4] has encouraged law enforcement here and around the world to turn a blind eye on their business practices. It is difficult not to question the motivations behind Pornhub’s multijurisdictional arrangement.

Profit maximization – at what cost?

Mr. Antoon is building his third known property, a massive mansion, that required a special municipal permit to cut down 220 trees from a heritage forest. 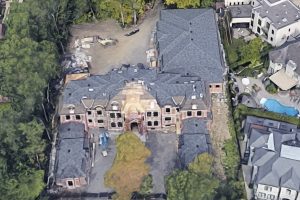 In stark contrast, victims like Ms. Fleites bear the socioeconomic costs of abuse, including being unable to return to school or work because of stigma, post traumatic stress disorder (PTSD), and other mental illnesses, which has led to their loss of financial security. 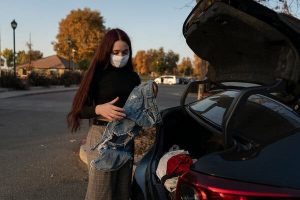 Serena Fleites, photographed living out of her car. Until recently, her victimization rendered her homeless. Photo by Rachel Bujalski for the New York Times.

It is no surprise that multinational corporations have been profiting from illegal and harmful acts, violating human rights and destroying lives. When convoluted corporate structures meet sophisticated online players with algorithms seemingly out of reach of law enforcement and lawmakers, the problems compound. Adding insult to injury, thus far platforms that host user-generated content enjoy impunity. For example, Pornhub’s Terms of Services, which were updated following the Times article in December, claim to relieve them of liability for content posted by users:

There are clearly gaps that need filling in the legislative framework to hold companies accountable for distributing CSAM: laws requiring internet content hosting companies to proactively gatekeep what gets shared on their platform. Requiring producers to verify the age and ongoing consent of all individuals appearing in pornographic content, would prevent the uploading of illegal material. The US introduced a bill in December that does this, but Canada continues to lag behind. The egregious impacts on victims that multiply once their videos are viewed millions of times are profound, and platforms like Pornhub make this level of harm possible. It is thus imperative for Parliament to adopt proactive legal approaches to adequately protect victims and the public at large from the creation and consumption of such harmful content.

Stricter regulation of the pornography distributing industry can promote corporate accountability, but all stakeholders have a responsibility to recognize the reality surrounding the creation, distribution, and consumption of CSAM and other illegal sexual material. Companies like MindGeek and XVideos were able to act with impunity for years because of pervasive rape culture and society’s continuing acceptance of discrimination against and commodification of women. The principles of equality underlying the Convention on the Elimination of All Forms of Discrimination against Women (CEDAW), which Canada has signed, prohibit this behaviour. It is time for Canada, the international community, and ourselves, as individuals, to take these obligations seriously and end the immunity for online platforms that facilitate and profit from the sexual abuse of women.

Christine Yan is a 2L student at the Peter A. Allard School of Law working with the IJHR Clinic as part of the All-Party Parliamentary Group on Modern Slavery Team.

[4] MindGeek is headquartered in Luxembourg for tax purposes. Most of the internet servers are in the US. The company is Canadian. Pornhub’s Terms of Service indicate Cypress as the ruling jurisdiction.