Unfortunately, I won’t be able to make it, as I have to work on my essays. I got an extension on one of them, though, so I can foresee getting through a few more days than originally deemed possible!

Posted in Academic, Around Campus, Recreation

The Wild Things Are at the Norm 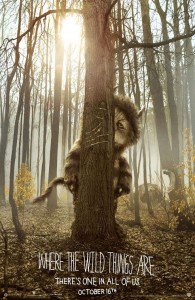 At least, they were yesterday!

Yesterday was the first time I went to the Norm to watch one of the Film Soc’s screenings (I’d been there before for events like Mental Health Awareness Day). The Norm is nice and comfortable, and tickets are cheap: $2 for members and $4 for non-members. (Membership is $10.) Some quick calculations at the beginning of the year told me I wouldn’t watch enough movies to get my money’s worth were I to get membership — I’m not a movie buff — but the Norm’s still an excellent way of getting the cinematic experience while paying less than the usual $10 fee.

I didn’t really mind waiting to see Where the Wild Things Are; I suppose the movie’s only interesting to those who grew up with the book. It wasn’t one of my favourite picture books, but I definitely wanted to see how it transferred to the big screen. My thoughts? It was surprisingly depressing. But judging by the incessant commentary coming from a group of three children behind me and my friend, it was probably much funnier and more interesting for them.

P.S. You can find the Film Soc’s schedule of future screenings here.

Comments Off on The Wild Things Are at the Norm

Posted in Around Campus, Recreation

An Ode to Save-On-Foods

If I had poetic capabilities, I would write one.

I did consider it, actually, but then I looked up how to write an ode and realised there was too much rhyme and metre involved for me. My rhyming capacity goes as far as “cat! bat! dat? that! ea- no, fat! gat? gnat!” You get the idea.

But oh (or “O!”), Save-On-Foods, how I love thee! Ever since you opened on campus, I’ve managed to just hop on the bus, get off in the next two minutes, grab a couple of vegetables, and then hop right onto another bus to go home. No longer do I have to do a week’s worth of groceries on Saturday and slowly watch my fresh fruits and veggies deteriorate by day five. As much as I like Sprouts (located in the SUB basement), sometimes there just isn’t much choice.

I’ve wondered how many people have realised that a new supermarket’s opened on Wesbrook Mall, though — I still see people lugging Safeway bags back from the bus loop. Clearly a lot of folks are still frequenting the Sasamat Safeway. Now, maybe people just like Safeway better, or think it’s cheaper (I think Save-On is cheaper, but no one I know has actually done a price comparison, so I wouldn’t know), or maybe they like the longer trip — sometimes I do go to grocery stores that are further out just because I like the trip there — but just in case you didn’t know about the new store yet, now you do!

Actually, I’m curious: where do you do your shopping (and why)? I’ve friends who will make the weekly trip out to the Canadian Superstore or T&T, without a car and all, because they want the cheapest deals they can find.

I like Save-On-Foods for its mid-week convenience, as I’ve mentioned above, but I also like making the trip to Choices or Capers when I can. It takes longer to get to these places than, say, the nearest Safeway (which isn’t actually that convenient either), but I like the choice of organic food I find there. These were some of the stores I investigated during my initial attempt at the 100-Mile Diet.

Tangent: I adore the idea of the 100-Mile Diet, but despite my valiant efforts to follow it when I moved out of rez (they were valiant efforts, really), stopped when I realised I couldn’t cook at all. Didn’t matter what kind of food you gave me; I promptly destroyed it in a complex series of mixing, stirring and frying. Give me the latest, most local produce and I produced something fit only for composting, if I knew how to do that. Give me ready-mix packages and I still had dubious results. Awful waste. Decided to learn to cook before anything more ambitious. Happy to say am improving slowly but surely. Maybe by spring I’ll be able to start again…?!

Posted in Around Campus

Initial Impressions of a Returning Student

Posted in AMS, Around Campus

Roaming Sprouts and The Well Cafe

Sprouts is a neat little organic food store located in the SUB Basement that I used to go for a quick, midweek fruit or veggie shopping trip. My home is not within easy access of grocery stores, so I tend to buy food over the weekend (or get my dear brother to do it for me!), but sometimes I just run out… Best of all, they stock food from the UBC Farm, a place I have much affection for, considering the short time I spent there.

Choice is very limited, given the small space, and even more limited during winter, so I haven’t been in a while. I dropped by for lunch there yesterday when every other place seemed to have a massive line, though: Sprouts serves bread and soup for the decent price of $3.75. The bread was a smaller slice than I’d envisioned, to my disappointment (I love bread), but the soup was served in a hearty bowl and was very satisfying. I recommend trying it out at least once; it’s certainly a very healthy option!

Unfortunately, hearty portion at 11 am or no, my appetite came flooding back with a vengeance by 3 pm and I went running down to the Village for food.

On my wanderings, I visited The Well Cafe. It’s a very tiny cafe situated in Regent College, on the outskirts of the Village. They have a bookstore specializing in Christian studies and the cafe is situated right with it. What I like best about the whole place was the seating — there were quite a few tables and comfortable-looking chairs well spaced out. The walls are glass windows, so people had sun pouring down on them while they worked, and it was very nice and quiet — not the mouse-like quiet you find in libraries, but just the normal quiet of a place that isn’t packed with people. I have no idea whether you can study there if you’re not a member of the College, but it certainly is the best place I’ve ever seen for it!

Posted in Around Campus