It is interesting how sometimes you have to see things from a distance to be able to appreciate them. For me, South America is one of those things. I love Colombia and my latin background, but I did not really understand what my background implied historically, politically, and culturally for this inherited part of my identity. Only as an international student in a ‘developed’ nation did I begin to comprehend so many aspects of the cultures that surrounded me for so many years of my life. Growing up I experienced the Colombian metropolis which Bogotá has become, the virgin beaches and dense rainforests in Costa Rica, and the remnants of a culture shaped by more than thirty years of dictatorship in the Dominican Republic. But all f these were merely facts and touristic attractions until I was able to experience first hand an intrinsic cause of the cultural differences between the north and the south of the American continent: the first believes itself to be dominant and the latter, dominated.

When I asked why it was that we held North America and European teachings at higher standards than our own, the reply was that I had to learn as much as I could from the more influential nations to be able to apply it in our less advanced socio-political systems. This seemed like the right way to go, until I attempted to define the ideas of development, solidarity, and progress. The privileged minority, both internationally and nationally, imposes in Latin America its idea of progress, culture, and ‘better’ onto the vast majority of people whose reality does not fit the cookie-cutter that is being used to mould it.

If I’m being honest, for many years I was blinded by my socio-economic status. In Latin America, I am one of the privileged. I like to tell myself that I was always amongst the more compassionate ones on my side of the spectrum; I always felt that urge to leave the world a little better than what I found it like. However, it was only when I came to live in Canada, a country in which the majority of people live over the poverty line, that I began to comprehend how deeply many of these ideas had been embedded into me. I was one to grow up believing that I had to leave Latin America because my education would be more valuable coming from a country that already had the knowledge to exploit another. I too believed that my contribution to society would be greater if I applied what I learnt from the ‘haves’ in a country of the ‘have-nots.’ What I didn’t expect to happen was that when I came to Vancouver I ran across the thoughts and lessons of people that had learned to see the value in every kind of knowledge. I had to leave to realize the value of the history and culture of my region, and how much they could contribute to me. It is only now that I question the model of development with which I grew up. Is it wise to assume that what the wealthy nations offer is always better? But with the momentum this assumption has gathered over the years, how do we make developing nations want to strive for a more environmentally, socially, and even economically sustainable future even when it doesn’t mimic the profit-oriented, resource-extracting model of the already developed nations?

Funny how sometimes we have to miss things in order to fully acknowledge their value. In being part of the privileged minority who is able to study abroad, I have become more and more eager to go back to where I came from, but to see it for the first time with the new eyes I have acquired. I still don’t have all the details about what it is i’ll do to make things better, but one thing I can tell you is that those beautiful countries filled not only with resources, but also people rich in culture, knowledge and traditions will have a lot to teach me before I’m able to give back to them. 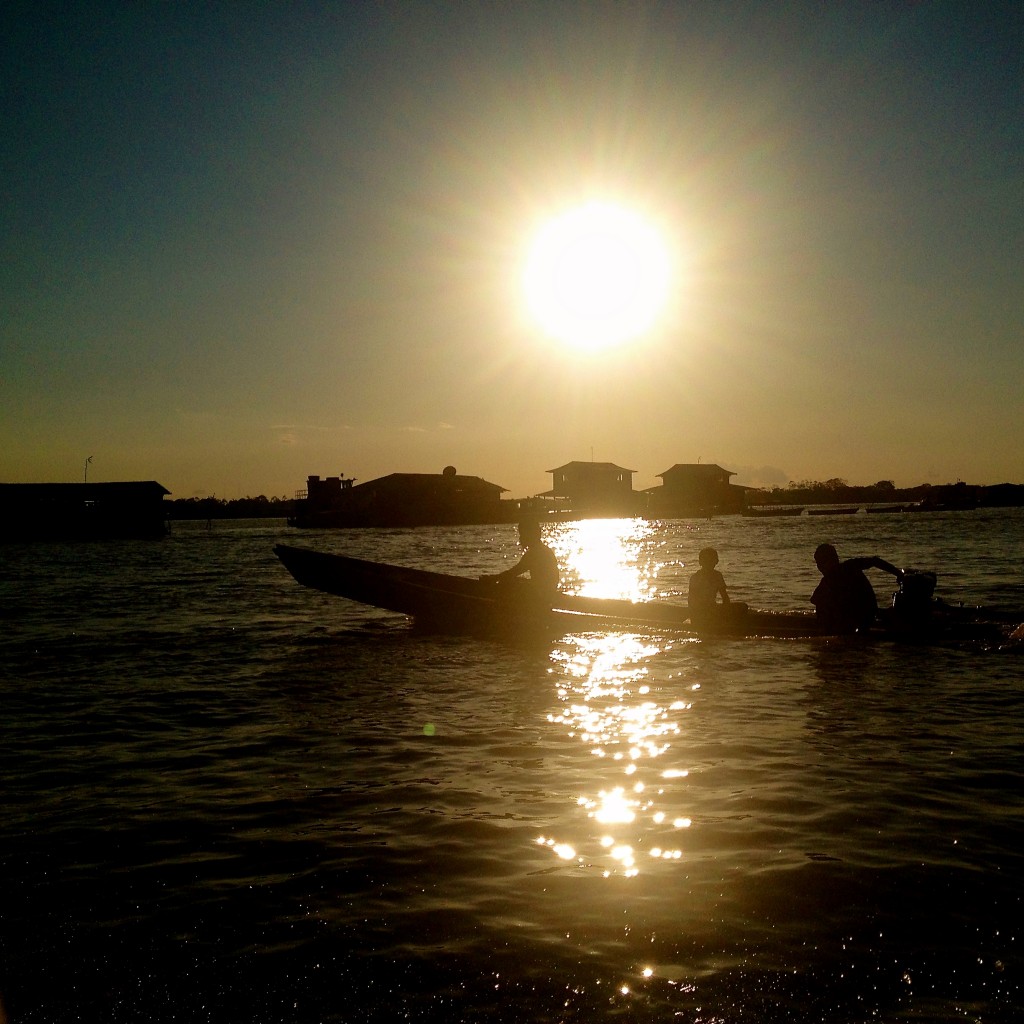 Fishermen’s Backyard. I took this picture in Leticia, the Colombian side of the Amazon rainforest in July 2014, just as the sun set over the floating homes of fishermen in the Amazon river.