Perhaps inadvertently, Joseph Davis provides an excellent example of narrative inquiry in his article, No Country for Old Age. This is a cultural narrative, a story of how life is and ought to be lived… a story of what it means to age, and as Davis points out this is a hegemonic narrative, one that compels us to be a certain way.

In our society, to come directly to my point, old age is understood and framed in ways that lead inevitably to its devaluation. Its status is low and arguably is falling. 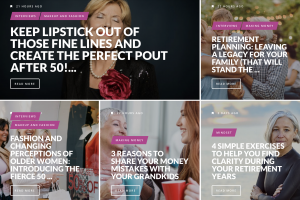 Davis highlights the role the burgeoning number of blogs play in defining aging, and how they promote defying age. He zeroes in on, Sixty and Me, a “community of 500,000 women over 60.”

Sixty and Me identifies itself as mainstream (no radical diets and exercise regimes). It is also full of advertisements, parts of posts written by experts, often with a product to sell to achieve the goal of aging as an independent, emancipated, enterprising and strong (youthful) woman. Celebrities, like Jamie Lee Curtis, set examples for aging… “If I can challenge old ideas about aging, I will feel more and more invigorated. I want to represent this new way. I want to be a new version of the 70-year-old woman. Vital, strong, very physical, very agile. I think that the older I get, the more yoga I’m going to do.” Aging requires more, not less work. “To look old is to be old.”

Davis looks also at other sources of this cultural narrative about aging… the pathologizing of aloneness into an epidemic of loneliness and the extreme medicalization of aging.

Loneliness has become a disease, one that will hasten your death and therefore must be warded off by vigilant attention to maintaining a social network as the antidote. This “loneliness” is caused by social conditions like high divorce rates, more single parent families, fewer close family networks.

Contributors to the public discussion frame loneliness itself as a kind of medical condition or disorder: It is something one “suffers from,” that is partly heritable, that has characteristic “symptoms” and “risk factors,” can become “chronic,” and needs to be “treated.” 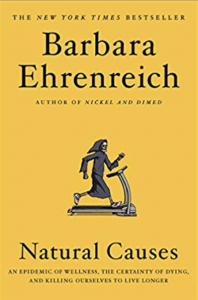 As loneliness is medicalized, so in general is aging. Rather than a phase in the ebb and flow of life and death, being old is an illness (one to ward off as prescribed in blogs) and one that makes older people ever more medically scrutinized. Barbara Ehrenreich’s book Natural Causes analyzes this same narrative. This is a narrative supported by stacks of  self-help books aimed at the aging (including Ehrenreich who is 76) telling them to think in terms  of “active aging”, “productive aging”, “anti-aging”, even “reverse-aging.” A long life is promised to anyone who makes an effort, regardless of factors such as genetics or poverty.

Ehrenreich focuses especially on health checks, not those that are in response to obvious symptoms, but those that search for hidden problems… tests that lead often to false positives and over diagnosis… bone density scans, dental x-rays, mammograms, colonoscopies, CT scans. In part the medicalization of aging is a lucrative business and this is especially true in the US where many older people have health care coverage for the first time in their lives. With a PhD in cellular biology she provides more than a cultural critique.

Davis concludes with this:

Current constructions of old age in individualistic terms of self-reliance, the fit body, productive accomplishments, or an imperative to deny or defeat aging technologically cannot but deepen our predicament and the need to render it invisible.

This narrative of aging is hegemonic, it frames a normative way of being that is difficult to resist and overcome.  But, many experience aging not as a failure and consciously chose a different narrative, one that sees aging as something other than a poor approximation of youth. Aging sets limits, often vulnerability and dependence, or as Ehrenreich says, “an accumulation of disabilities,” all of which might be framed not in terms of youth but rather  the ethic of a well-lived life.

Narratives of stages of life are profound and powerful, they are culturally constructed and often become hegemonic… fortunately, human storytelling abilities opens possibilities to overcome their oppressiveness.