Food is core to all cultures, it is part of the traditions, ceremonies, economics, cosmology, and social structure of any cultural group. On the surface, food is, well stuff one eats. But if that’s all it were then given our particular eco-environment we would eat whatever physically sustained us. Not true. Cultural anthropologists, food scientists, environmentalists, sociologists ~ folks often known as food scholars ~  study food as a window to cultural meanings and values. The Society for the Anthropology of Food and Nutrition is a good place to begin exploring the meaning of food and its complex intersection with every other aspect of social life.

Food as material culture
Food can be the window to ceremonies , to eating and health (Eating Right in America), to the artisanal food movement (The Life of Cheese), to globalism (Greek Whisky: The Localization of a Global Commodity), to social solidarity (in the allegory of long spoons in many cultures, and Foods, Farms and Solidarity). Where we prepare food matters, and Emily Contois’ Not Just for Cooking Anymore: Exploring the Twenty-First-Century Trophy Kitchen illustrates that kitchens are places where food, as well as social and cultural capital, are produced.

Food as Representation
Hungry Planet: What the World Eats illustrates how globalization, migration and rising affluence are affecting the diets of communities around the globe focuses on 30 families in 24 countries. Each chapter features a family photographed alongside a week’s worth of groceries. There are many images of families food shopping, cooking and eating, but the primary images are staged ~ the family in the background, and the food they eat in the foreground. Text describes the details or the week’s food, including the cost of the food. 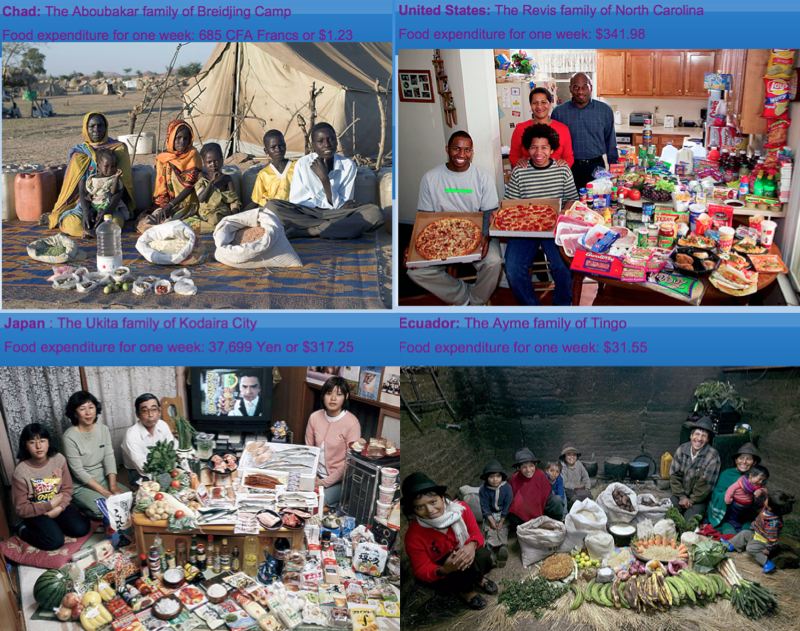 And, food and literature are always an interesting combination. A notable example is, of course,  Alice B. Toklas’s literary memoir disguised as a cookbook . Instructive as representation is Fictitious Dishes: An Album of Literature’s Most Memorable Meals, in which Dinah Fried cooks and photographs meals from famous fiction. Each photograph is accompanied by the passage in which the recipe or food description appears, as well as a few comments about the respective author, novel, or food.