TV Tropes is a rich wiki repository of resources described as tricks of the trade for writing fiction, but as social scientists we borrow as needed in trying to understand and explain the social world.

The emphasis is on tropes, which are described as:

Tropes are devices and conventions that a writer can reasonably rely on as being present in the audience members’ minds and expectations. On the whole, tropes are not clichés. The word clichéd means “stereotyped and trite.” In other words, dull and uninteresting. We are not looking for dull and uninteresting entries. We are here to recognize tropes and play with them, not to make fun of them… Since a lot of art, especially the popular arts, do their best to reflect life, tropes are likely to show up everywhere. 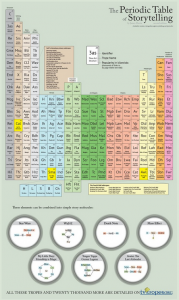 Narrative analysis can be facilitated by looking at the tropes at the centre of the stories we are investigating, and in the section on narrative devices one can investigate a range of possibilities. Tropes are named (such as “always need what you gave up,” “dead end job,” “dramatic irony,” “fighting for survival,” “human shield,” “I just want to be normal,” “shapeshifting,” “with due respect”), a short explanation is provided and links to many examples are given.

Other sections focus on characters, plot, setting and so on.

The wiki is a rich resource, every changing, including such gems as the Periodic Table of Storytelling.