A belated Happy New Year to scientists and those who are interested in science everywhere from us. I am afraid I still don’t get why the greeting is Happy New Years on this side of the Atlantic. Am I missing more than one of them? Anyhow, we apologize for not getting round to our usual fun post this holiday, but we have both been swamped by work and other commitments so the blog has had to take a back seat. Believe it or not this stuff takes quite a bit of work!

Nevertheless, there was lots of good humour abound at the end of 2014 and I was pleased to note another bumper crop of Ignoble awards for 2014. My favourite has to be  the Arctic Science Prize for Eigil Reimers and Sindre Eftestøl, for heir ground-breaking study testing how reindeer react to seeing humans who are disguised as polar bears. Absolutely brilliant, and I definitely want some advice on writing my next grant proposal from them.

After my last posting (and reaction) I was discussing with some colleagues how a good understanding of the philosophy of science and scientific practice still seems so elusive for many people, and how organizations spring-up everywhere that mimic the real thing to take advantage of this. I would characterize this as a failure of education, and sadly the results in modern society are actually quite profound. We see examples in extremist behaviour and positions (often resulting in violence), the search for overly simple solutions to complex problems, the adoption of magical practices by intelligent individuals, and of course, the usual mischaracterization of science as the antithesis to religion. You only have to look around the news or the web for examples everyday, with Oprah and Dr. Oz championing the latest magical nutritional fads, or homeopath’s claiming they can cure ebola.

I find one of the most fascinating aspect of all this the alternatives to scientific inquiry and dissemination that masquerade as science. Years ago as an undergraduate student I studied social anthropology, and was fascinated by the phenomenon of cargo-cults, which represents a useful metaphor here. The term cargo cult encompasses a diverse range of practices that occur in the wake of contact with the commercial networks of technologically superior colonizing societies. The name derives from the belief that various ritualistic acts will lead to a bestowing of material wealth of some sort (cargo).

The best known example is from World War II where contact with the Japanese and late Americans military in the pacific  brought about a considerable transformation of the indigenous peoples of Melanesia (Ton, 2009). At the end of the war, the military abandoned the airbases and stopped dropping cargo by parachute to their units. Those technological products that had been seen or been available to the Melanesian islanders through the colonizing armies, disappeared or became in sort supply. In response, charismatic leaders arose amongst remote Melanesian populations and developed cults that promised to restore on their followers deliveries of these goods (such as food, arms, radios, vehicles etc.) The leaders explained that the cargo was really gifts from the gods or ancestors, and in attempts to get cargo to fall by parachute or land in planes or ships again, islanders imitated the same practices they had seen the military personnel use. They mimicked the day-to-day activities and dress styles of US soldiers, such as performing parade ground drills with wooden or salvaged rifles, and in a form of sympathetic magic, many built life-size replicas of aeroplanes out of straw and built mock airstrips complete with wooden control towers to encourage aircraft to land (as shown in the picture below). 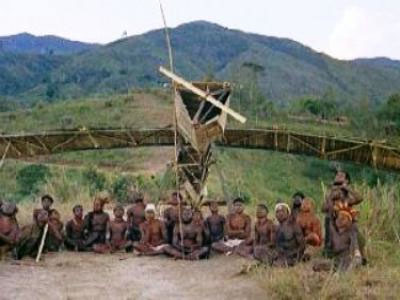 Even though the cargo never arrived the leaders maintained their cults for years as the social benefits of belonging to the group persisted, and they provided hope for the elusive products in the future. Today the original cults have almost disappeared but some cargo cults are reportedly still active today (Raffaele, 2006).

The term “cargo cult” represents a useful metaphor to describe an attempt to recreate successful outcomes by replicating circumstances associated with those outcomes. However, the circumstances mimicked are either unrelated to the causes of outcomes or insufficient to produce them by themselves (in the former case, this is an instance of the post hoc ergo propter hoc fallacy). The metaphorical use of the term was popularized by physicist Richard Feynman at a 1974 Caltech commencement speech, which later became a chapter in his book Surely You’re Joking, Mr. Feynman!, where he coined the phrase “cargo cult science” to describe activity that had some of the trappings of real science (such as publication in scientific journals) but lacked a basis in honest experimentation.

The term seems to have fallen out of common use today, but I would suggest we are seeing boom times for cargo-cult science today and its time to resurrect it. Recent examples include journals that purport to be scientific but are not (see our recent post of predatory publishing), many CAM therapies, naturopaths, and the growth of the Integrative science movement.

Times are tough for real scientists, and I sometimes think it would be easier to join the masses of new-age practitioners rather than keep up the struggle for good quality scientific health care, and be characterized as the allopathic dinosaur (soon to be extinct) in the face of the new age of integrative healthcare. The trouble is, I just can’t bring myself to nod sagely next time someone suggests that “sciencing the art sheds light on the meaning of universal living experiences…” Nor can I sign-on for this sort of nonsense for an easy academic life, as I fear it’s patients who actually loose out here. What the heck, maybe I’ll just go and build an effigies of Dr. Oz and Dora Kunz on the roof and see what happens…