Prompt: Following Carlson’s discussions on literacy as “part of a broader genre of transformation” (61), try to explain what he means when he says that transformation is an “act of literacy.” This can be confusing at first, but if you follow his discussion beginning with “how Salish people understand the process or act of transformation in relation to literacy itself” and pay attention to how he uses etymology to shape his insights, you should be able to extract an explanation for conceptualizing transformations as writing and as readable.

Words and understanding go hand in hand. The purpose of language is to express feeling, concepts, and information. According to the Merriam Webster online dictionary, literacy means two things. 1. “The ability to read and write.” and 2. “Knowledge that relates to a specified subject. I find the second definition eye opening.

If we choose to use “literacy” in its second definition, we allow ourselves the freedom to learn in whatever way we see fit. This may include learning by oral tradition,  haptic tradition or by visual tradition. Literacy is defined as a “knowledge that relates to a specified subject”, and written literacy is only one part of learning as a whole.

The word “Learn” according to the Merriam-Webster Dictionary means “to gain knowledge or understanding of or skill in by study, instruction, or experience”. This is interesting to note, as we see the semantic similarities between the two words. One is a verb and the other is a noun but the meaning is the same. One may learn (the process of acquiring knowledge) , and once that knowledge has been ingrained, one has become literate (or has access to “knowledge that relates to a specified subject.)

We understand that the purpose of reading and writing is the dissemination of information. Learning is its ultimate purpose. We can use our written language skills to record valuable information, teach others without the need for precise memory, tell stories, write instructions, draw maps, the list goes on. Reading and writing are valuable skills that help us to advance our collective knowledge.

It makes sense that European people would see this knowledge as a gift, and we can understand the reason behind why our misguided, forceful attempts to help “better” our First Nation’s neighbours was pursued in the first place. We also can begin to understand why one possible reason European conquerors felt intellectually superior to First Nation’s people. Europeans wielded an incredible skill that allowed them to socially, technologically and politically dominate First Nation’s people, and pass that knowledge on to subsequent generations on mass.

It is interesting that Carlson says that  “transformation is an act of literacy”, but what does transformation mean?  The Merriam Webster Dictionary has three different definitions.
1. “to change in composition or structure”
2. to change the outward form or appearance of”      and
3. “to change in character or condition”

We see in countless stories of the Salish people, that spirits like Coyote and Raven who can “transform” (using the 2nd definition) into different physical states. Often physical transformation is a punishment, is was the case of the three elders who refused to teach their people written literacy, or in the case of a murderer who eventually became the The lake demon Naitaka (or Ogopogo) in Okanagan lake. 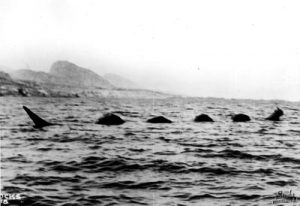 The purpose of the punishment (in the story of the Naitaka, which I heard during the potlatch ceremony, when I was 10) was to transform the murderer of a man named “Old Kan-He-Kan”,  physically into a demon who was then forced to continue killing at the scene of his crime. This punishment was to reflect the evil in his heart. His physical self was to match his emotional self.  The story is that then name Okanagan was named for Old Kan He Kan. Although, it is my understanding that was a Caucasian misunderstanding and appropriated meaning.

My point in telling this story is to highlight Carlson’s meaning. The physical transformation of Naitaka from the gods, was meant to force Naitaka into understanding that his deed was foul by forcing him to relive his worse moments forever.

So how does this relate to literacy? If we view transformation as 3rd meaning, “to change in character or condition” we begin to understand how literacy and learning works. When we have no knowledge or understanding, we live in state of ignorance. Our view of the world is coloured by that ignorance and so to are the choices we make. As we learn, our character is changed and so our literacy marks our transformation from ignorant to learned.

Now how does this relate to written literacy?  Written literacy is simply a vehicle for learning. It is a powerful vehicle that allows the dissemination of information to be used quickly and at a large scale. With the opportunity to devour more information quickly, the transformation process from ignorant to understanding is sped up.

In the story of the three chiefs, Peters states that The great spirit had gifted the ability for written language to three chiefs. These chiefs were charged with bringing this knowledge to their people. They failed and the great spirit transformed them to stone. Why stone? Stone represents stagnation. It is an unchanging element. It can not grow. This physical transformation is fit as it mimics the loss of written language to the First Nation’s People. The Three Chiefs cannot grow as they are stone, and neither can their people as their tool (written language) has been lost.  (Carlson 43)

In the story of Coyote and the king. The same sentiment of transformation in regards to written literacy is mirrored.  We see that the Indian Law written by the Queen is kept hidden, much like literacy its self, in order to keep First Nation’s people subjugated. The sentiment is that if all First Nation’s people can read, they will be able to read the black and white and then challenge European conquest through understanding and literacy.  (Robinson 85)

If this story is equal parts historical and prophetic, I believe it is beginning to come to fruition now. In 2018, The University of Victoria has launched the world’s First Indigenous Law Degree. This is the collaborative efforts between First Nation’s and Parliament. Although the battlefield was chosen by the state, there is opportunity for fair play.