Grappling with Ghosts in the LGLC 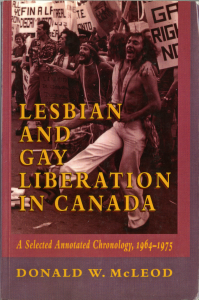 of the projects housed here, at UBC Okanagan SparkLab, is a digital archive project researching, encoding and graphing the Lesbian and Gay Liberation movement in Canada. I was brought into the project in September (at the beginning of the 2014 fall semester) and there has been a lot to learn as a research assistant with limited encoding background.

The major part of the project that I am involved in uses TEI (the Text Encoding Initiative programming language) to mark important information in the text, (such as names, dates, locations, etc.), that will be then translated into Cypher (a programming language used to make graphs), and fed into a database called Neo4j.

The resulting web graph is comprised of dots (nodes), that represent people and places or events, and lines (edges) that connect these nodes and describe their relationship to one another. 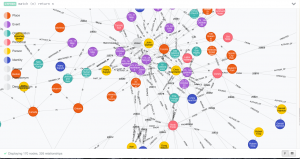 Using Neo4j researchers who are interested in the movement can query the database to see the connections between key players in the movement as well as their involvement in demonstrations and events.

One of the problems that our team has come across while encoding, has to do with someone who could be considered a major player in 1977. Anita Bryant, former beauty pageant queen and spokes person for the Florida Citrus Commission, is mentioned frequently throughout 1977, organizing events and rallies in opposition to the lesbian and gay liberation movement. For example, Bryant and her husband Bob Green lobbied for a public referendum that repealed a recently passed law restricting discrimination based on sexual preference, in June of that year. Until this point, there were few people mentioned within the text as antagonists to the gay and lesbian movement, meaning that Anita Bryant would be represented within the database the same as the people that worked so hard for the lesbian and gay liberation movement.

This particular problem of representation is fundamental to all researchers and archivists because it forces us to re-evaluate what is important, and what will be important to future researchers. The solution to this problem is quite simple but it opens the door to larger questions: How do we decide who is an antagonist in the movement and who is not? Is it important to make this distinction within the graph, or is it enough that the text shows what side she is on? What if there is a case where someone doesn’t necessarily fit these distinctions, or they change their actions the other way later in the text?

In a nutshell, what we are trying to do with the LGLC is create a tool that represents a history of oppression, rebellion, and liberation. The question of how to represent Anita Bryant is one of those great problems of humanism in the digital age. As researchers and archivists, we are grappling with the ghosts of history and who they were.