The environment that we have the most interaction with is that near where we live, work and play.  The shape of that landscape is largely determined by the decisions of local governments, governments that have, by provincial law, been given the authority to plan land use.  These local governments operate within the constraints of the provincial legislation that defines them, and that puts some limits on their decisions.  The Agricultural Land Commision Act (which created the Agricultural Land Reserve) being a particularly prominent policy in this province. 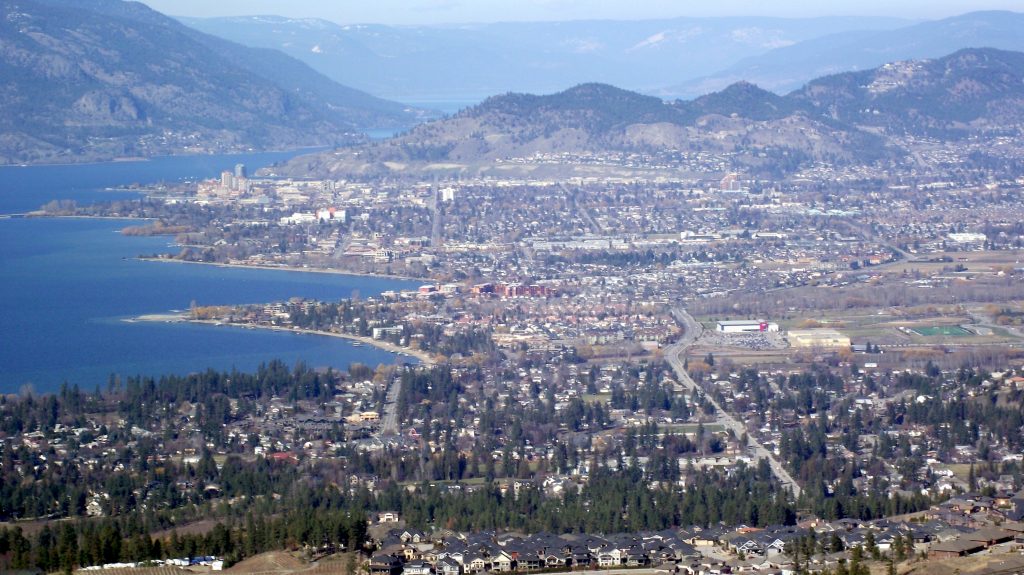 Many communities in British Columbia adopt an official community plan (OCP) and some are required to.  That plan must be consistent with the Local Government Act.  The first required item listed in the Act is:

(a)the approximate location, amount, type and density of residential development required to meet anticipated housing needs over a period of at least 5 years;

As I read this, my interpretation is that an OCP cannot say that a community is ‘full’.  It is a growth management plan, a plan to manage the shape which growth in population and the economic activity that growth brings with it takes within the community.  The OCP cannot put limits on growth to protect the environment.  It can only seek to direct growth in such a way that impacts on the environment are minimized.

An OCP is adopted as a bylaw by the local government.  While it would be bad form for a local government to adopt an OCP and then ignore it, the plan can always be amended, and any property owner within the area covered by an OCP has the right to ask for an amendment to the plan, to allow an activity inconsistent with the plan as adopted.  The local government must consider every such application.  Therefore, an OCP is far from final, even for the period over which it is intended to apply.

The City of Kelowna is soon to host a public hearing on OCP 2040, the plan that is to provide some guidance to Kelowna’s growth over the next 20 years.  The process of consultations, engagement with citizens, forecasting, etc. for this OCP update has been going on for almost four years.  Somewhere around 3,000 submissions of various forms were received as part of this process.  In parallel with the early stages of developing the OCP, the ‘Imagine Kelowna‘ initiative was undertaken to engage citizens of Kelowna about the future they wanted to see for the community.  Almost 4,000 citizen contributions were made as part of this process.

These consultation processes resulted in a set of pillars seen to represent the values expressed through the engagement.  The figure below, taken from the draft OCP, illustrates these pillars. 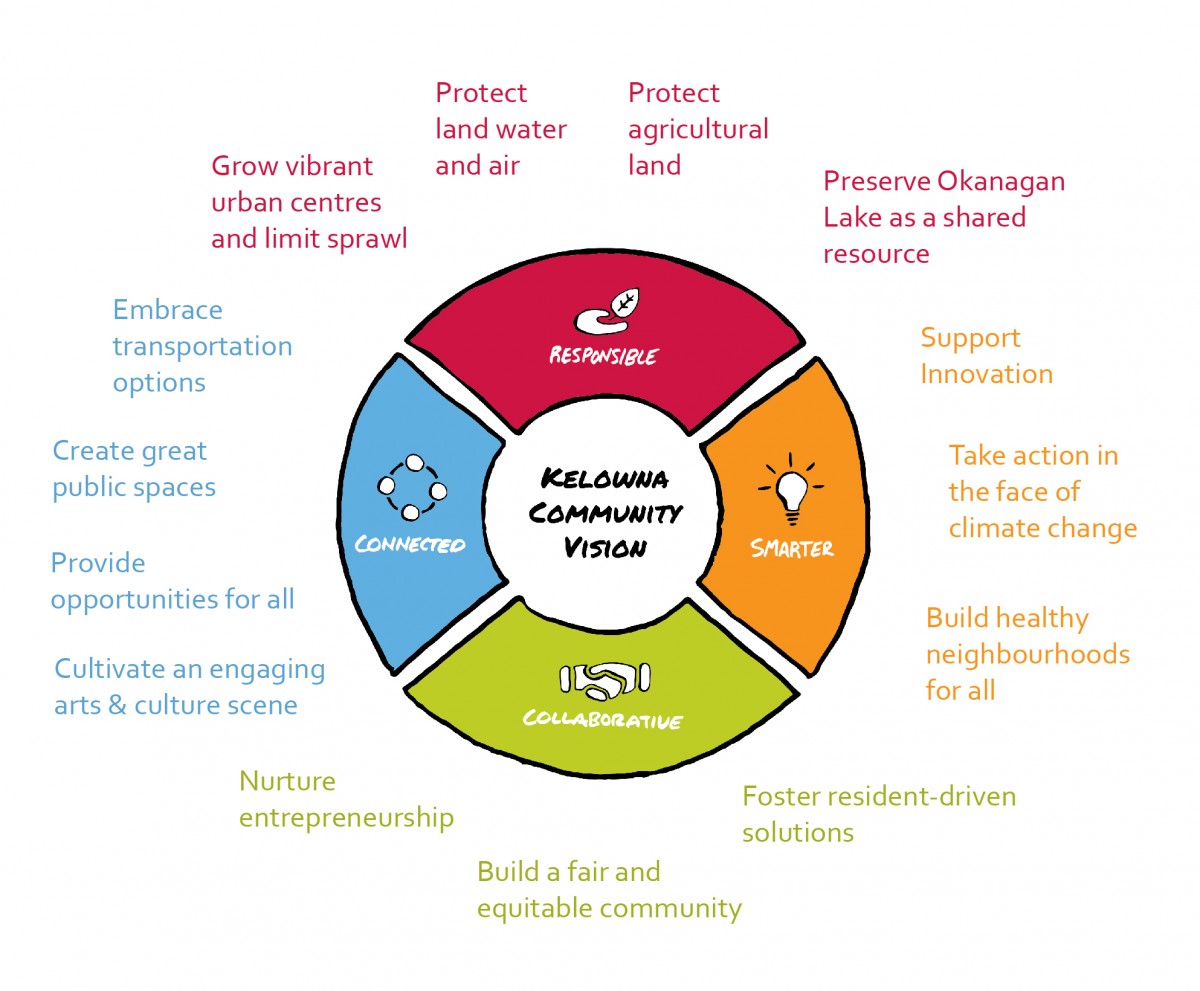 This engagement process is an important first step in the land use decisions made by local government.  Unfortunately, giving ones time to provide input into the vision or plan does not mean that the resulting set of principles will actually guide growth and development.  There are a number of further steps that are critical to determining how the values expressed through these engagement process actually impact on land use. 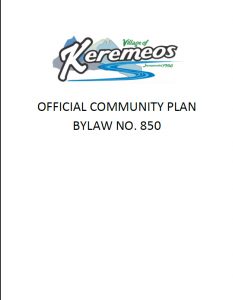 Where the planning process was expensive and occured over a long time, council is generally loath to vote against it.  That would look like council wasted time and money on an exercise they were not taking seriously.  The largest threat to an OCP at this stage would be an election that voted in a new council which is openly hostile to the instructions provided to staff by the previous council.  Where the council voting on the draft OCP is substantially the same as the council that initiated the process, it is likely to pass first reading.

Once the OCP bylaw is passed first reading, a public hearing must be held.  This requirement exists because “all persons who believe that their interest in property is affected by the proposed bylaw must be afforded a reasonable opportunity to be heard (465(2)).”  As written in law, the public hearing process is to give an opportunity for those whose property may be adversely impacted an opportunity convince council to not adopt the plan. Of course, if they are not successful, they have the right to ask for amendments to the plan.  The public hearing provisions read like those expressing broader environmental or social concerns that do not affect their interest in property do not have any right in the process to have their concerns heard.  Note that the broad consultations undertaken by Kelowna are recommended but not required. 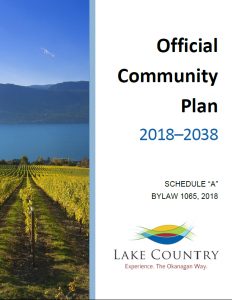 Once the required public hearing is complete, council then again votes on adopting the OCP.  If they do vote in favour, it is then adopted, and becomes the official planning guidance for the community, subject of course to the inevitably requested amendments.  These amendments themselves require public hearings if they are substantial enough to be clear deviations from the OCP.  Property owners can keep trying to get their desired development plans approved, hoping to somehow change the opinions of enough councilors or that there are enough council seats that change hands to secure that approval.  Standing firm on defending the OCP may lead to approval of even less desirable development in future if that firm stance galvanises opposition and leads to electoral defeat.

Learning about the relationship between the OCP and local government land use decisions has driven home to me the very important role of the elected council.  It is this council that gives the directions to staff about what is to go into the plan, they are the ones who vote on its acceptance and interpret any input received through pubic hearings.  They are also the ones who vote on amendments to the plan.  While the plan cannot prioritize environmental protection over population and economic growth, it can provide direction on how to minimize the environmental impacts of accommodating that growth.  To do so, it demands a council that both requires that the plan focus on minimizing environmental impacts, and then sticks with the plan when land owners ask for amendments.  That council is elected by the people in the community who vote.  If those councilors do not have the support of a reliable voting block that wants the OCP to be honored, then it won’t be. 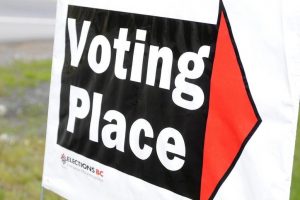 In Canada, about 61% of those over 25 years of age vote in local elections (Statistics Canada).  Only about 41% of those younger than 35 vote, with the share participating increasing by about 10% per decade of age, until capping out at about 75%.  Older people are more likely to own property, and therefore have the value of an asset they own affected by the decisions of their local government.  Younger people are less likely to own property, and will find it easier to move to another community that may better reflect their preferences.  If these younger voters are not property owners, the local government act confers on them the right to vote, but no obligation on the local government to address their concerns comparable to the obligation local government has towards property owners.  Unfortunately, this rational calculus against younger people participating in local elections applies in all communities, and therefore nobody is protecting those ideal communities that the young voter might like to move to.

The best hope for addressing larger social and environmental concerns would be through amending the Local Government Act.  Amendments have been made over the years, with the current act requiring OCPs to include addressing the need for “affordable housing, rental housing and special needs housing (473(2)).”  It also must include “… targets for the reduction of greenhouse gas emissions … and policies and actions … (473(3))”.  At present, the Act does not appear to include sanctions when these issues are not considered in the plan or not implemented.  However, the province recently exercised its powers to override  Penticton’s planning authority to ensure continued operation of a homeless shelter (CTV News, Castanet).  While the matter is before the court, any ruling against the province could be addressed through the provincial legislature amending the relevant provincial laws. 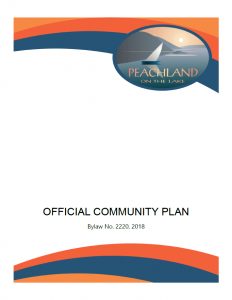 People who want to see progress on social and environmental issues need to understand the relationship between local voters, local property owners, and local government, and the role of the provincial government in proscribing aspects of these relationships.  Councilors who are willing to promote policies that minimize the environmental impacts of community population and economic growth, against resistance from property owners, need to have the support of local voters.  Such councilors cannot make a difference if they cannot get elected.  At the same time, voters need to recognize the important role of provincial legislation, and vote for governments that will adapt the Local Government Act and related acts so that local government is required and rewarded for making progress on social and environmental goals.

I have great admiration for all the young people participating in “Fridays for Future” and similar activities demanding action to address climate change and other social and ecological challenges.  I think those voices need to have impact at local and provincial elections here in BC if the action being demanded is to occur.

Get informed, get involved, vote!