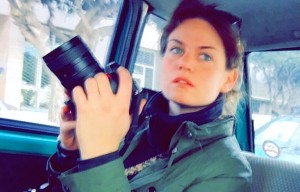 Kelsey’s inspiration began when she started making music videos and experimental shorts in her backyard with the family video camera. From that point on, Kelsey’s interest and passion for film grew. Taking a video production course in high school pushed her to pursue a career as an environmental documentary filmmaker.

Studying in Buenos Aires at the Universidad de Belgrano and at King’s College in London, Kelsey obtained a Bachelor of Arts in Film and Digital Media with a Concentration in Production from the University of California, Santa Cruz.  She holds an M.A. in News and Documentary Journalism from New York University.

Kelsey is strongly rooted in the community of Santa Cruz and volunteered at Community Television of Santa Cruz County. Her first documentary, A Green Beginning, was introduced at the Santa Cruz Film Festival in 2006 and she has been dedicated to the community of Santa Cruz and environmental projects ever since. In 2013, Kelsey became a board member for the Santa Cruz Film Festival, and she was promoted to Secretary of the Board in 2014.  An avid and inspired globe trotter, she aims to share environmental/political topics and issues with the world through documentary journalism. Kelsey believes that film is the ultimate medium to capture reality.

Learn more about Kelsey and her films at her website, kelseycdoyle.com.